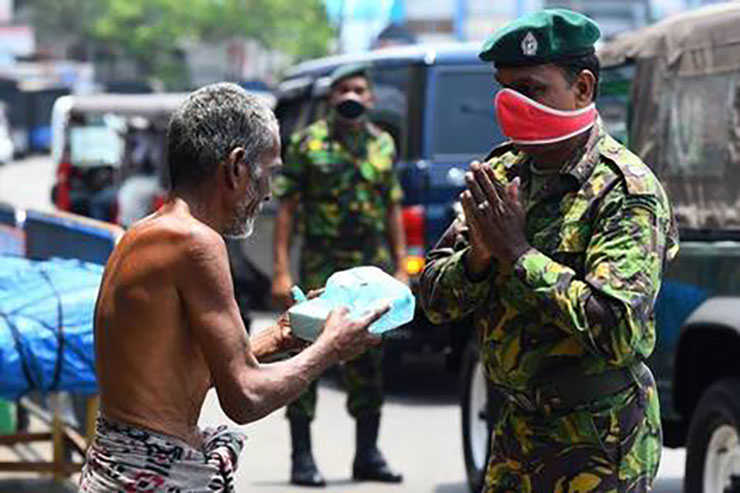 Dear Members of the UNHRC,

We, the citizens of Sri Lanka have a long proud historical past. We lived as one community under the Sinhale kings peacefully and you may like to wonder why there is not a single example of conflict between the communities before the arrival western colonial invaders to our shores in 1505. The answer to that harmony before 1505 and disharmony after 1505 is the divide and rule policies of these western colonials who plundered our resources and murdered our people.

We, did not know to identity people as black, white, brown or yellow – the western colonials taught us how to

We, did not know of dividing ourselves as majority & minority – the western colonials taught us how to

We, did not know of nomenclatures as ethnic, race, rights, freedoms etc – the western colonials taught us after taking away those very rights from us

We, did not know that education came only after conversion – the west taught us this too.

We, did not know that education, conversion also meant thinking and behaving like them – the west taught us this too.

We, did not know of covert and overt operations – if our kings disagreed on anything, they fought, they led from the front and they showed by example. The new wars and conflicts are planted by unknown forces, aided and abetted by foreign governments and they in turn send people to solve the conflicts they create wanting the solutions to be in favor of them, which was why the conflicts were started.

We use this as the basis to understand how & who would have inspired 18 year old Prabakaran to start a youth movement in 1972 (the very year Sri Lanka became a republican denouncing British monarchy) which turned into an armed movement in 1976 alongside the Vaddukoddai Resolution by Tamil politicians to declare a separate Tamil state. These were no coincidences.

We, want to ask how many in the international community, diplomatic corps and the UN have actually studied Sri Lanka’s problem and are aware of the colonial role in dividing our people, inciting the minorities against the majority, steering their demands that led to political movements demanding a Tamil separate nation in 1949 with the formation of the Federal Party known as ITAK.

We, want to know how many in this international community have wondered to ask why ITAK would wish to demand a separate state when all this time all the communities in Sri Lanka were living under foreign rule and administration and questions what was the discrimination ITAK was subject to, to demand a separate Tamil nation in 1949.

We want to know why the same international community was ready to pounce on the Sinhala majority when they demanded the return of the Sinhala language by presenting a bogus notion that the Sinhalese were demanding this to subjugate the Tamils. At no time in history has the Sinhalese subjugated the Tamils. It was only what the invaders and their English educated brown sahibs were taught to claim.

We want to know why the international community is always mum when our PM introduced the social disabilities act in 1957 enabling low caste Tamils to enter school for the first time and the British taught English educated Tamil high caste leaders weathered the seas to travel to UK to beg the privy council to annul the Act. If the official language act in 1956 was more damaging to the Tamils, why didn’t they travel to UK the year before? To Tamil high caste leaders, denying their own people the right to education was more important that they braved the seas to protest! We would like the international community & UN to look into this past neglected history.

We want to know how much the international community & UN have looked into the actual objective of standardization which was to allow more deprived members of the society in all communities to enter school and universities which again the high societies of these communities objected as only they wished to be the privileged lot. It would be good for the UN to further study these ground realities.

We want to know why the UN allowed LTTE armed militancy to go from a handful of youth trained in India to become the world’s most feared terrorist organization. What actually did the UN do to stop the LTTE from becoming not just any ordinary terrorist movement but one that had its own military, air force, sea force and was having functional headquarters and offices operating from foreign countries. What were these foreign intelligence doing other than allowing illegal arms smuggling, tiger propaganda and even allowing foreign MPs to attend tiger events?

We want to know what UN and the international community could have done other than write the same emotionless statements each time the LTTE carried out a suicide attack, assassination, planting bombs in passenger buses, trains, public places etc — we didn’t see UN asking accountability or questioning the LTTE or its leaders in foreign countries – why?

We want to know what the UN did about LTTE’s recruitment of child soldiers, other than compile reports. What did their NGOs do, stationed next to LTTE offices watching LTTE recruit kidnapped children?

When GoSL pardoned the last of the surrendered 594 child soldiers, didn’t the GoSL achieve what UN/NGOs & INGOs could not do in 30 years?

When GoSL ordered its National Army to defeat the LTTE, didn’t the GoSL & national army achieve what UN/INGOs could not do in 30 years? Is the UN/INGOs more interested in allowing people to live in peace or to allow LTTE terror to prevail?

When GoSL & its National Army bring to safety close to 300,000 Tamils who were kept hostage and as human shields by the LTTE – UN/INGOs or diplomatic community didn’t save them but the national armed forces did.

When UN/IC & TNA were more interested about the LTTE – it was the GoSL and the National Armed Forces who strategized to carry out a humanitarian rescue operation sacrificing over 6000 armed forces personnel to save close to 300,000 Tamils. Even the ICRC & international terrorist experts are on record to say that the Armed Forces could have easily ended the conflict using the full force of its weapons and not bothered about the civilians with LTTE, but they didn’t and this delay cost them over 6000 soldier lives. Has the UN/IC or diplomats spoken a word about the sacrifices they made.

When there are over 50.8m IDPs and 79m refugees, without solving these issues why is UN/IC bothered about Sri Lanka?

When there are conflicts in all but 11 countries in the world, what has UN/IC and diplomatic community done to stop the conflicts, end terror or in the least prevent arms and ammunition getting to these terrorists and allowing international monetary support for terrorists?

When Sri Lanka took pains to set up its own home-grown rehabilitation, resettlement and reintegration program, is that the problem the UN/IC and diplomats have because these are home-grown programs?

When Sri Lanka ended a conflict after the western formulas failed, to allow the people live in peace after 30 years – what is the problem UN/IC and diplomats have?

When UN/IC did not bring a single resolution in the UN against LTTE, we want to know what necessitates 3 resolutions, an OISL resolution and non-stop harangue against Sri Lanka?

How many times has the UN rapporteurs or UNHRC Head visited victims of LTTE as against visiting LTTE?

When US/NATO have been bombing countries to the cave days – what has the UN/IC done against these bombing campaigns?

When the leader of Libya was killed while the US President and his generals were watching, what questions did UN/IC pose to them?

When US and EU countries were arming bogus rebels’ against Libya and Syria, what did the UN/IC do

When US uses even unmanned drones and for every civilian killed these deaths are put as ‘collateral damage’ – where were the questions and resolutions against US/NATO similar to that being alleged against Sri Lanka? Why this hypocrisy – why are some countries targeted by UN/UNHRC and other are not? We demand an explanation.

When UNSG appointed a personally commissioned panel that had no mandate of UNSC or UNGA, how in the world did this report become the foundation of resolutions against Sri Lanka? Where were the ‘independent legal experts’ in the UN to point out this illegality?

When this legally questionable report was used by the UNHRC Head to recommend investigation and extensively quoted without tabling the report in either the UNSG, UNGA or UNHRC allowing Sri Lanka to officially respond, where were the supposed to be independence of the UN?

We want to know how in the world the UN and its so-called experts can even claim there is war crimes, crimes against humanity when they have not seen fit to ask ‘where the damn dead bodies are or even the names of the supposed dead’ to claim they were intentionally killed. The lack of this basic evidence ends all allegations against our armed forces.

We, want to know why the UN/IC have so much hatred for our national army that ended terror and gave us peace. Does the UN/IC wish us to live with LTTE suicides, assassinations and bombs?

We have a bigger problem, we want to know why the UN/IC are claiming to seek answers for accountability for the last phase of the conflict but are nit-picking on 75% of non-conflict related items with each resolution and UNHRC report and then plugging the word ‘war crimes’?

We want to know why these non-conflict related items cannot be taken up at the UPR instead of plugging these into conflict-related resolutions and presenting a totally wrong picture to the world.

We, Sri Lankans representing all communities are today living in peace. We do not fear leaving our homes because of LTTE. We know how we all suffered under LTTE. We also know LTTE chose its fate. It was LTTE who chose to take up arms and when a party takes up arms and refuses to lay down their arms, they have chosen their fate. LTTE were no angels. Therefore, UN/IC cannot treat them as such. The national army cannot be put into the same level as a terrorist organization or compared at the same level. The National Armed Forces are tasked to defend the nation and its people. This is what the Sri Lankan Forces did and did magnificently.

We, have watched for 12 years the lies and propaganda against our nation and our national armed forces.

We, have watched for 12 years bogus allegations without any evidence.

We have watched for 12 years repeated slander giving a handful of questionable data and completely brandishing an entire army as war criminals. This is unacceptable and we refuse to accept our armed forces did such crimes intentionally.

Has UN/IC or UNHRC being inside a war zone to be quoting from war books and expecting the soldiers only to be reading and following the book while LTTE cares not for any book & would have silenced all the soldiers reading the book in the theatre of war!

We have had enough with these lies.

We want the world to listen to the version of our armed forces!

We do not wish to see any more dramatic resolutions just to please lobby groups.

This drama must end.

Let us move on with our lives.

We are ready to allow even the LTTE combatants to move on with their lives so long as they do not take up arms but we want the LTTE fronts continuing the illegal international criminal network to be investigated and actions taken against them and action taken against any entity trying to separate Sri Lanka.

We, the citizens of Sri Lanka