Sri Lanka: The case for Neutrality 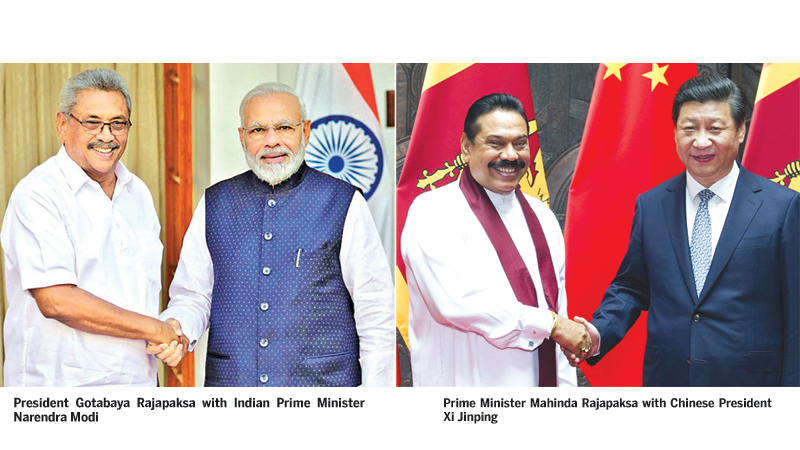 Sri Lanka has been playing the non-aligned card in its diplomacy for a while, but with increasing pressure from China, India, and the U.S. in the fields of foreign investment and security cooperation, some analysts have suggested that the small island nation of 22 million will have to choose sides soon. Meanwhile, President Gotabaya Rajapaksa has been stepping up his rhetoric about “Sri Lankan neutrality,” which is different from non-alignment and a new foreign policy concept for the country. In September 2020, at the United Nations General Assembly, he strongly emphasized that “Sri Lanka is committed to follow a neutral foreign policy with no affiliations to any particular country or power bloc…”

In fact, talk of neutrality has become a staple on President Rajapaksa’s agenda. In another typical instance late last year, he told a group of foreign diplomats that since “Sri Lanka is located in a place of strategic importance […] our country is attracted to many parties. In this context, Sri Lanka has chosen neutrality as its foreign policy […]”At the same time, President Rajapaksa has been visibly anxious to dispel accusations about a China-friendly foreign policy. Sri Lanka’s dependence on Chinese investment has already led to several policy blunders, most famously China’s (partial) control over two Sri Lankan ports, which the President insisted “was only a commercial transaction between our two countries.” While “some described this as a manifestation of a pro-China policy […] Sri Lanka is a friend of all countries,” according to President Rajapaksa.

However, in terms of political manoeuvring, he has leveraged neutrality-talk mainly against U.S. demands for Sri Lanka to curb its dependency on China. On this front, the United States achieved little under the previous coalition government in Colombo, in which even the West-leaning Prime Minister Ranil Wickremesinghe was aiming for a balanced relationship at best. And the current government under President Gotabaya Rajapaksa has turned Washington’s advances down even more firmly, stating neutrality as a reason. That happened again prominently last October, after a visit of then-Secretary of State Mike Pompeo, during which he called the Chinese Communist Party (CCP) “a predator.” President Rajapaksa reacted to this in a tweet, writing that “Sri Lanka will always maintain a neutral stand in foreign policy and will not get entangled in struggles between power blocs.” Chinese media were visibly pleased with this show of support.

Also domestically, President Rajapaksa has used references to neutrality to reject foreign meddling in internal affairs, especially against human rights accusations about the civil war in which he, as a former military officer, was actively involved. Naturally, the question arises if President Rajapaksa’s love for neutrality amounts to mere lip service or if this rhetoric is the beginning of a foreign policy that might last.

There are signs to suggest both. Sri Lanka has a long history of neutrality, which used to be a base-line foreign policy. That helped the country to regain control over two military bases in 1957 and terminate a security agreement with Great Britain, which used to tie the island’s military fate to the former colonizer. The decoupling allowed Sri Lanka to scale back perceived West-leaning tendencies and, in 1961, to become a founding member of the Non-Aligned Movement (NAM).

For a long time, Colombo maintained a strong affinity to the NAM, hosting its fifth summit in 1975, and holding the chairmanship from 1976–1979. The movement provided a platform for Sri Lanka to engage in multilateral diplomacy among the newly decolonized world and within the United Nations, too. During the 1960s and ’70s, Sri Lanka’s main concern was the development of its sovereignty, economy, and independence while staying clear of great power disputes.

Today, Sri Lankans still speak and think fondly of non-alignment. Rathindra Kuruwita recently noted that there “is a widespread belief among Sri Lankan policy wonks that the country’s non-aligned foreign policy allowed the country to navigate the Cold War relatively unscathed, and that this can be again replicated through proper policy initiatives.” Therefore, the nascent re-adjustment toward neutrality could be interpreted as a natural next step in this history and as a tool to push back against U.S., Chinese, and Indian demands for stakes in Sri Lanka’s domestic affairs.

However, the conceptual shift away from non-alignment toward neutrality is not just a difference in jargon. President Rajapaksa’s neutrality talk has not so much complemented but replaced altogether references to non-alignment. The two concepts, although similar, have vastly different implications. Rhetorical manoeuvring between them often indicates underlying foreign policy shifts, as the opposite cases of Sweden and Finland show — both dropped references to neutrality to signal readiness for closer collaboration with NATO.

The most noticeable difference between neutrality and non-alignment is that the former is a well-defined status under international law, with several hundred years of precedents in the realms of trade, military affairs, and humanitarianism. Non-alignment, on the other hand, is a purely political concept, which lost some relevancy due to the end of the Cold War and the fact that de-colonization — one of the NAM’s core topics — is less and less an issue 70 years after most former colonies gained their independence. That is another reason why President Rajapaksa does not need to worry much domestically when he alludes to neutrality, which is a typical European concept of great power balancing.

It is worth noting that neutrality has strong military connotations, as international law under the Hague Conventions (of 1899 and 1907) forbids neutrals from aiding any party in a shooting war. That includes the prohibition to lend neutral territory to belligerents. While this might look like going against Chinese interests in Sri Lankan ports, there are no indications in Chinese media or state publications that the CCP interprets this as a problem.

Sri Lanka’s shift toward full neutrality also has a local component, although that, too, is connected to the influence of external actors. President Rajapaksa, who came to power in 2019, is the brother of the former President and current Prime Minister Mahinda Rajapaksa, under whose presidency Sri Lanka’s debt to China first spiraled out of control. The subsequent lease agreements that were struck to clear the debt included an infamous deal for one terminal at Sri Lanka’s main port in Colombo, which handed full sovereignty over the facility to China. In 2014, Beijing took strategic advantage of the terminal by having a submarine dock there on the very day when Japan’s then-Prime Minister Abe Shinzo visited Sri Lanka.

The affair was one of several embarrassments about the port that had political consequences for the older Rajapaksa. In 2015, he lost the presidency and his party suffered at the polls. However, even his successors could not undo the damage. Sri Lanka was forced to hand over also a second port (in Hambantota) including 15,000 acres — albeit this time with explicit guarantees that it could not be used for military purposes.

Recently, President Rajapaksa has shown signs that he does not want to repeat past mistakes and hopes to counteract one-sided Chinese programmes by diversifying Sri Lanka’s investor portfolio, especially through Indian participation in infrastructure projects. The government’s 2019 decision for a deep-sea terminal at Colombo Port (right next to the Chinese-owned terminal) operated by India and Japan has widely been seen as part of this rebalancing strategy. However, such projects have themselves been subject to political fallouts and zigzagging. After intense local protests, the government decided that it would abandon the project in favour of a fully nationally owned terminal, which angered both potential partners. But, on March 2, President Rajapaksa’s government once again reversed course, announcing that the West Container Terminal (WCT) would, after all, be offered for investment to India and Japan, allowing them to hold 85 percent of stakes — the same rate that China has on its terminal next door.

The episode shows the delicate connection between domestic affinities and foreign relations. Alleged Indian attempts at meddling in Sri Lankan internal and foreign policy have been a constant source of public anxiety and frustration. At the same time, China will not be safe from local unease either. The public has shown increasing distrust and worries about the opaque and unaccountable nature of China’s “easy money.” Worries about failing mega-projects, the increasing number of Chinese labourers in the country, and growing debt rate have led to protests against the pro-Chinese government, too.

With these experiences, it comes as no surprise that the Rajapaksa brothers have become more cautious. Already during the election campaign, in 2019, Gotabaya Rajapaksa showed a strong preference for full neutrality, which became part of his inaugural address. To his local audience, he promised that “Sri Lanka will remain neutral in the global arena and will not intervene in any conflicts.”

Importantly, the past experiences also led to something of a national consensus. Neither President Rajapaksa’s internal rivals nor the main opposition party, the SJB, have voiced disapproval over his neutrality course — although Wickremesinghe has not picked up the same language. Moreover, also in the Foreign Office, Sri Lanka’s top diplomats are beginning to frame their country’s foreign policy as one of equidistance from great powers. In February 2021, Foreign Secretary Admiral Jayanath Colombage told India’s prominent English language daily, The Hindu, that Sri Lanka would “maintain neutrality” in “the major power game” and that friendly relations for economic purposes with all countries, “will determine our foreign policy.”

The Case for “Full Neutrality”

All in all, full neutrality is a relatively new concept in Sri Lanka’s foreign policy discourse, and it is connected to the political development of the Rajapaksa family. However, despite good reasons to doubt the sincerity of the approach, the current neutrality talk is not only a one-sided affair. It also gives the government the possibility to fence off encroachments from all sides, including China. In particular, worries about territorial sovereignty over ports make a neutrality policy a viable and sensible option.

Neutrality has always been a policy tool that created diplomatic wiggle-room for countries that did not see their future in the tight embrace of one or the other regional or global power. For domestic and international reasons, following a neutrality policy makes sense to Colombo and will probably also make sense to future governments. The more pressure foreign actors put on Sri Lanka, the stronger the case for a true neutrality policy will become domestically. What that policy will be — for instance, an armed, legally-based, and permanent neutrality, akin to those of Switzerland or Austria, or rather a political commitment like those of Mongolia or Serbia — remains to be seen. On which pillars it will stand, and whether or not that will include closer ties again to the NAM, is certainly up for debate.