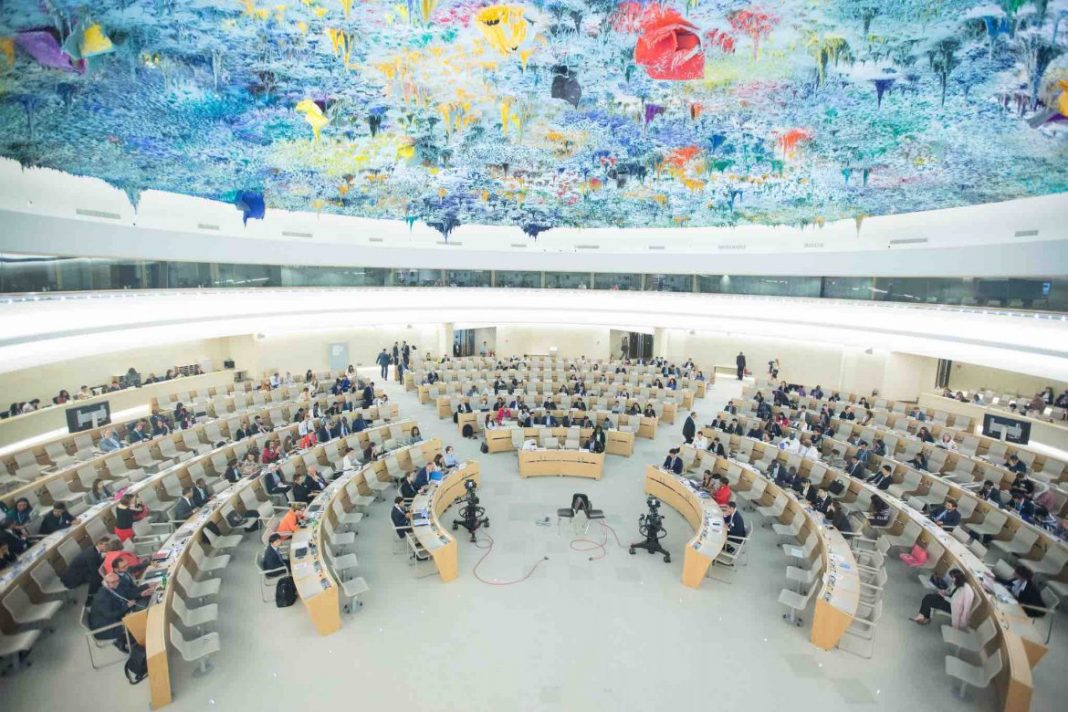 Cuba is one of the most admired countries in the Global South. Cuba stood up for Sri Lanka at UNHRC, with a speech calling for defiance and resistance. These are the hallmark attributes of Cuba which have won global admiration.

Likewise, China, Pakistan, Venezuela, Philippines, Bolivia and altogether eleven countries backed Sri Lanka resolutely. Our sincere gratitude is due to all of them.

The speeches of the Delegates from Pakistan, Venezuela and the Philippines were masterly orations. It was a treat to listen to them. Great analysis and eloquence.

The delegate from.Sri Lanka, Mr. C.A. Chandraprema, the veteran Columnist, read out a well prepared draft speech exposing the hypocrisy and the double standards of the proponents of the Resolution. The so-called ‘ Core Group’ of nations. ‘Which country would be most concerned about the welfare of its own people than the country itself?’ he asked.

He echoed the defiance and never say die spirit of Sri Lanka. If we are to die then let us die fighting for the principles we believe in and not capitulate in abject surrender. We have done no wrong to any soul to feel any remorse or guilt, was Sri Lanka’s stance.

In hindsight, the wisdom of a Counter Resolution from Sri Lanka as suggested by International law specialist Mr. D. Laksiri Mendis, in a recent article published in a local newspaper, looms large. Sri Lanka’s version of the chronology of events set out in a recital of the draft Counter Resolution would have then entered the records of the UNHRC proceedings. It is an option worth considering in future sessions of the UNHRC.

These speeches deserve to be played back over and over again on local TV and Radio Channels. Law students, in particular students of International law must be exposed to the reasoning and exposition inherent in the brief speeches.

Sri Lanka on the right side of history

Sri Lanka is on the right side of history. With China as an ally and support of the rest of Asia ( bar one – South Korea) which did not vote in favour of the Resolution against Sri Lanka, the signs are clear of the Global Split. Between the rapacious Colonial countries of the Global North and ex – colonies of the Global South.

Sri Lanka must be congratulated for requesting a Vote. We showed that we are not prepared to bow our heads down to Western Imperialism deceitfully masquerading as paragons of Human Rights.

In Nuremberg and Tokyo Trials what prevailed was Victor’s Justice. For the first time in history the only country which defeated brutal terrorism ( LTTE – that is responsible for killing thousands of innocent Tamils, and the Prime Minister of India, Rajiv Gandhi) is being subject to the Justice of the Defeated.

This is a retrogression or must be treated as an Aberration.

It is like hauling the Allied Commanders and political leaders of USA, Soviet Union, Great Britain, France before an International War Crimes Tribunal for Crimes against

Humanity, Genocide and Mass Murder of civilians after the end of the second world war. Using the evidence of bombing of Dresden, Tokyo, Atomic bombs over Hiroshima and Nagasaki. And the Rape of countless  German women by Russian, American and British troops of the Allies, as the basis of the criminal charges.

How would the world respond to such a drama?

Double standards of the UNHRC

This is exactly what confronts Sri Lanka. The Punishment for defeating the evil of terrorism.

In the Report of the UN High Commissioner for Human Rights there is hardly any mention of the serial killing and mass murder of innocent civilians committed by the LTTE. No condemnation. A document that is more appropriate to the proceedings of a ‘ Kangaroo Court’ than the hallowed precincts of a UN related international institution.

UNHRC is now engaged in a shameless and morally indefensible exercise of white washing the LTTE and giving the status of Martyrdom to Prabhakar an. How would India respond if the UN system  recognized Godse, who killed Mahatma Gandhi, as a Martyr? The LTTE is no different. Its hands are stained with the blood of Rajiv Gandhi and over 1500 lives of IPKF soldiers. Yet the Foreign Minister of India, Jayshankar ( a Tamil from Tamilnadu) is totally indifferent to the sentiments of millions of Indians who have not forgotten the crimes of the LTTE perpetrated against Indians both on the soil of India as well as Sri Lanka.

Jayshankar wants India’s foreign policy to be forged by looking at Sri Lanka through the lens of Tamilnadu. This is suicidal for India. Tamilnadu is no longer an  exclusive Hindu state. Like the LTTE it pushes the Agenda of the Global Church.

India will rue the day if a Dravidastan is formed. It will lead to the break up of India. By supporting Tamil aspirations for a Tamil Eelam, India is committing hara kiri.

India no longer can claim leadership of South Asia. It failed to give support to a fellow South Asian country i.e. Sri Lanka, when three others namely Pakistan, Bangladesh, and Maldives ( all three Muslim countries)  showed South Asian solidarity and voted against the Resolution.

India is pushing all it’s regional neighbours to the warm embrace of China.

Asia needs countries that  have a spine to lead this huge continent and stand up against the colonial West. The Historical  Adversary.

The East is East and the West is West. India is geographically in the East. Why did it not give voice to the concerns of Sri Lanka and join China, Pakistan, Philippines, Venezuela, Russia, Cuba, Bolivia?

Why did India join the UK and USA and forget the history of humiliation and plunder under the British occupation ? The natural allies of India lie in Asia and not in the West. How can India forget this reality?

We must take refuge in a value system that is non – negotiable. The grundnorm of our civilization and our links to each other.

Unlike in a western country where almost everything is for sale and values have significance only when they generate profit. It is not so in the East.

The image of India as a lackey of the West is causing enormous harm to India both within and outside India. Thanks to Jayshankar’s tribal driven agenda of foreign policy making for India.

Posterity will never be kind to Indian Prime Minister Mody for having allowed a Tamilian (Jayshankar) to destroy India’ s millennial old links with Sri Lanka through a flawed foreign policy.

Tomorrow belongs to China, not India

Pakistan, Bangladesh, Maldives and the rest of South Asia know that. The pattern of voting at UNHRC showed that clearly.

Defiance should be the hallmark of Sri Lanka’s response to bullying tactics by Western colonial countries, both now and in the future. UN is a tool of Western Colonialism.

Sri Lanka can win the admiration of the entire world and put the current leadership of India to shame for showing spine when needed. Asia’s destiny is not subservience to the West.

There was no greater embodiment of spine and moral courage than the great Netaji Subash Chandra Bose. Why is India failing him now?

Sri Lanka can become the Cuba of Asia to the accompaniment of unceasing applause of Asia’s teeming millions yearning for moral leadership with backbone.