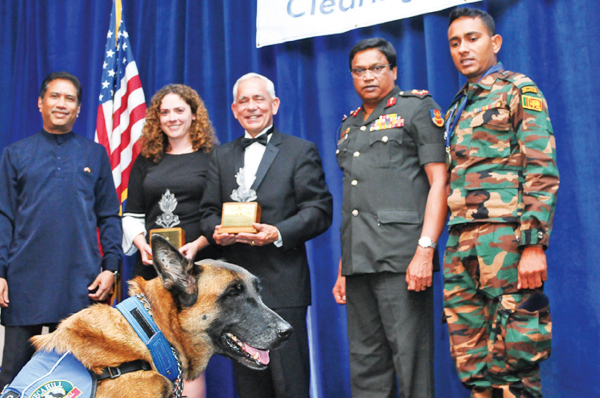 Our beautiful country has steadily recovered from the long conflict of three decades. The nation is on its determined journey towards restoration and reconciliation. The sound of gunfire and exploding shells have ceased since 2009. But many people have not fully understood the massive humanitarian demining operation undertaken by the Sri Lanka Army over the past 11 years. It has been a silent service, performed amidst difficult terrain.

The battles were won, yet thousands of mines, UXOs (unexploded ordnance) and ERWs (explosive remnants of war) had dotted areas in the Northern and Eastern Provinces. With systematic assessment and

coordination, working alongside the National Mine Action Centre (NMAC), the Sri Lanka Army Humanitarian Demining Unit (SLA-HDU) has done a tremendous task of clearing concealed mines. There are two foreign INGOs and two local NGOs who are engaged in mine clearing operations at present. The SLA-HDU operates under the guidance and direction of incumbent Army Commander General Shavendra Silva, along with the Chief Field Engineer Major General A.N. Amarasekera. The Field Engineer Brigade is headed by Brigadier Pradeep Gunawardene as Programme Manager for demining operations.

Concealed mines are the ugly scars of old battlefields. They pose a risk to anyone who might reside in nearby areas, which is why the Sri Lanka Army has put in thousands of hours and manpower to detect and destroy these mines. Mines come in different sizes with varying blast radius that can cause the loss of limbs, serious physical injury and death. The mine clearing crews have successfully discovered anti-personnel mines, anti-tank mines, IEDs (improvised explosive devices) and UXOs (unexploded ordnance that include grenades and mortars that can be wedged between trees or rocks). The worst threat comes from ‘cluster mines’, where mines are connected by detonation cords that explode in rapid succession causing multiple casualties. During the monsoon some mines get washed towards river banks or playing fields, and pose a threat to civilians, especially children who might pick them up.

Clearing mines is a very dangerous task. Over the years the Corps of Engineers has trained and produced around 300 skilled expert soldiers, known as ‘sappers’ who tackle danger every single day. The men are assisted by modern machines and MDDs (mine detection dogs). An officer working in the minefields Captain Rajitha Ambalampitiya explained, “Once we are informed of an area suspected to be contaminated with mines, we coordinate with the NMAC Regional Office. We submit a file to the relevant GA with all details. We first carry out a NTS (non-technical survey). In this process, we check our records to see if the area was the scene of a battle and do a field visit. If we realize there is some evidence of mines we verify by doing a technical survey during which process we use our remote-controlled machines like the MV-4 and Bozena, our trained mine detection dogs and soldiers. Our primary task is to see the density of mines and confirm hazard areas.”

One the Army-HDU knows the mine density, the area is classified as High Risk, Medium Risk or Low Risk. The armour-plated MV-4 flail machine goes across the fields and its movement explodes some of the mines, but all is not yet safe. The work of the sappers is then planned and they approach with caution. Captain Ambalampitiya added, “A working group consists of one officer (lieutenant or captain) with a senior non-commissioned officer (NCO) and 40 soldiers. All soldiers doing mine clearance wear a protective suit with helmet (including visor). The first action is to create a ‘safe lane’ – a path within the minefield where a casualty can be moved immediately in case of a blast. Soldiers often work in the kneeling position. It is hard work. They keep a working distance of 25 metres between each other. Every 30 minutes we safely rotate them, giving them a short break. Rainy weather hinders our work as mines can suddenly begin to float in the stagnant water. In the Anuradhapura area, we have encountered wild elephants and bears who disturb us. In many other areas we have come across poisonous snakes.”

When it’s a High Risk zone, the soldiers have to crawl on their knees and slowly clear patches of sand. Each minute is filled with tension and danger. Mines are slowly discovered with steady hands. Working in the heat of the Northern and Eastern Provinces wearing the PPE kit is not a comfortable task. If the area is identified as containing ERW (explosive remnants of war) then a Battle Area Clearance (BAC) is done. In this technique, about 15 sappers form an extended line and probe the soil at a 45-degree angle to the ground. At times, soldiers use the F-3 Minelab metal detector. At every clearing area, in compliance with international standards, an ambulance and trained medics from the Corps of Engineers remain on standby.

The MDDs – mine detection dogs – are a vital part of the 300-man team. At present, there are 22 dogs (nine undergoing training and five retired). The trained detection dogs are received from kind foreign donors. A batch of nine puppies has been bred from these dogs. They undergo basic obedience training and advanced mine detection training at the Engineer Brigade based in Boo- Oya, Vavuniya. After six months of training, the dog and its Army handler are subject to an accreditation test by the NMAC. Once they are found to be of the desired standard, they are deployed. Some of these dogs have performed with distinction and made hundreds of mine detections. Their efforts were duly recognized by the US-based Marshall Legacy Institute. The Sri Lankan mine detection dogs got the award for the World’s Best Mine Detection Team. Operating from Arlington (Virginia) the Marshall Legacy Institute works around the globe in demining and has assisted Sri Lanka twice by gifting mine detection dogs. Among these dogs are Sammy, Alvin, Ciro and Zeera who brought fame to Sri Lanka on international platforms.

It is estimated by the National Mine Action Centre (NMAC) that since 2002 Sri Lanka had a mine contaminated area covering (approximately) 1316.2 square kilometres. After 11 years of consistent service, the Army Humanitarian Demining Unit has cleared a massive area of 886.08 square kilometres. Of the area allocated to the Army, they have only another 2.56 square kilometres left (as of January 25, 2021), which is a notable achievement obtained with sweat, hard work and altruism. It must be highlighted that when the world-famous Madhu Shrine was to be reopened it was the Army-HDU teams that first cleared mines and secured the area for restoration. The forested area had been heavily mined by the enemy. The Church draws around 300,000 Catholics for the annual feast. The SLA-HDU also cleared mines along the Northern railway line and Kilinochchi campus. In 2009, the teams cleared 72 villages in Batticaloa within six months and resettled 3849 IDP (internally displaced persons).

Demining doesn’t stop when mines are cleared. All recovered mines are collected daily and taken to secure sites where EOD (explosive ordnance disposal) teams from the Sri Lanka Army blast the mines. By blasting the recovered anti-personal mines the Army deters them from being stolen by people who had developed a habit of using the substances taken from mines to expedite their fishing activity. These civilians make a rudimentary explosive and throw it into lakes and rivers to stun fish. A single mine in criminal hands can create other problems for police.

Demining is a process that enriches the resettlement and reintegration of communities. I have seen many areas which were once deadly minefields now transformed in fields of lush paddy or vegetable farms by Tamil-speaking Sri Lankans. Thus demining operations have helped many farmers to earn an income and educate their children. A total of 12,883 families have been able to resettle after mine clearing operations by the Army. Some parts of the well-travelled A-9 highway had sections cleared for dangerous mines years ago. At present, the NMAC is revising the National Mine Action Strategy to terminate overall demining operations within the next three years.

Humanitarian demining operations have five pillars – demining, MRE (mine risk education), victim assistance, advocacy and stockpile destruction. MRE is another vital role undertaken by the Army. Officers and soldiers have visited many villages and taught civilians how to respond if they spotted a suspected anti-personnel mine. Civilians have also supported the process by informing local police and the Army about such locations. The work of the HDU has been assisted by USA and Australia along with some EU countries, for which the Corps of Engineers is thankful. As a responsible nation, Sri Lanka has remained committed to clear mines. The Army has cleared mines to protect all Sri Lankans. The work of the Army Humanitarian Demining Unit has enriched the nation’s quest for reconciliation and prosperity.