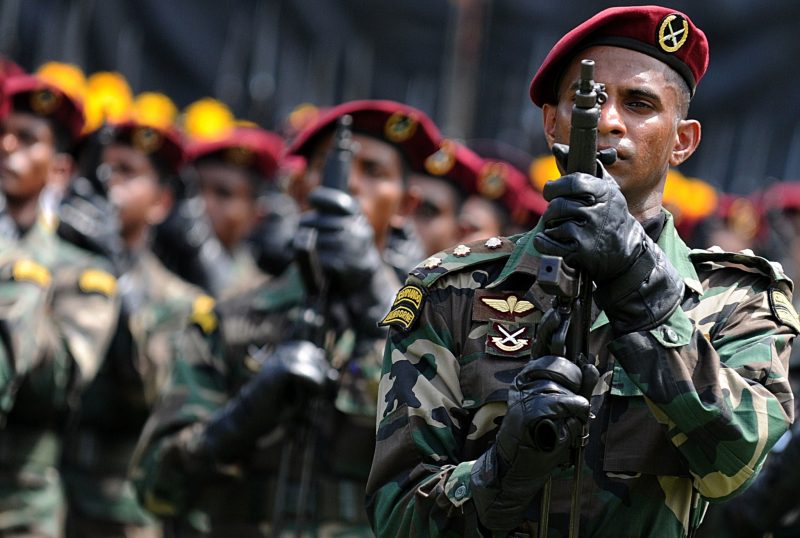 The Sri Lanka Army (SLA) which has served the nation with dedication for over seven decades enters a new year. Over these past seven decades, the Army has consistently transformed itself to become a fully-fledged capacity-based fighting force infused with state-of-the-art combat technology.

In addition, the Army has made a massive contribution in humanitarian and disaster relief operations. The nation owes its deep gratitude to the Army for its dynamic role in containing the spread of COVID-19, alongside the Government medical authorities. The Army played a significant role in the vaccination drive in the battle against Covid-19. The officers and soldiers have also assisted in many nation-building endeavours.

The history of our great nation is filled with episodes of invasions, battles and insurgencies. A few of our valiant kings who excelled in combat leadership were King Dutugemunu, King Gajabahu, King Dhatusena and King Vijayabahu. Historical records indicate how the legendary ruler, King Parakramabahu I mounted a major military seaborne offensive against Myanmar, using a division of elephant mounted troops. These ancient forces relied on cavalry and skilled archers.

The Portuguese, Dutch and the British forcibly landed here with their naval fleets and managed to gain the upper hand by the use of cannon fire, and gradually captured our maritime provinces through cunning treaties, espionage and broken promises. However, the Portuguese, Dutch and the British faced stiff resistance, as our ancient troops counter attacked inflicting heavy casualties on the invading forces, in many battles across the island.

Chroniclers describe the ambush tactics of Ceylon’s ancient fighters who displayed their field craft and combat strategies. The Dutch later fortified their coastal defences by erecting forts in Colombo, Matara, Jaffna, Galle, Trincomalee, Negombo and Batticaloa. Later, the British established a military garrison in Trincomalee with a naval fleet taking advantage of the natural harbour.

In 1802, a rifle regiment, the First Ceylon Regiment, was formed with Ceylonese, African and Malay soldiers. In 1861, the colony of Ceylon was empowered with her first Volunteer Corps. This formation was referred to as the Ceylon Light Infantry Volunteers. Slowly but steadily, the Army enriched its troop capacity to raise units such as the Ceylon Garrison Artillery, Mounted Infantry, Medical Corps, Engineer Corps and Supply and Transport Corps.

In 1910, the force was subject to effective combat readiness and renamed the Ceylon Defence Force. The men were deployed for active duty in England. With the advent of the Second World War, the Ceylon Defence Force raised some new units including the Military Police Corps, Signal Corps and Colombo Town Guard. These pioneer officers and soldiers laid the foundation of a rich military tradition on which their regiments grew in size and capacity.

In 1949, the Army Act was passed in Parliament establishing the Ceylon Army. A regular force was formed on October 10, 1949, under the command of Brigadier Roderick Sinclair. In 1950, the first batch of Ceylonese cadets was sent for training to the Royal Military Academy Sandhurst, England. After realizing the importance of a facility and syllabus to train future officer cadets locally, the Sri Lanka Army set up its own training school in the salubrious hills of Diyatalawa. The Sri Lanka Military Academy (SLMA) has blossomed into a degree-awarding institution and has proudly produced many Generals since then.

Brigadier Anton Muthukumaru became the first Sri Lankan Commander of the Army. He was a dynamic visionary who initiated the establishment of the Army cantonment in Panagoda, which houses many regiments today. The Women’s Corps was formed in 1979. Since its formation, the Women’s Corps has made a significant contribution to the Army with female officers serving in many professional roles as doctors, engineers, lawyers and accountants.

During the early 1970s and mid-1980s, Sri Lanka was subject to home-grown insurgencies and domestic terrorism, which compelled the Army to establish area headquarters. Today, there are seven Security Force Headquarters for smooth command and administrative purposes.

The threat of growing subversive activity demanded the formation of specialized fighting units within the Army. Hence, the first commando course was conducted in February 1978, and the commando squadron was formed in 1980. The Commando Regiment made a significant contribution during the war. In the recent past, they have upgraded their combat kennels with many dog breeds selected and trained for various tasks. Within this spectrum, they have formed the first Cadaver Search Unit, using the Beagle breed of dog. The kennels are located in Ganemulla. These intelligent dogs are capable of sniffing and locating human bodies buried in mud or the slippery banks of a river. Sri Lanka is the first South East Asian nation to have this military capability.

During the prolonged 30-year conflict, the Army adopted and adjusted to various levels of threats incorporating technology and enhanced training. The Special Forces (SF) Regiment is another vital component of the military strike capability. These strategic combatants have rendered a great service infiltrating and fighting behind enemy lines.

Hundreds of officers and soldiers laid down their lives in the line of duty. Many young men remain disabled and dependent for life. Against this backdrop of sacrifice, it is of paramount importance that all politicians and stakeholders in governance sustain this hard-won peace and work towards embracing our diversity whereby we create a bountiful nation for all Sri Lankans.

In this era of sustained peace, the Army, under the leadership of its present Commander, General Shavendra Silva is taking the dimension of a capacity-based force, with emphasis on nation-building. In the recent past when the country was afflicted by natural disasters, it was the soldiers who actively engaged in rescue operations as first responders. Whether it was the relentless rains which unleashed floods and landslides or a collapsed high rise building, the Sri Lankan soldier was again willing to display his spirit of altruism. It was the Army soldier who reached out with assurance and friendship to people who were in need of rescue.

Security Force Headquarters Jaffna (SFJ) is an important and sensitive military command. Over the past decade, in the Northern Province, the Sri Lanka Army has played a pivotal role in helping the public in many areas. This is a genuine effort of reaching out and changing lives. The silent contributions made by the Army include humanitarian de-mining operations, facilitating the return of people to their ancestral lands, repairing schools, hospitals and places of religious worship, organizing sports events for youth, providing books and computers to selected schools and celebrating local religious festivals with communities.

In the area of regional security and inter-operability of the Forces, the Army has conducted the Colombo Defence Seminar, with the participation of many foreign military analysts and commanders, where current security issues were deliberated. The theatre of future battles in any nation will be swift and digitally dominated. In keeping our Forces primed and ready, the annual field training exercise ‘Cormorant Strike’ has been successfully conducted in the Eastern Province using members of the Commando and Special Forces along with the Sri Lanka Air Force and the Sri Lanka Navy over the past few years. The Sri Lanka Army has confronted trials and triumphs. They will continue to play an important role as defenders of our nation. The Army remains with us, for us, forever.