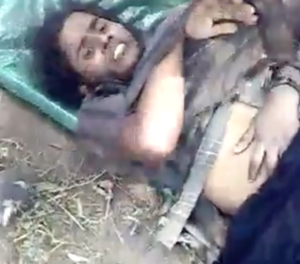 Spare a few minutes to see the inhumanity of Sri Lanka’s Armed Forces.

This video depicts the cruel nature of the Sri Lankan Armed Forces. Capturing an injured LTTE female combatant, look at the manner they are dressing her wounds and the despicable manner they are changing her clothes. What inhumanity the Sri Lankan troops are showing by giving her water with glucose. What dangers the Army are putting her in with mortars being fired with possibility of landing where the troops were positioned. This is what gets promoted by LTTE and LTTE fronts and parroted by foreign MPs and UN officials. The real scenario that took place days before the end of the LTTE was far different.

Bhavani the LTTE combatant was injured in both hand and legs.

There were no other LTTE – they probably had abandoned her or found her an hindrance to carry as they fled the Sri Lankan troops closing in on LTTE.

From her hair, it was obvious she had not bathed in months.

She was thirsty and begging for water.

She was injured and bloodied.

The soldiers didn’t have scissors and used a knife to cut open her uniform revealing her wounded hand. A bandage was immediately put.

Her legs were quickly covered with a piece of cloth and the soldiers went to the extent of dressing her with a sarong (an item worn by males) LTTE versions would have relayed that she was gang raped by these soldiers.

Her leg wound was also dressed and all the while the soldiers were heard voicing fear of mortars landing.

Her request for water was provided with the soldiers going to the extent of adding glucose to give her energy.

She was thereafter placed on a makeshift stretcher and carried by the soldiers.

This was just one small incident of many that even the ICRC and foreign journalists had to also say about our soldiers – sharing their meal packet, sacrificing their own food having not eaten for hours themselves, carrying the injured when they were themselves tired from walking miles. None of the good that the Sri Lankan Armed Forces did get relayed. It is taboo to say anything good about our soldiers. Its fashionably correct to say everything bad about them.

But, the compassionate nature of our soldiers is something we all know. They have gone the extra mile in many other instances. They have even put their life on the line to save us.

These stories make us the patriotic citizens of Sri Lanka stand in unison against the distortions and fabrications being made against them.

We do not doubt there may have been one or two bad eggs amongst them but that is not to paint the entire armed forces as war criminals.

It is disgusting too that some of these very soldiers even soldier commentators have sold their own colleagues for greener pastures and green cards, agreeing to tell lies and manipulate video clippings against the very men they ate and fought battles together with. They will one day face their ugly karma for this treachery, deserting and deceiving their own just to live in a Western country. May they feel ashamed of what they have done.

When seeing the humanity of our armed forces in this video, it brings tears to our eyes to know what a compassionate and humane armed force we have and we are damn proud of them and we will forever defend them and their right to a special place in military history as being the world’s ONLY Armed Force to carry out a military intervention against an internationally banned terrorist movement while simultaneously carrying out an humanitarian rescue operation while the world was ganging up on the political leadership to diplomatically pressure them to stop the onslaught and allow the tigers another day to terrorize us.

We are proud of our Armed Forces

We will forever defend our Armed Forces.