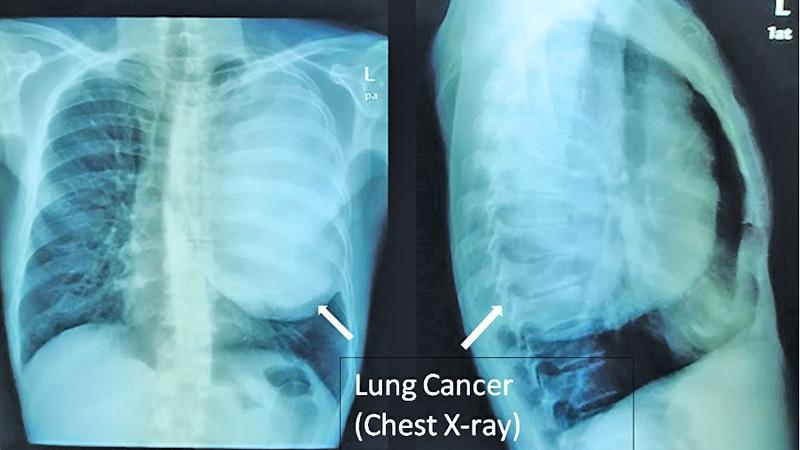 Q: Reports of a surge in lung cancer in Sri Lanka have raised alarm bells among health officials currently battling to reduce cancer incidence in the country amid the challenges posed by the Covid 19 pandemic. As many of our readers still don’t know what lung cancer is, could you explain what it is in simple layman language?

A: Cancer is the uncontrolled growth of abnormal cells in the body. Lung cancer is a type of cancer that begins in the lungs. Lung cancers can grow fast and may invade the surrounding structures in the chest cavity. It may invade the blood vessels and the patient could present with coughing up blood. When breathing tubes are blocked, and a lot of lung tissues are affected, patients will become breathless.

Lung cancer spreading into the chest cavity is another cause of difficulty in breathing due to collection of fluid within the chest cavity. The cancer cells can spread through the bloodstream into distant places such as the brain and may start growing there. This is known as metastasis. Some cancers can produce various chemical substances which may give rise to different symptoms such as loss of weight, confusion, unsteady gait.

Q: It has been said that Lung cancer is the most common cancer in many countries. Gender wise, it is also said to be the second commonest male cancer in Sri Lanka. Is this correct ? If so, why?

Q: In 2014 according to the Cancer Registry there were 1,316 new lung cancer patients reported in Sri Lanka, of whom 1,032 were male patients. Do you have an update on these figures? Or are the numbers the same today? When was the last national survey done on lung cancer?

Q: What are the main risk factors that cause lung cancer among Lankans today as compared to a decade ago? Is it correct that cigarette smoking is the leading cause due to the large number of unnatural ingredients they contain. Is this correct? What are the toxic elements that are chiefly responsible?

A: Cigarette smoking is the number one risk factor for lung cancer. Three main ingredients of cigarette smoke are Tar, Nicotine and Carbon monoxide. More than 4,000 chemical compounds are found in cigarette smoke and about seventy of them are known to cause cancers. These substances that cause cancer are known as carcinogens (PAH, N-nitrosamines, aromatic amines, 1,3-butadiene, benzene, aldehydes, and ethylene oxide are some of them). Cigarette smoking is rare in Sri Lankan females and so is lung cancer.

Q : Studies abroad have found that the risk of lung cancer for smokers is many times higher than for non smokers, depending on the duration and number of sticks/packets smoked per day. Do you agree?

A: Smoking is known to increase the risk of developing lung cancer by 25 times. The risk increases with the number of sticks/packets and also with duration of smoking. Patients diagnosed with lung cancer, if they continue to smoke, will have a poor outcome with decreased survival rates.

Q: What about cigar smokers and pipe smokers?

A: Smoking cigars or a pipe is also associated with an increased risk of lung cancer,

Q: Family history of lung cancer – how high is it on the risk list?

A: About 8% of lung cancers are caused by inherited (genetic) factors. The risk is doubled in relatives of people who are diagnosed with lung cancer.

Q: Second hand smoke- what is it and how can it cause lung cancer?

A: Passive smoking, the inhalation of smoke from another’s smoking is a well-known cause of lung cancer.

Q: Apart from the lungs, can smoking also affect other organs in our body? E.g. Can a pregnant mother who smokes harm her foetus as well as her own reproductive organs?

A: A Smoking can make it harder for a woman to become pregnant (sub-fertile). Preterm (early) delivery, stillbirth (death of the baby before delivery), low birth weight are known complications of smoking. Sudden infant death syndrome, ectopic pregnancy and orofacial clefts in infants are known to be associated with smoking during pregnancy. Smoking can also affect men’s sperm and can reduce fertility.

Smoking can cause cancer in most of the organs of the body (Bladder, kidney, liver, colon, oropharynx, stomach, pancreas. blood).

Smoking increases the risk for coronary heart disease and stroke by 2 to 4 times. It can lower the bone mass and make the bone vulnerable to osteoporosis and fracture. It can also increase your risk for cataracts (clouding of the eye’s lens). Smoking is a cause of type two diabetes mellitus and can make it harder to control. It can affect the immune system adversely and lower the body immunity.

A: The Covid 19 virus causes pneumonia and scarring of the lung in some patients. Since it is a new disease, no one knows whether it is going to be a cause for lung cancer. Lot of other viruses, such as HIV, Hepatitis B and C, Human papilloma virus, Epstein-Barr virus are known to cause cancers in the human body.

Q : Any other factors such as breathing polluted air due to the outdoor burning of some waste materials which release carcinogens eg: burning of polythene and plastics release chemicals including dioxin to the environment leading to cancer, exposure to other carcinogens in the air which could be indoor or outdoor such as diesel exhaust – can they collectively increase the risk of lung cancer?

Q: So what are the symptoms we need to look out for?

A: A cough that doesn’t go away, coughing up blood even if it is very small, chest pain, difficulty in breathing or change of voice are the common symptoms of lung cancer. Loss of weight and loss of appetite are common to any cancer. Patients can develop some other symptoms if the cancer has spread to other organs.

Q: Are there different stages of progression in lung cancer? What are the symptoms and signs to watch for in an advanced stage?

A: Lung cancer staging will be done considering the size of the cancer (Tumour – T), extent of lymph node involvement (N), and the distal metastasis (M). You may see this in the biopsy report as TNM staging. Patients with advanced cancer may develop other symptoms depending on the organs or distant sites involved. If the cancer has spread to the brain, they may complain of headache, weakness of limbs, or fits and if in the spine, the patient may present with backache, lower limb weakness and numbness and so on.

Q: What is the usual treatment procedure when a patient comes with suspicious symptoms of lung cancer to your clinic at Welisara ?

A: Following a detailed history and physical examination, basic investigations such as blood tests sputum analysis for Tuberculosis and chest X-ray will be carried out. Chest X-ray will be abnormal in the majority of patients.

CT scan of the chest will be arranged thereafter for further evaluation. Any patient with a suspected cancer will need a tissue confirmation (Biopsy) before specific treatment.

After assessing the chest X-ray and the CT scan, a procedure such as scan guided biopsy, bronchoscopy, thoracoscopy will be decided to obtain a tissue sample (biopsy). Bronchoscopy is a procedure where we pass a thin tube with a camera through the nose into breathing tubes under local anaesthesia and obtain samples. Thoracoscopy is done under local or general anaesthesia where again a small camera is introduced into the chest cavity to obtain biopsy samples.

Q. If the patient is in an advanced stage what are the chances of survival ?

A: In advanced lung cancer, the chances of survival may be in weeks or months. Five year survival for localised (Early stage) lung cancer is around 63 % and that for late stage (stage 4) is around 7 percent.

Q. Prevention has been cited as being a better option than treatment when it comes to non communicable diseases ( NCDs ) like cancer. What are the gaps you would wish to fill urgently in the case of persons who are vulnerable to lung cancer in this country both young and old ?

A: Educating the people on risks of smoking and how to keep our younger generation away from smoking is the most important thing.

Q Summaries a few Do’s and Don’ts the public could follow adhering to health Ministry guidelines.

A: Quitting smoking will reduce lung cancer in you and your family. Seek out smoke free hotels, restaurants, and bars and do not allow visitors to smoke in your home, workplace or car. Ask your friends and family members not to smoke around you and your children. Educate your children about second-hand smoke and how to avoid it.

Avoiding exposure to known cancer causing agents in the workplace and elsewhere, may also be helpful. A healthy diet with lots of fruits and vegetables may also help reduce your risk of lung cancer.