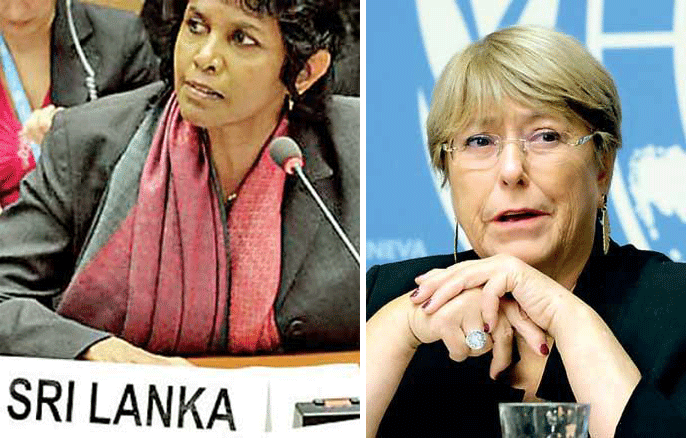 The R2P concept was coined, not by the United Nations, but by the 2001 International Commission of Intervention and State Sovereignty (ICISS), which was set up by the Government of Canada in 2001

Have Bachelet and the 5 ‘Core Group’ forgotten what President Bush said after the 9/11, terrorist attack? He said “Every nation, in every region, now has a decision to make. Either you are with us, or you are with the terrorists.”

The purpose of this article is to present the  expert views and advice so far published on how to preserve our sovereignty, when nations which describe themselves as a ‘core group’, comprising Canada, UK, Montenegro, North Macedonia and Germany, have proposed a resolution at the 43rd session of the UNHRC that threatens the very sovereignty of Sri Lanka.   This group proposes to violate Sri Lanka’s sovereignty, by changing the global rules, masquerading under the cover of ‘Human Rights’.  Their   proposed resolution, as reported, is based on the outrageous Report of the United Nations High Commissioner for Human Rights, Michelle Bachelet who has no clue of what happened in Sri Lanka and is relying on questionable ‘hearsay’ evidence.

The Government has the responsibility to tell the people in detail what they will do at the UNHRC. They must tell the people that Bachelet with the CORE GROUP are cutting the path to recolonise Sri Lanka, as acceptance of her report means, the international community will take appropriate collective action, taking away our independence, sovereignty and territorial integrity.

The Government must request a friendly Non-Aligned Movement [NAM] country member of the Human Rights Council, to call for a vote. If we do not, the draft resolution will be adopted by consensus without a vote.

This is the reality because this is the procedure practiced at the UNHRC. It is similar to seconding a motion. If the draft resolution is adopted, the  Sri Lankan Government will be implicitly accepting that it is  unable and unwilling to protect its population from war crimes,  genocide,  crimes against humanity and /ethnic cleansing.

By doing so, we will be admitting we are a failed state and therefore exposing the forces to be tried outside the country

Have Bachelet and the 5 ‘Core Group’ forgotten what President Bush said after the 9/11, terrorist attack? He said “Every nation, in every region, now has a decision to make. Either you are with us, or you are with
the terrorists.”

People of great character in Sri Lanka have stood-up to bullies before, and we shall do the same, this time too. Sir Ponnambalam Arunachalam spoke at a Sinhalese Conference in 1919 for the purpose of organizing ‘People’s Associations’ throughout the island. This was during the British colonial period when he said, “The people are deprived of all power and interest in the administration of their affairs; we are almost like cattle, driven at the pleasure of their official masters. People have been reduced to a state of helpless dependency.”  [‘Speeches and Writings of Sir Ponnambalam Arunachalam’ , my friend, a granddaughter of that great gentleman, gifted the  invaluable book. The time is right to get together to form a similar ‘People’s Associations’.

This article is based on the path shown by  great, present day patriots like Tamara Kunanayakam who was Permanent Representative of Sri Lanka to the UN in Geneva, Chairperson of the UN Working Group on the Right to Development leading intergovernmental negotiations, and a senior official at OHCHR,  Shenali Waduge that indomitable vanguard and heart of  Sri Lanka patriotism with her prolific writings and research  and the many committed members of the Sri  Lanka Study Circle and  other groups including Nidahas network, Professionals’ National Front (PNF),who, fed by the people, have kept alive the spark of a great Nation.

They all point out that colonisation in the 21st Century is mainly not with weapons,  but by hegemony where the minds of the people are bombarded with fake reports, false allegations and with the use of Human rights as a weapon.

The govt. looked into the legality of Bachelet Report?

Has the government looked into the legality of Bachelet Report with regard to its compatibility with the UN Charter and the 1970 General Assembly Declaration on Principles of International Law concerning Friendly Relations and Corporation among States, which is the authentic interpretation of the Charter? The patriots point out that Bachelet has shown utter contempt for the mandate given to her by the General Assembly within the framework of the Charter.  To understand the legality of the Bachelet Report, attention must be drawn to the doctrine known as the Responsibility to Protect [R2P].  The Bachelet report attempts to use the R2P to advance a vision of a unilateral world order to replace the multilateral order based on the UN Charter.

Birth of R2P people of other nations

The R2P concept was coined, not by the United Nations, but by the 2001 International Commission of Intervention and State Sovereignty (ICISS), which was set up by the Government of Canada in 2001.

The doctrine marked a poignant transformation of international understanding of ‘sovereignty’. In the words of the drafters, a country loses its sovereignty if it is proved to have committed four atrocious crimes: genocide, war crimes, crimes against humanity and ethnic cleansing.   Such was the case when UK and US simulated the language of the R2P doctrine to justify waging war in Iraq in 2003 under the guise of humanitarian grounds. Is this justifiable?

Tamara Kunanayagam repeatedly alerts the government to the R2P language sneaked into the Bachelet Report found in Para. 56 of R2P: that says…. “The Government has now demonstrated its inability and unwillingness to pursue a meaningful path towards accountability for international crimes and serious human rights violations.” It is this language that Bachelet uses to justify a call for preventive action and   application of unilateral coercive measures against Sri Lanka such as sanction  which are, incompatible with the UN Charter.’’

The Bachelet Report, by adopting the logic and language of R2P, attempts to set a precedent to undermine Charter based multilateralism and the sovereignty principle.  The Study Circle in its articles point out to the Government that if we concede and accept the outrageous report of the UNHRC,  we will  lose our sovereignty and we will   endanger other countries by allowing an illegal precedent to be set up much against the UN Charter, whereby  other nations will  also automatically lose their sovereignty.

The Foreign Minister at the 43rd UNHRC session rightly said that Sri Lanka rejects the resolution and seeks closure. If that is so, the only way forward   is to call for a vote through a friendly member state. It is on the basis of common interest that we must mobilize the countries of Non-Aligned Movement and the Global south to vote against the resolution. If we fail in this regard it can imperil the foreseeable future of many countries. It is therefore a grave responsibility cast on us, the Non-Aligned nations, by history to preserve our independence and sovereignty.

Sri Lanka today has a major role to play as before when NAM was founded to unite all the countries to strengthen the NAM to prevent a return to foreign occupation and domination.

The Sri Lanka study circle asks, ‘Why does Colombage barefacedly lie that the key to our Foreign Policy is ‘Neutrality’. What strength would we be able to garner, if we had the 120 countries of the NAM with us, on a common platform? Can we afford to alienate 120 out of the 193 countries, members of the United Nations, 34 out of the 47 members of the Human Rights Council? Can we afford to isolate ourselves and become prey to the ambitions of a hegemonic power?

Why does Colombage say that we will not surrender without a fight?.   Does it mean that the Government has an idea to surrender?

Shenali Waduge in her article titled ‘Bring intrusive UNHRC Resolution against Sri Lanka to a conclusion with a VOTE’ endorses Tamara Kunanayagam who with her experience had said this in many interviews.

The NAM’s objectives are clearly enunciated by Fidel Castro in his Havana Declaration of 1979.  As he said the Movement is the safety net to  ensure the national independence, sovereignty, territorial integrity and security of non-aligned countries in their struggle against imperialism, colonialism, neo-colonialism, racism, and all forms of foreign aggression, occupation, domination, interference or hegemony as well as against great power and bloc politics.