SL Army medical mission to South Sudan: Saving lives, wherever they are 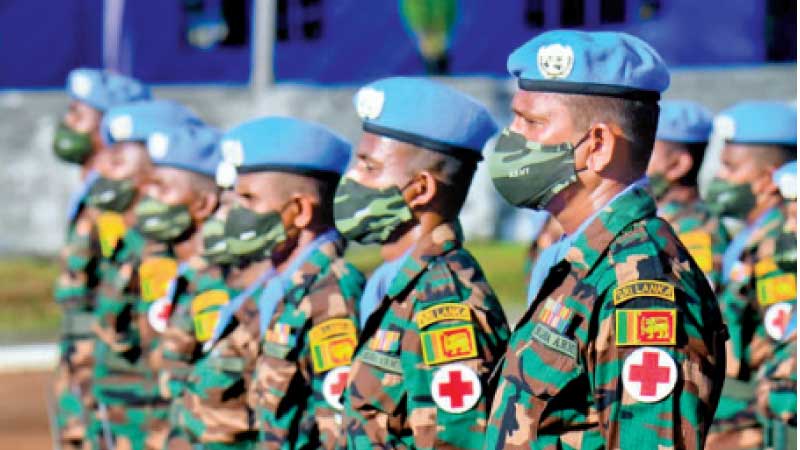 The world is engulfed by the COVID-19 pandemic. It is a crucial chapter in history when airports are closed and people are cautious about engaging in any overseas work assignments. The Sri Lanka Army Medical Corps fearlessly rose to the challenge and proudly deployed its 7th medical mission to the United Nations Mission in South Sudan.

Since 2014 the Sri Lankan military medical teams have been operating a Level-2 hospital for all UN peacekeepers in the assigned region. The current medical contingent left for South Sudan on November 17 under the command of Colonel (Dr). Roshan Jayamane. As a Troop Contributing Country (TCC), our association with the UN can be traced to 1968 when a few soldiers were sent to the Congo region. Since 2004 the Sri Lanka Army increased its commitment by deploying one full Infantry Battalion to Haiti. The incumbent Army Commander and Chief of Defence Staff Lieutenant General Shavendra Silva has been keen to sustain the Army’s obligation to this vital medical mission even amidst the COVID-19 pandemic and was present at the Katunayake Airport to wish the medical team as they left for South Sudan.

I was able to meet Deputy Director Preventive Medicine and Mental Health at Army Headquarters, Colonel (Dr.) Saveen Semage who counts 30 years of military service. Dr. Semage has the distinction of being the first Contingent Commander to South Sudan in 2014.

He explained, “Wearing the blue beret and serving under the UN is a special opportunity for every officer and soldier. In 2013, we were told of a pending UN deployment. There were UN inspectors who came from New York to assess our team. They rigidly tested our skills and capacity to run a Level 2 hospital. We met the desired criteria and began to prepare for the overseas mission. Within two months we had to organise all our logistics and other items such as ICU beds and machines. We had 13 vehicles – including trucks, water bowsers, tractors and an armour-plated ambulance. The ambulance was duly modified by the Mechanical Engineers of the SL Army. Few of us took the driving license under the UN to drive in Sudan. We left Sri Lanka on May 5 and our tour of duty lasted six months.”

Serving in a foreign land has its own risks and logistics requirements. The Sri Lankan contingent had to multi-task and work as a close-knit team. As per the UN protocol, they have three kinds of hospitals. Level 1 is a primary care hospital. Level 2 hospitals must have an operating theatre, an ICU, a physiotherapy unit, a blood bank, an X-Ray room, a medical lab, a pharmacy, a medical waste disposal unit, a dental unit and a mortuary. The hospital manned by Sri Lankan troops also has an aeromedical evacuation facility. The Level 3 is an outsourced hospital – which is outside the peacekeeping compound.

Dr. Semage recounted his experience. “Our medical troops have gained good experience in field hospitals and mobile medical treatments. We had this direct experience during the three-decade armed conflict. Many other foreign military medical staffs do not possess this experience. Our medical contingent is trained to be self-sufficient. Prior to our departure from Sri Lanka, we have a 21-day orientation programme at the Institute of Peacekeeping Training run by the Army at Kukuleganga. When we landed in South Sudan, there were cases of Ebola and Malaria, but we were fully prepared. We took our own water-purifying plant. HIV is rampant in this region. In terms of food, we procure our rations as per UN protocols. Though thousands of miles away from home we were able to eat rice and curry often.”

When wearing the blue beret and UN shoulder patch on the uniform, it is the symbol of utmost military discipline, where the soldier is a global peacekeeping ambassador. Our Army contingents have served the UN Missions with bravery, and a few have gallantly laid down their lives in the line of duty on foreign soil. The assigned region in South Sudan has between 3,000 – 4,000 soldiers engaged in UN duty from many countries. The Level 2 hospital is provided external security by another UN military force, but internal security is the responsibility of our troops. All Sri Lankan personnel have their own personal weapon, as unexpected threats can suddenly make the duty station volatile. Colonel (Dr.) Semage added, “We must maintain teamwork and sustain the welfare of our soldiers. We have a pool table and gym equipment. We play sports. In addition, we even present a dance item to showcase our culture when celebrating UN Day. Our teams can talk to their families via Skype.”

I also spoke to Colonel (Dr.) Kalana Wijewardene who served as the Contingent Commander to South Sudan in 2016. This was part of the 4th deployment to South Sudan. He said, “It is an honour to serve under the UN. We treated many patients. The casualties ranged from snakebite victims to patients with gunshot wounds. Our teams maintained a high professional standard.”

The contingent on this 7th UN mission has a total of 16 Army officers and 50 other ranks. The officers consist of four consultants (two surgeons, one anaesthetist and one physician) and also a dentist. The others are nursing officers, admin and logistics officers along with hygiene officers (similar to PHI). The soldiers include nurses, critical care nurses, radiographers, physiotherapists, medical lab technicians, dental technicians, pharmacists, cooks and ambulance drivers. The troop also includes members of the Signal Corps, Engineer Service Corps and Army Service Corps. Since 2014 all contingents have had five female nurses. During their tenure, this team will provide medical and emergency care for other UN troops and displaced civilians (classified as POC – Protection of Civilians). The Sri Lanka Army Medical Corps has extended its healing hands to South Sudan in a noble gesture of kindness and solidarity, which augments our Sri Lankan tradition of caring for others.