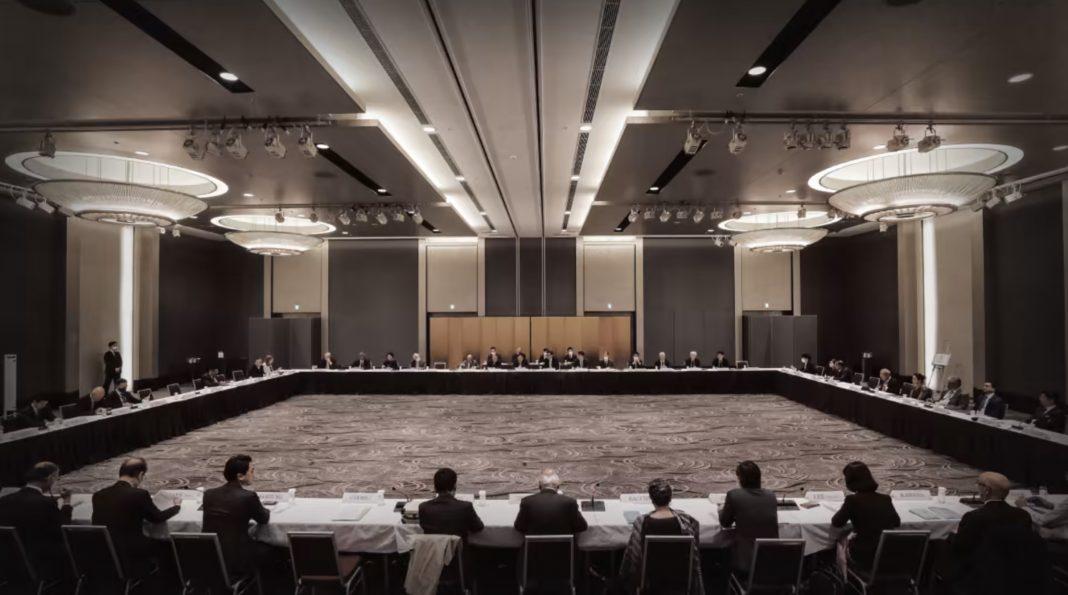 TOKYO — The Trilateral Commission, a secretive nongovernmental international organization aimed at fostering closer cooperation among the U.S., Europe and Asia, recently allowed Nikkei reporters to sit in during a two-day session of its Asia-Pacific wing. This was the first time in its 50-year history that the group allowed reporters to listen to its entire deliberations.

Two executive committee members of the Asia-Pacific Group, who were behind the decision to allow Nikkei to participate and report about the gathering, sat down for an interview to discuss why it chose to open up.

James Kondo is chairman of the International House of Japan, a nonprofit organization based in Tokyo’s Roppongi area that was established in 1952 with support from the Rockefeller Foundation. Masahisa Ikeda is the Asia regional managing partner and head of the Tokyo office of the law firm Shearman & Sterling.

Both Kondo and Ikeda are members of the executive committee, the Trilateral Commission’s steering body, and support Asia-Pacific chairman Takeshi Niinami.

Ikeda is set to become the commission’s Asia-Pacific director next March, the first change of director at the regional wing in 49 years.

Q: The Trilateral Commission has been known for its secrecy. Why open it up?

Ikeda: The Trilateral Commission has strictly adhered to, and will continue to adhere to, the Chatham House rule, where participants are free to use the information received, but neither the identity nor the affiliation of the speaker may be revealed. Reporters were not allowed to even enter the room. At our annual plenary meetings, we would have often press rooms outside, where members would brief the media on the overall discussions.

We have some journalists as members of the commission, but this is the first time a reporter was admitted for the purpose of reporting about the meeting.

t is true that the closed, rather secretive, mysterious appearance of the gathering has often worked to our advantage. But in the Asia-Pacific wing, we have noticed that recognition of the Trilateral Commission is dwindling, especially among people in their 30s and 40s. Since the purpose of the commission is to accurately grasp the megatrends of the world, bring in experts from various generations and disciplines, and to propose effective policies, it is important that we are known.

I believe that Asia has a vital role to play in the commission. For the past decade or so, U.S. policy toward Asia, especially toward China, has been narrow-minded and unyielding. This is not only hurting the world but hurting the U.S. itself.

For instance, Russia and China are neighboring superpowers with nuclear weapons. If the U.S. had teamed with China on certain aspects of Ukraine policy, the war may have settled swiftly.

One of the roles of the Trilateral Commission is to deliver such perspectives from Asia so that the U.S. can recognize that there is a different path.

At the Trilateral Commission, anybody can say anything they want, which is a tradition that I cherish. With or without reporters in the room, we need to preserve this tradition.

Q: Kondo-san, what brought you to the Trilateral Commission?

Kondo: The Rockefeller family has always strived to build stronger relations with Asia. My organization, the International House of Japan, was established by John D. Rockefeller III and Japanese journalist Shigeharu Matsumoto in 1952. John’s younger brother David Rockefeller created the Trilateral Commission, and since its launch, IHJ leaders have always been part of the commission.

Looking at U.S. foreign policy, I feel that positions on China have become very similar among Democrats and Republicans. Over in Europe, positions toward Ukraine are similar across the continent. But in Asia, views are very diverse. When it comes to sanctions on Russia, many Asian countries have either abstained or tried to maintain a neutral stance. On China, each country has even more nuanced approaches, based on their respective national interests.

That kind of diversity is important and needs to be taken into account.

Be it on economic policy or climate policy, if Asia can come together and agree on a direction, then the sheer scale of the economies or the populations almost guarantees that it will have a significant impact on the world.

I believe, therefore, that Asia holds the casting vote on the direction of the world.

The Trilateral Commission is one of the very few international gatherings where Asia is on equal footing with the U.S. and Europe, so I hope it can be an effective stage for back-channel Track 2 diplomacy.

During our regional meeting in Tokyo on Nov. 19 and 20, ASEAN members were asked what they will do in a Taiwan contingency, and they hesitated to give a definitive answer. That kind of nuance is less heard in discussions in London or New York, but they are important.

Q: How do you bring in China to the discussions?

Ikeda: Since the 2000s, we have invited Chinese and Indian intellectuals to the commission. We cannot deliver the “Asian perspective” adequately without input from China and India.

There are currently nine Chinese members in the commission. All nine were sent invitations to attend the Asia-Pacific regional meeting in Tokyo, but for reasons of COVID-19 or for the Communist Party’s national congress, nobody could come.

We want to broaden the representation, and while we will continue to invite Chinese members, we may invite people from Hong Kong to help us understand China better.

Kondo: When we talk about global opinion leaders, they always tend to be American or British scholars talking about the world. They even lead the discussion on China and India, because media tend to quote these experts. But Asia has a lot of intellectuals and there are new media outlets in Asia as well. We want to incorporate these views in our discussions.

At the time when the Trilateral Commission was formed in 1973, the U.S. and Europe were comfortable just talking among themselves and running the global economy. Some people were opposed to bringing in Japan to that exclusive club, but Japan’s rising economic clout made it necessary.

Today, because the world is becoming more divided, we need to understand different perspectives. For Europe, it will be important to include Russian views to their discussions.

Shutting out China cannot be the answer to anything. If by shutting out China that country goes away, then maybe that may be an option. But the reality is that China is a massive economic entity that will continue to be involved in all our lives. The more the Track 1 dialogue between governments become stalled, the bigger the role Track 2 assumes.

If Chinese members were to participate in future discussions, it is important for us to create an environment that is safe for them to speak, without having to fear about the political risks involved.

Q: Tackling inequalities is a challenge for both the West and Asia.

Kondo: Asia and the West have vastly different views on the future of globalization. Asia has been the greatest beneficiary of globalization, and many people in the region have been lifted out of poverty due to the integrated world. Asia has grown by serving as a manufacturing hub for the U.S. and European markets, but this has led to inequalities in the U.S. and Europe as jobs get shipped overseas.

Asia will continue to push for globalization and will have to demonstrate that Asia’s dynamic growth will be the source of growth for Western businesses. The U.K. has grasped this vision of the future and is requesting entry into the Comprehensive and Progressive Agreement for Trans-Pacific Partnership.

Unfortunately, we have not been able to shape the discussion in this context. To say that globalization has retreated and been taken over by polarization is a Western narrative. The Asian narrative is that countries like China and India have grown exponentially under globalization, and in India’s case, will continue to mark over 6% GDP growth. There is no other region like this. The discussion should be around how to share this dynamism. Instead, many Asian countries tend to simply complain to the U.S. that there isn’t enough market access to the American market. Asia needs to demonstrate how the U.S. can be part of Asia’s dynamic growth in order to reenergize trade talks.