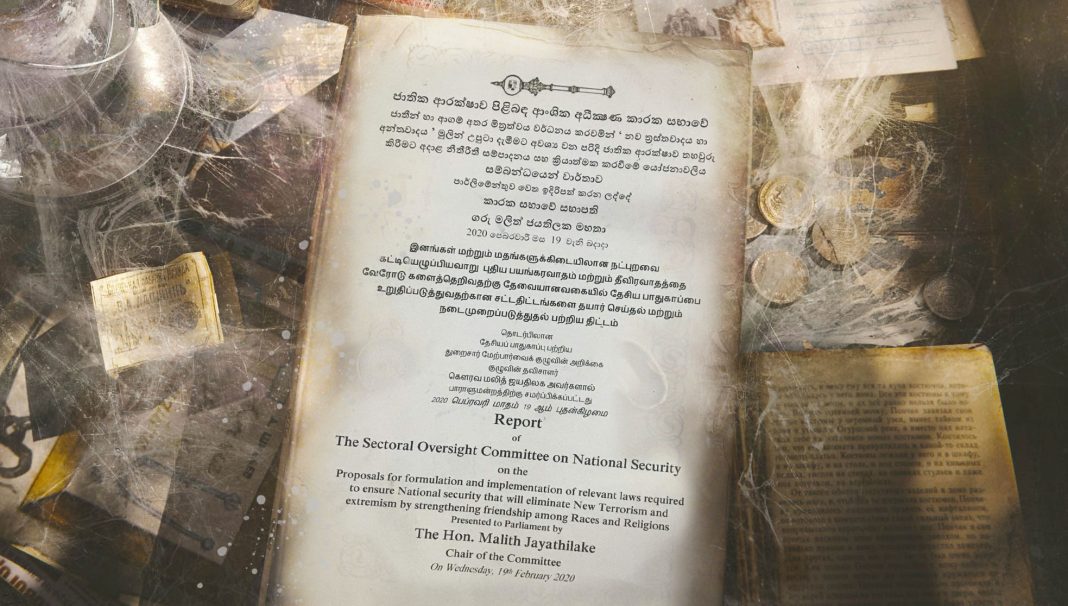 The Easter Sunday attack was a clear indictment on the then government’s shortsightedness on national security issues. The liberals who pooh-poohed Islamic extremism, the NGO racketeers for whom ‘religious freedom’ meant ‘anything goes, even terrorism’ were effectively bamboozled. They shut up.

These are yahapalanists recommendations which pohottuwa politicians are not likely to disagree with. The vast majority of them can be implemented immediately. Some require, as mentioned, amendment of the law

On February 19, 2020, i.e. days before Parliament was dissolved and probably in full cognizance of the impending General Election, a report was released by ‘The Sectoral Oversight Committee on National Security,’ appointed following the Easter Sunday attacks almost a year before.

The Easter Sunday attack was a clear indictment on the then government’s shortsightedness on national security issues. The liberals who pooh-poohed Islamic extremism, the NGO racketeers for whom ‘religious freedom’ meant ‘anything goes, even terrorism’ were effectively bamboozled. They shut up. The yahapalanists were routed at the election, and even a pathetic last-minute name-change did not help.

All that is incidental. What’s important is the report of the OCE (Oversight Committee on Extremism). The report had the OCE’s mandate clearly stated on the cover page itself: ‘Proposal for formulation and implementation of relevant laws required to ensure national security that will eliminate New Terrorism and extremism by strengthening friendship among races and religions.’ Oddly worded, but that too is incidental.

Now this is as comprehensive a report as we’ve seen on a number of key and interrelated issues. Most of the recommendations are directly or indirectly related to inter-communal tensions so perceived or defined. Many of them can be immediately implemented following relevant gazette notifications; for example in the case of the majority of recommendations pertaining to education, media, Halal certification, NGOs and defence. In the very least, the relevant line ministries can use the particular sections of the OCE report as a basis for discussion followed by policy formulation. Implementation can follow the Cabinet decisions.

Some of the recommendations for the education sector have implications beyond the subject at hand, extremism, for example the streamlining of international schools. Some are cosmetic but arguably prompted by good intentions, for example, changing the names of schools with ethnic, religious or community identity and of course a streamlining of school holidays. Some are directly related to the rise of Islamic extremism, for example the Madrasa institutions.

The OCE recommends that Madrasa institutions should be limited to training Islamic clerics and can enroll only those who are 16 years of age or above AND have completed 11 years of formal education. The OCE while acknowledging that they don’t have all the data, asserted that there are at least 1,679 Madrasas while only 317 are registered with a further 175 having sought registration. It was estimated that at least 27,000 students are enrolled in these Madrasas! The OCE recommends that 75 Madrasas are sufficient given the total Islamic population in the country.

I invite the strident voices demanding freedom of expression to read the section on ‘Electronic, Print and Social Media.’ They would, I promise, be horrified that yahapalanists could come up with such plans!

Obviously certain recommendations require amendment of existing laws and promulgation of new ones. The OCE wants the Parliamentary Elections Act No 1 of 1981 amended so that either in name or constitution a party cannot affirm or privilege a particular faith or ethnic community. This would run against basic tenets of political freedom. MP Sumanthiran ought to have resigned from the Ilankai Tamil Arasu Kachchi (ITAK) the moment he put his signature on the report. M.S. Thowfeek too (SLMC). Incidental, let’s say.

The most important recommendations are related to Muslim marriages and divorces that require amendment of Acts Nos. l3 of l951, 31 of 1954, 22 of 1955, 1 of 1965, 5 of 1965, 32 of 1969, and Law No. 41 of 1975. These correct the horrendous gender inequalities in that community with respect to marriages and divorce. They recommend, for example, the provision of legal rights to brides when signing a marriage contract, making registration compulsory, establishing 18 as the legal age for marriage, formulating laws that allow both groom and bride to seek divorce if required  etc. Most importantly it recommends that the Muslim Marriage and Divorce Act No 13 of 1951 to be considered a special law but executed under the general law of the land.

In addition, the OCE has made sweeping recommendations pertaining to the Wakf Act that make for greater accountability from religious institutions and clerics. Obviously the focus is on the Islamic community, but some of the recommendations are eminently applicable to all religious communities.

The Religious Freedom Nazis might be livid, especially those who have a bone to pick with certain religions (but not their own) and/or whose faiths have no history or numbers of the faithful of any significance (which is why, ‘equality of the ‘one-religion, one-vote’ kind is advocated even though in countries where THOSE religious communities are the majority, such generosity is hardly seen). That’s their problem.

These are yahapalanists recommendations which pohottuwa politicians are not likely to disagree with. The vast majority of them can be implemented immediately. Some require, as mentioned, amendment of the law.

President Gotabaya Rajapaksa and his government can send a copy of the OCE report to the Attorney General. The line ministries can be asked to get cracking. There’s a lot of can-do stuff in the report. Just get it done without twiddling thumbs, navel-gazing and foot-dragging because ‘those other fellows made the report.’  At least read the damned thing!