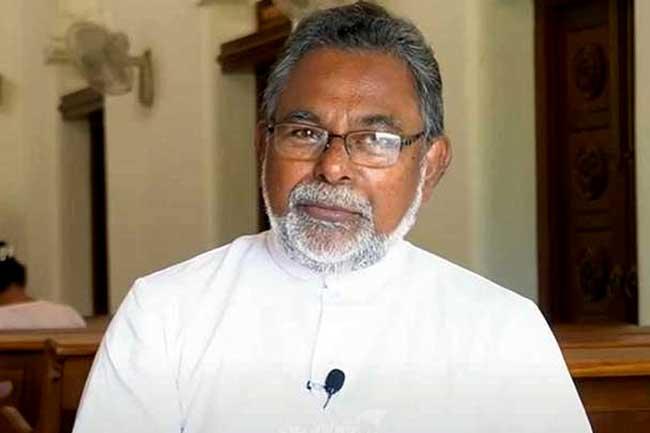 Rev Fr Cyril Gamini (RFCG hereafter) has found his voice. RFCG, after shooting his mouth and naming names in a zoom discussion, was duly complained about and required to make a statement. Having named names, he was required to offer tangible proof, for lack thereof would amount to defamation. He ducked. He hid under his own cassock. We wonder if he went to confession at any point thereafter.

Anyway, RFCG is back at his own games of casting aspersions, loose-cannoning if you will. He’s careful, RFCG is. He deliberately and meticulously avoids talking about the perpetrators of the crime: the NTJ, Zahran, Naufer and, if you want to be ideological about it, Islamic Fundamentalism. Instead he goes for soft targets and puts both feet in the mouth (as always). He talks about conspiracy, but not related to the attacks themselves; for him it’s about negligence and the alleged protection of the negligent. And, not untypically, a wide-eyed media that tends to extrapolate beyond belief attributes the allegations of this maverick priest to ‘The Catholic Church’.

RFCG was ranting in response to comments made by Secretary, Defence, Kamal Gunaratne. He asks what moral right Gunaratne has to ‘protect political leaders.’ Was Gunaratne protecting anyone? Has nothing been done about the Easter Sunday attacks in terms of investigation, legal action, compensation for families of those killed and the injured, countering extremism and in ensuring that such attacks are not repeated? Gunaratne stated some facts. The state has done much in terms of the second set of questions. The details of the numbers arrested, enlarged on bail, indicted etc., are well known. Well, RFCG clearly is ignorant of all that. Other measures taken have been detailed in numerous comments, statements and reports. Yes, RFCG is not interested in any of that. What moral right does he have, then, to talk about truth and justice? We don’t know how well versed he is about the Ten Commandments or if he does, the value he places on them, how many he has broken etc., but clearly he’s at odds with the 9th, as per Deuteronomy 5:20: ‘You shall not give false testimony against your neighbor,’ in the expanded interpretation of ‘neighbor’ of course.

The ninth commandment honors the right to one’s own reputation.[1] It finds pointed application in legal proceedings where what people say depicts reality and determines the course of lives. Judicial decisions and other legal processes wield great power. Manipulating them undercuts the ethical fabric of society and thus constitutes a serious offense. Walter Brueggemann says this commandment recognizes “that community life is not possible unless there is an arena in which there is public confidence that social reality will be reliably described and reported.”

He asks questions to which answers have been given many times, for example, ‘What are the investigations carried out by the investigation teams including the CID so far to prove that it is not such a political conspiracy?’ This is like asking someone ‘Is there any evidence that Jesus was born in what is today known as Iceland?’ and being answered, ‘Is there any proof that he was not?’ The main task of investigation is to consider what happened and based on facts to make determinations on any matter, conspiracy included. In RFCG’s court (where he is judge, jury and prosecutor) it’s a flip: conspiracy as hypothesis and all energies to be expended to determine first and foremost and to the end whether or not hypothesis holds. Bunkem!

RFCG seems to be intent on sticking his dagger into SSP and former SIS chief Nilantha Jayawardena. Nilantha Jayawardena as indeed is anyone and everyone in the intelligence agency had to do his job: obtaining intelligence information and passing on the information to authorities that are mandated to act upon them. No negligence there. Negligence can only be attributed to agencies and individuals mandated to act upon such information. Negligence, obviously, is a significant fault.

Former President, Maithripala Sirisena was negligent, even though he is not an intelligence officer nor an investigator. The then Minister of Public Administration and Management and Law and Order Ranjith Maddumabandara, also not an intelligence officer nor an investigator, was negligent. They were both aware. They did nothing. NOTHING, repeat. The hero in charge of stuff during that period, Shani Abeysekera, is far more culpable since he had the leads and brushed them off. Indeed he had some of the would-be terrorists cornered, but was either clueless or slothful. For a full discussion, read ‘The Easter Sunday Attack: negligence and the negligent’ (http://malindawords.blogspot.com/2022/04/easter-sunday-attacks-negligence-and.html). We know what happened later. RFCG knows too, but he doesn’t mention the man at all. Why not?

For the record, consider the following: 735 suspected of direct or indirect involvement in the terrorist attacks were arrested. Of them, 196 are in remand custody, 19 in detention, 81 served indictments while 453 have been enlarged on bail. There are 27 cases filed against 79 persons in the high courts of Gampaha, Candy, Kurunegala, Puttalam, Nuwara Eliya, Batticaloa, Colombo and Kegalle are being heard by three-judge benches in terms of 25,753 charges.

There’s more: Assets, including property, buildings and vehicles worth Rs 365 million as well as gold worth Rs 168 million belong to the suicide bombers and relevant organizations have been confiscated so far. All relevant agencies have taken innumerable steps to investigate and press charges on all persons who have directly or indirectly supported extremism, regardless of who they are; politicians, public and private sector employees and officials make up this list.

Is RFCG interested? Of course not. He’s the judge, let us repeat, the jury and the prosecutor. He’s not concerned with the perpetrators or the ideology that spurred them on. Instead, he’s chasing a ghost, some mahamolakaru (mastermind) and his thesis is that the negligent were in fact masterminds. Speculation, speculation! Humbuggery, humbuggery!

Seriously, if conspiracy is the big-word here, RFCG is clearly the most vocal conspirator of them all! I wouldn’t go as far to say that the blood of the victims are on his hands, but RFCG’s hands are anything but clean.