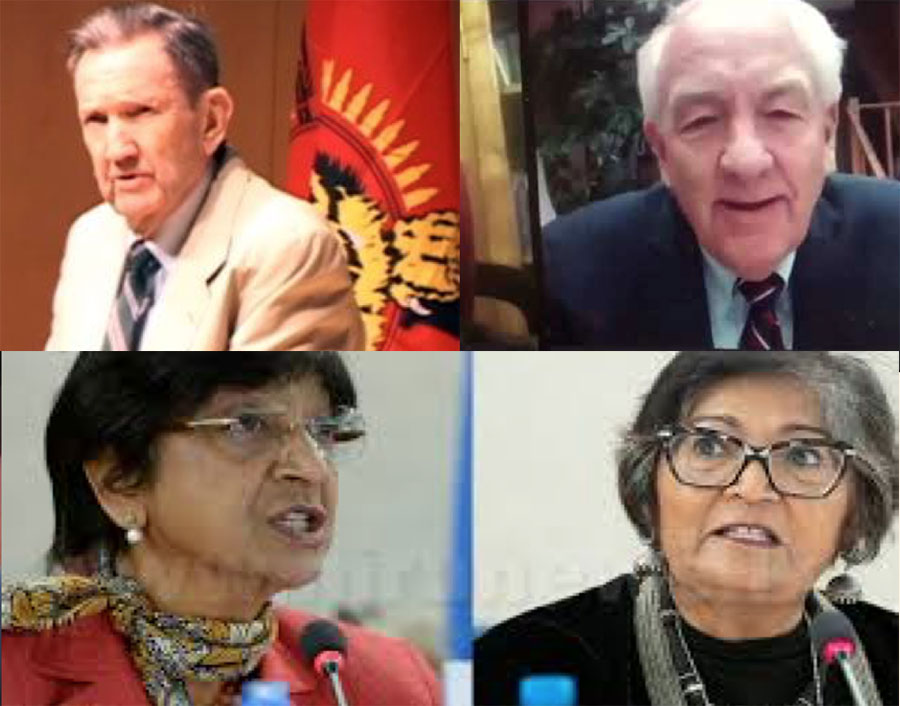 We have 4 international figures serving in the international ‘justice & world peace’ system now closely associated with the TGTE. Ramsey Clark’s association with LTTE goes back to 1996, Stephen Rapp after retiring is now buddy buddy with TGTE so much so that he remembers in 2021 the former Sri Lankan defense secretary and present President of Sri Lanka telling him that he killed surrendered LTTE leaders in 2009. “I killed them, I killed them, I killed them” are supposed to be the lines Rapp was told and the 72year old lawyer remembers this only in 2021 (7 years later) Mind boggling as to what else he has forgotten! Better see a doctor for dementia! Then we have a EU employee who is supposed to be paid to look into South African affairs but is 24×7 preoccupied with Sri Lanka, for someone who has never travelled to Sri Lanka, what drives Yasmin Sooka’s focus on Sri Lanka is equally mind boggling. Then there is Navi Pillay former UNHRC head now appearing on Mullaivaikkal Memorials! The four examples, highlight a clear conflict of interest, as all four are clearly linked to a party to the conflict and certainly raises their bias.

Ramsey Clark was US Attorney General in 1967.

The judgement was given in 1999 – United States replies that a court cannot make the determination the LTTE wants because recognizing foreign states is solely entrusted to the political branches, and the United States has not recognized the LTTE. “Who is the sovereign, de jure or de facto, of a territory, is not a judicial, but a political question, the determination of which by the legislative and executive departments of any government conclusively binds the judges, as well as all other officers, citizens, and subjects of that government.” Jones v. United States, 137 U.S. 202, 212-13, 11 S.Ct. 80, 34 L.Ed. 691 (1890).

In 2010, a year after LTTE defeat, Prabakaran’s legal advisor sets up TGTE and appoints himself its Prime Minister. This event held at New Yorks UN Plaza hotel was attended by former US Attorney General Ramsey Clark

In 2012, Ramsey Clark a former US Attorney General pays glowing tribute to Prabakaran

“his achievements for the Tamil’s are legendary”

“he took up arms to free the Tamils of Sri Lanka”

“Prapakaran moved from military action to a difficult diplomatic cease fire, now approaching the beginning of its fourth year, in which he revealed skills as a statesman that equal his skills as a soldier”

In 2014, TGTE announced its new Senators

In October 2016 more retired international figures joined TGTE alongside Ramsey Clark. Justice K P Sivasubramaniam former Judge of the High Court of Madras India joined former US Attorney General Ramsey Clark to file a communication with the UNHR Committee against the 6thamendment of Sri Lanka’s Constitution as violating freedom of speech and conscience guaranteed under Articles 18 and 19 of the ICCPR.

Stephen Rapp visited Sri Lanka in 2012 & made his 2ndvisit to Sri Lanka in 2014 in the backdrop of Navi Pillai, UK PM Cam and others on behalf of the UK headquartered Global Tamil Forum (GTF) demanding that Sri Lanka should be hauled up before an international war crimes tribunal.

In September 2015, JustSecurity interviewed Stephen Rapp and his words are interesting “

In 2016, Tamil Guardian interviews Rapp in London when he arrived to participate in the launch of the International Truth & Justice Project report. https://www.tamilguardian.com/content/we-must-be-‘tough-and-supportive’-justice-sri-lanka-–-interview-stephen-rapp

Based on this report Rapp issues a statement on 15 March 2017.

Rapp declares that the GoSL has to give a specific time frame and benchmarks while the special prosecutor’s office (independent of the Attorney General) must be immediately established to gather evidence & build cases for the special international court by international lawyers, international investigators & staff.

The best part comes in Rapp’s recommendation of Sooka

http://tgte.org/?p=6847(transcript of oral statement by Rapp)

Then in March 2018 Rapp was in Geneva on invitation of TGTE to participate in TGTE side event facilitated by Manikavasagar of TGTE in Geneva titled “How the international system has failed to provide accountability to mass atrocities: ongoing illegal detention, torture and sexual violence against Tamils in Sri Lanka” https://youtu.be/Pe3LBBUZpQE

On 22 May 2020 Stephen Rapp the ‘distinguished Fellow at the US Holocaust Memorial Museum’s Centre for Prevention of Genocide’ and Fellow at The Hague Institute for Global Justice addressed the TGTE Parliament (in the sky) where its PM is Prabakaran’s former legal advisor! Interesting why Rapp does not mention what Gotabaya is supposed to have told him in 2014!

Interestingly, an open letter was sent to Rapp by Warna Hettiarachchi in 2014 demanding why he is not investigating LTTE fronts- that question is answered years later and explains why Rapp cannot investigate entities that he is associating and is a special guest of. http://www.lankaweb.com/news/items/2014/01/09/letter-to-stephen-rapp/

So should we be surprised that Stephen Rapp appears on 21 February 2021 in a webinar organized by the Global Tamil Forum, the Canadian Tamil Congress, Sri Lanka Campaign for Peace & Justice& Centre for Human Rights & Global Justice.

Aligning with a group party against the GoSL & Armed Forces seriously impacts their credibility.

Daya Gamage has written on Stephen Rapps cover-up of US role in Rwanda in 2012 & 2014 https://umoya.org/2012/02/06/us-war-crimes-chief-stephen-rapp-in-colombo-covered-up-rwanda-genocide-to-absolve-us-culpability/

She is the former EU paid Executive Director of the Foundation for Human Rights in South Africa since 2001, within which she is separately operating an entity called International Truth & Justice Project (ITJP) EU is mum on how an EU funded South African NGO can operate a project on Sri Lanka. Whether EU is funding ITJP is also unclear! But ITJP churns out reports far more than any work done on South Africa. TGTE has awarded her the 1stNelson Mandela Memorial Award in 2017!

The 2014 ITJP report was funded by the British Foreign Office through the Bar Human Rights Committee of England & Wales – of the 40 cases reported majority were former LTTE illegal combatants seeking asylum!

TGTE is also associated with the Sri Lanka Campaign for Peace & Justice– surprise surprise Sooka is on the Advisory Council where Board members also include Callum Macrae of Channel 4. A host of other former international players are also part of this set up. Excellent retirement scheme!

Thus in March 2014, Sooka as an Advisory Council member for the Sri Lanka Campaign for Peace & Justice led a petition joined by Desmond Tutu, R Sambanthan, Wigneswaran and 35 others to UNRC to set up a Commission of Inquiry against Sri Lanka.

Joining Yasmin Sooka is Navi Pillay – both from South Africa though Pillay is a lawyer of Tamil ethnic origin. Having retired, she appears on 20 May 2020 on a video message relayed to the world which has exposed her bias. She extensively quoted from a personally commissioned report that had no mandate from UNSC or UNGA and chose not to even table the personally commissioned Ban Ki Moon report in the UNHRC for Sri Lanka to formally respond. Thus the legality of OISL remains open. She has helped create a precedent where for the first time UN was investigating a conflict that had concluded. Her 2020 May speech shows her lack of sympathy for the Sinhalese & Muslims killed by LTTE and explains why she chose not to visit a single victim during her visit to Sri Lanka.

Self-admission by TGTE connecting it to the separation of Sri Lanka https://www.tgte-homeland.org/wp-content/uploads/TGTE-and-Tamil-Struggle-from-1948-to-2020-Booklet-2.pdf

Thus the LTTE kitty is doing wonders. Excellent means for post-retirement and time pass as well as be able to continue one’s self-importance internationally at the fate of innocent victims and countries. We can imagine how much they abused their office!

It would be good to do up a list of former international figures now associated with pro-separatist LTTE fronts.