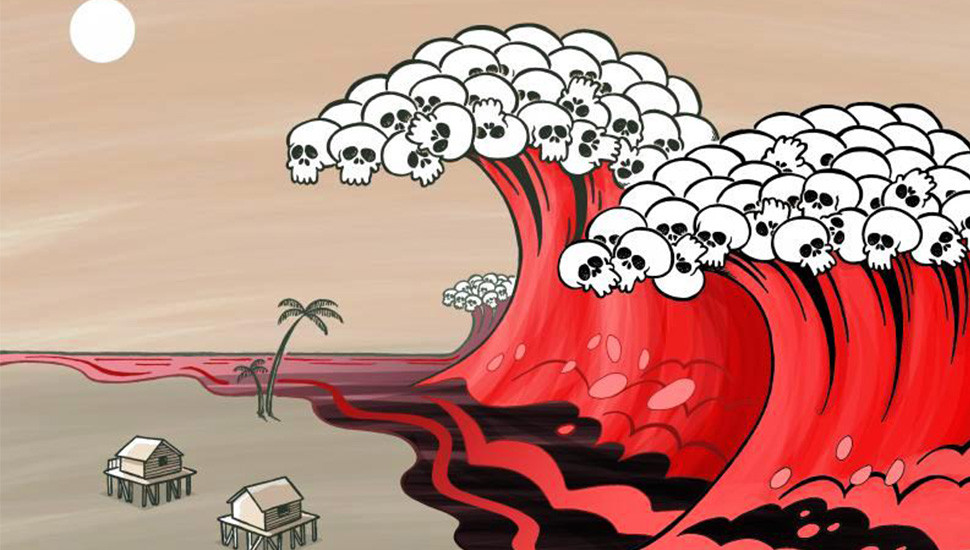 For a long time, I have been complaining that the west has been paying little attention to the relative success of Sri Lanka in dealing with the pandemic. I made this point again on a comment thread on YouTube reacting to a GOSL video explaining what actions the government had taken. Most of the comments on the thread were broadly supportive of the video, of the government and of my comment. There was one glaring exception; someone calling himself ‘poorpoor’ who violently abused Sri Lanka, saying that the deaths must be higher and being covered up. Nobody agreed with him and his comments seem to have disappeared. A new pseudonymous troll, who seems an awful lot like those malignant entities who swarm all over the comments sections on Colombo Telegraph,  has taken his place, and is crowing that we have egg on our faces now that there is a new surge of cases in Sri Lanka and we should be embarrassed about our boasting.

It seems to be a very odd thing to find joy in Sri Lanka’s new outbreak of the virus. I take no joy in the fact that nearly 100,000 people are catching coronavirus every day in England, and the daily number of deaths is 350. Britain has crossed the one million mark for total cases, according to a New York Times database, and its death toll from the virus is 58,925, one of the highest in Europe. This is well past the civilian death toll from the Blitz in World War Two, terror attacks and soldiers lost in Afghanistan and Iraq.

Timothy Snyder, the distinguished American historian, pointed out that more Americans have died of the virus than were killed in Vietnam: “Coronavirus has killed more Americans than the Wehrmacht, or the Japanese imperial army, or indeed any other battlefield foe. We endure the equivalent of 9/11 every few days. This time, though, Americans took decisions that killed horrendous numbers of other Americans.”

The ICN (International Council of Nurses) V has revealed that as many nurses have now died from coronavirus than were killed during the entirety of the First World War. The latest figures collated by the federation of 130 national nurses’ associations show that 1,500 nurses have lost their lives since the pandemic began around the world. However, the ICN expects the figure of 1,500 to be a significant underestimate, as it only includes those who have died in 44 countries where data was available.

The total number of COVID-19 cases reported in Sri Lanka rose to 12,970 and the number of deaths has risen to 30. Upul Rohana, President of the PHIA (Public Health Inspectors’ Association of Sri Lanka), said the spread of COVID-19 in the CMC (Colombo Municipal Council) area was ‘slightly out of control.’ Dr Ruwan Wijayamuni, Chief of the CMCPHD (Colombo Municipal Council Public Health Department), denied that the COVID-19 situation in the CMC area was “somewhat out of control”.

Sri Lanka’s new clusters were first found in a garment factory in Minuwangoda but the infection of a fish market in Peliyagoda, where large numbers of traders, buyers from restaurants and individual customers buy each day, led to a wide spread of the disease.

I wrote about the Brandix situation in these pages on October 15. Brandix issued a number of statements denying allegations that were circulating on social media that they were bringing in workers from India to work in their factory at Minuwangoda and not following the correct procedures on testing and quarantine. On 7 October, a statement said, “no parties from India or any other country have had access to the facility during this period.”

I do not have the resources to be an investigative journalist but I can analyse statements and balance one side against the other. Why did Brandix deny bringing workers from India and then admit to bringing Sri Lankan workers from India? The issue is not the nationality of the workers but the fact they were brought in and they appear to have brought the virus with them. Why were they brought in?

Why did Brandix issue the bold statement: “Brandix DOES NOT have the authority to operate a private aircraft in & out of India!” when it is well-known that Brandix CEO, Ashroff Omar, is on the board of directors of Sri Lankan Airlines and Brandix admitted on October 7,  “We operated three chartered flights from Visakhapatnam, India” and the aircraft chartered belonged to Sri Lankan Airlines.

If Brandix followed the recognised government protocols “under the supervision of the respective PHIs”, why does the PHIU deny participating?

Brandix received support from former Sunday Leader journalist and Newsline TV presenter Faraz Shauketaly: “The fact of the matter is that all Sri Lanka has an attitude of complacency brought about by several weeks of literally leading the global pack with relatively low positive cases. Somewhere for whatever reason it would appear that Cv19 spread to the ranks of Brandix staff. It is too much to believe that the senior management and Board of Brandix gambled and forced contractors to carry on in spite of showing signs not conducive to CV19. Brandix is a Sri Lanka success story. It is easy to be critical but think of the positives this company has brought to the general wellbeing of our nation. Let us show some sympathy, some decorum and some understanding at this critical time for our nation as a whole. And learn from the collective laxity all around.”

Faraz Shauketaly, uses weasel words to deflect attention away from Brandix: “learn from the collective laxity all around”. Shauketaly has no new evidence to offer, merely the assertion that his well-heeled friends at Brandix could not possibly behave badly. This is rather like Boris Johnson blaming the British public for the spread of the virus in the UK and defending his cronies like Dido Harding. There is little doubt that this new cluster originated with Brandix. Don’t blame the public, Faraz. The public won’t like that.

Bad Examples for the People

In the UK, Boris Johnson recently suggested that the reason the virus was spiking was because “everybody got a bit, kind of complacent and blasé”. This is the man who was boasting about not wearing a mask when he visited NHS hospitals, who was proud of shaking hands with front line health care workers (one nurse who met him subsequently died of the virus and he came close to death himself). Public compliance was not encouraged when Boris Johnson’s chief adviser blatantly flouted the rules that he had helped to formulate. Police and the Crown Prosecution Service have been handed a 225-page dossier urging them to investigate Dominic Cummings for allegedly perverting the course of justice, (a crime which could lead to a life sentence) in relation to a statement about his journeys to the north-east of England at the height of the pandemic.

UK ministers, including the prime minister himself, seem to get very confused about the guidelines they are expecting the public to follow. Michael Gove apologised after wrongly claiming people may be able to play golf or tennis, while Robert Jenrick mistakenly said people from a whole household could take a stroll with another person from another household.

Some individuals and groups of ordinary people will always behave stupidly and recklessly. I heard the story that a man who lives in a housing complex near the HNB ATM that I use felt some symptoms and went to a surgery near the Sampath ATM that I use to get himself tested. He had to wait a few days for his result and, rather than staying at home, went to the Cargills branch that I use and several other shops that I use and had a jolly time visiting friends. In the UK, there were horrendous images of people crowding into Soho pubs and onto beaches.

AG Calls for Brandix to Be Investigated

The Sunday Times of Sri Lanka reported that the state intelligence agencies conducted a thorough check on Brandix operations and that their findings, reported to President Rajapaksa, were “extremely damning”. Attorney General Dappula de Livera directed acting IGP CD Wickramaratne to investigate the COVID-19 spread from Brandix Minuwangoda and submit a progress report within two weeks.