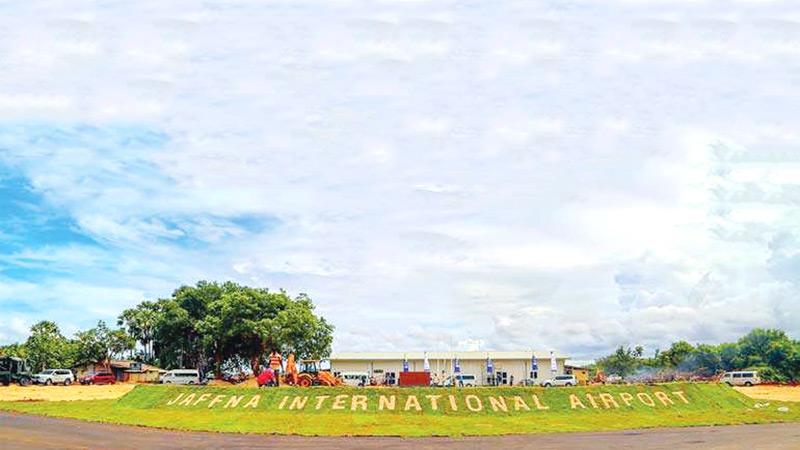 Compared to the East, the situation in the Northern Province was worse because it had been under the control of the LTTE for over two decades.

Most of the infrastructure facilities and factories in the North were totally destroyed.

Based on the mandate of the PTF, a master plan was formulated called “Northern Spring” embodying the tasks to be implemented in the affected areas.

The Darusman Report criticised the steps taken by the former Government to promote reparations for the benefit of victims and their communities through development and aid programs. The Report stated that “development programs and humanitarian assistance are not to be equated with reparations.”

The panel argued that the government must use reparations as a demonstration of genuine acknowledgement of violations and redress for victims, not as a cover-up for accountability.

The Darusman Report cites no settled authorities to support these claims that development programs and humanitarian assistance may be regarded as reparations, and it is nowhere legally required that reparations are made a part of an admission of guilt.

It is common for States to engage in the process of reparations “without acknowledging” any legal responsibility for human rights violations or crimes that were committed. The Colombian government establishment of a reparation program is an example.

The UN has outlined that reparation programs should provide concrete remedies to victims, promote reconciliation and restore public trust in the State.

By Act No. 34 of 2018, the Parliament of Sri Lanka approved the setting up of an Office for Reparations in Sri Lanka.

The objectives of the Office for Reparations among other things is to identify aggrieved persons eligible for reparations and to provide for the provision of individual collective reparations to such persons.

The USA noted in 2016 that Sri Lanka is in the midst of Constitutional Reform. Freedom House, a USA based NGO focused on democracy and human rights, improved civil liberties and political rights, gave Sri Lanka an upward trend arrow due to the generally free elections for Presidency in January and Parliament in August 2015 and improved conditions for freedom of expression, religious freedom, civil society and judicial independence.

These reforms have remained the same even after the free and fair elections that brought President Gotabaya Rajapaksa to power in November 2019 and the success of the present Government at the Parliamentary elections held subsequently.

Truth is more important than facts – the diluted unsubstantiated evidence regarding Sri Lanka which has prompted the US to bring another Resolution against Sri Lanka by Congress woman Deborah Ross.

There is nothing new in the new Resolution Deborah Ross has submitted to Congress as these allegations already exist in old bottles.

On the contrary Sri Lanka has preserved democracy to the Tamil community of Sri Lanka by giving the Tamils a new lease of life after the crushing of the LTTE in May 2009.

The people who provide these false allegations against Sri Lanka are wolves in sheep’s clothing. Inwardly their sole intention is to divide Sri Lanka and set up a separate homeland for the Tamils. It is a shame that righteous people such as Deborah Ross have fallen prey to these wolves.

All civilised nations cherish democracy. It is this intuition that Sri Lanka wanted for all Sri Lankans irrespective of colour, race or creed wanted and it is for the reason of preserving democracy and sanity in our Island that after 30 years of tolerance the government of President Mahinda Rajapaksa decided that a military option was the only solution to save the innocent Tamil population from the clutches of a tyrant.

Why a military solution?

Sri Lanka grappled to find a solution to the battle against terrorism for a period of over 30 years. Countless peace negotiations were conducted by the Government with the LTTE.

Every government during this 30 year period provided considerable concessions to the LTTE to entice the terrorists to lay down their arms and negotiate a peace process.

In January,1995, President Chandrika Kumaratunga signed a truce with the Tigers, it was not the first cessation of hostilities since terrorism began, but it promised to be what Kumaratunga herself described as the “dawn of a new era”.

Yet true to ruthless form, the Tigers violated the peace accord 100 days later, marking the breach by a massacre of 42 unarmed Sinhalese villagers.

This was not the first breach of a truce by the Tigers, they have consistently used ceasefires as a feint, silencing their arms momentarily only to regroup, refreshed at a later date.

The Wall Street Journal of 10th August 1995 had the following:

The inclination in some quarters to excuse anything under the name of “self-determination” is giving way to a more nuanced view that recognises the need of legitimate states to defend their integrity.

The Times of August 3, 1995 under the title Tiger Terror – Sri Lanka is being mauled by its ruthless Tamil separatist wrote as follows:

The elimination of one man, Prabakaran, could fashion a miraculous change in the island’s politics of conflicts.

Since the elimination of Prabakaran on 18th May 2009, not a single bomb exploded in any part of the island nor was a single Tamil killed during the past 12 years. Isn’t this the miraculous change that was predicted?

Despite all the efforts of the Government the LTTE continued with its ruthless killings which during the terror period killed President Premadasa, Prime Minister Rajiv Gandhi, Lalith Athulalthmudali, Gamini Dissanayke, a large number of moderate Tamils, high ranking military officials, attempted assassination of President Kumaratunga, killing hundreds of devotees who had gathered under one of Sri Lanka’s most sacred places of worship, the Sacred Bo Tree of Anuradhapura, the killings of over 30 bhikkhus at Arantalawa, bombing of the Dalada Maligawa in Kandy, slaughtering of men, women and children in the border villages, bus and train bombings, young suicide bombers some of them young girls thereby killing innocent civilians all for the lust of their leader Prabakaran who was in vain pursuit of a dream he would never achieve.

President Rajapaksa was of the view that if Prabakaran is successful in carving out a separate homeland for the Tamils in the North and East, the Sinhalese populace of around 74 percent of the country would be in peril having a tyrant or a despot at its doorstep, more importantly this tyrant could be supported by the large Tamil population in South India which is only a few kilometres from the North.

Several groups in South India conducted campaigns and sought the support of the Indian Central government to intervene on behalf of the Tamils in Sri Lanka.

The final operation was a “humanitarian operation” which saved the lives of hundreds of innocent Tamil civilians albeit at a heavy price to the Sri Lankan security forces.

The rights of families of missing persons

Since the end of the conflict in May 2009, families of missing persons have been seeking information regarding the whereabouts and the fate of their missing loved ones. For families of missing persons to seek information and submit their petitions the government of Sri Lanka appointed The Lessons Learnt and Reconciliation Commission (LLRC) and the Paranagama Commission.

Both Commissions made a large number of public sittings in the North and the East. Families of missing persons were invited to submit their petitions to these Commissions. Evidence was recorded by both Commissions in public in a transparent manner which was attended by the media, civil society organisations, and representatives of diplomatic missions in Sri Lanka.

Based on the petitions submitted by the families of missing persons and the evidence they gave at public sittings, most of the missing loved ones disappeared prior to 2009. The LTTE was in total control of the North of Sri Lanka for more than two decades.

The LTTE forcibly recruited people including young children as much as age 12 as combatants. The Paranagama Commission recorded more than 80 percent of those missing would have been killed during fighting.

A large number of LTTE combatants died during the last phase of the fighting, some actively involved as combatants of the LTTE and some executed by the LTTE in their attempts to escape to the government controlled side.

This article represents solely the writer’s views on the allegations of human rights by Sri Lankan security forces which has allowed the USA, and the Western countries to submit Resolutions to the Human Rights Council and the United Nations. Unfortunately, the information that is gathered by those who submit these Resolutions are unsubstantiated, exaggerated by interested parties who are supported by the Tamil Diaspora.

The contents of this article regarding the human rights violations by the USA during the Vietnam War is in no way to doubt the USA’s record on human rights.

It was that such violations were inevitable given the nature of the furious war that prevailed in Vietnam. What the Sri Lankan Security Forces faced was no different from the situation that was faced by the US soldiers in Vietnam despite the fact that the policy of the government was zero civilian casualties.

The reason for the civilian casualties in Sri Lanka was due to the LTTE using civilians as combatants and putting them in the front line of defence.

Deborah Ross, the USA and Sri Lanka have been great friends and Sri Lankans appreciate the greatness of the American people and the value America adds to the world. Sri Lanka is a developing country and the American Government has assisted Sri Lanka in numerous ways, and Sri Lanka wants America to continue its assistance and maintain the friendly ties that the two countries have enjoyed.

Many Sri Lankans believe that wolves in sheep’s clothing using money extorted from Tamils living in the West, the USA and Canada to destabilise Sri Lanka by creating a rift between all communities in Sri Lanka have been living in peace and harmony for generations.

A better peaceful future could be carved out for all communities of Sri Lanka if Sri Lanka is permitted to solve its problems among Sri Lankans without interference from any source.

Deborah Ross, I have addressed the issue of each of your concerns you contemplate in Resolution H RM 413. These facts are real and have been taken from what transpired at the LLRC and Paranagama Commission, the findings of the Advisory Council of foreign experts and the details of the accelerated development programs initiated by the Government since the liberation of the North and Eastern Provinces.

Sri Lanka would be more than happy if you visit Sri Lanka and see for yourself and understand the true story before proceedings with Resolution H RM 413.