Report on Liberation Tigers of Tamil Eelam (LTTE) Proscription in the U.K. 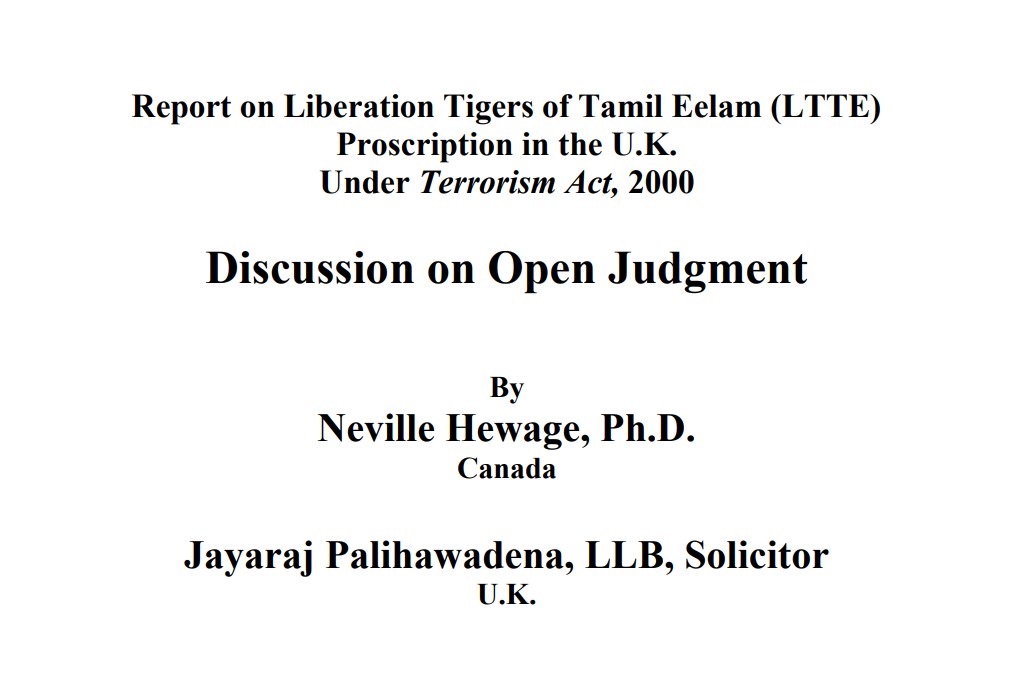 A transnational terrorist group, Liberation Tigers of Tamil Eelam (LTTE), is one of the world’s
most ruthless and wealthiest terrorist groups. Group’s annual income is about US$300 million.
They have raised funds from human smuggling, associated with other terror groups by selling
and smuggling weapons, money laundering, drug trafficking and other illegal activities.

Proscribed Organizations Appeal Commission (POAC) also heard that LTTE international
network is still intact, even when the group was militarily defeated. Our report highlights
LTTE’s international terror network. It has raised serious questions of facts that need to be
considered before deproscription. However, POAC failed to evaluate these facts in its decision.
When preparing Part I of the report, we have not considered LTTE’s violent past. We have
evaluated the most current activities of the LTTE. LTTE’s past activities have been analyzed to
determine the group’s pattern of conduct.

We have concluded that it is reasonable to believe LTTE is concerned with terrorism pursuant to
s 5 (3) (d) of Terrorism Act, 2000. Therefore, its proscription should remain and include in
schedule 2.

Part II of the report provides a briefing of how the LTTE activities threaten the social order and
British society. Tamil gangs are a result of the refugee crisis created by the LTTE. Tamil gangs
are involved with credit card scams and street violence. Coercion by the LTTE has become a
widespread problem in the U.K.’s Tamil enclaves. This is particularly troubling since many of
the Tamil refugees in the U.K. originally fled Sri Lanka because of the LTTE’s persecution, not
by the ruling majority. Thus, a peculiar arrangement now exists in the U.K.’s Tamil enclaves,
with persecutors entrenched among their victims in a distant receiving state. In this case, refugee
status has failed to deliver the protection it promises to the persecuted.

Part III of the report provides the most recent court cases against LTTE as a result of their failed
attempt to revive the organization. However, vigilant security and intelligence apparatus in Sri
Lanka were able to thaw LTTE attempts.

The report also highlights how deproscription will result in a massive influx of asylum seekers.
LTTE’s international human smuggling network is ready to bring thousands of asylum seekers to
the U.K.

Finally, the deproscription of the transnational terror group LTTE should be considered not only
legal means, how it will affect the public and foreign policy of the U.K., in a broader concept.