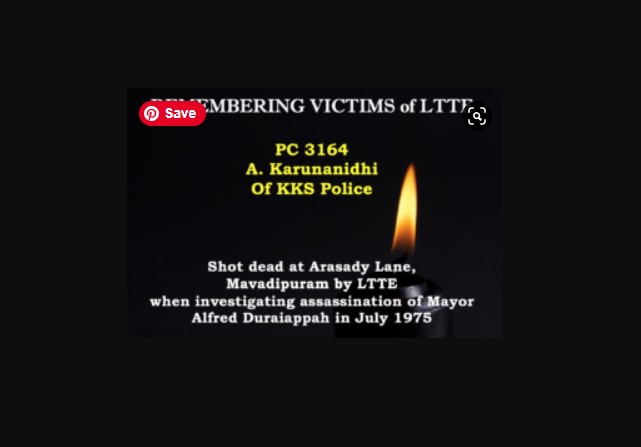 LTTE celebrated Valentine’s Day by killing. Many are led to believe LTTE represented Tamils. They may like to then explain why LTTE started its killing spree by aiming at Tamils first?LTTE’s first shot was fired at a Tamil in 1975. The victim was a Tamil Mayor – Alfred Duraiappah. He was killed as he stepped out of a kovil in Jaffna. The assassination showed what scant regard LTTE had for people going to worship. LTTE’s 2ndshot was also fired against Tamils. Unfortunately, the first victim from the Sri Lanka Police force was PC 3164 A Karunanidhi. He was shot dead while investigating the assassination of Mayor Alfred Duraiappah.

So 2 killings are significant and should be sent to the UN and UNHRC as well as the diplomatic community to ask them why LTTE would kill Tamils if LTTE was representing Tamils?

Who can answer this?

GoSL must take action on this 1976 Vaddukoddai Resolution.

Ironically, it was also in May 2009 that the Tamil political goals and the Tamil militant goals came to a halt with the reunification of the entire island under one flag, one constitutionwith the defeat of the LTTE.

LTTE was not the only armed militant group – there were many others. LTTE eventually ended up killing the leaders of these other Tamil militant parties as well as some of their followers. These were all Tamils killing Tamils.

Who can give even a ballpark figure as to the number of Tamils killed by Tamils?

The most important factor to remember is that LTTE killed Tamil Mayor Alfred Duraiappah in 1975 and killed the first Tamil policemen A Karunanidhi in 1977.

ITAK uses discrimination as an excuse to justify its separatist demands, but ITAK was formed in 1949 when Tamils were the privileged lot under British rule.

Karunanidhi was not the ONLY Tamil policemen killed by LTTE – scores more were killed with the intent to scare Tamils from joining the police force and diligently working for the State. After scaring Tamils from joining public service or police force, the LTTE propagandists go crying to the international community that the Tamils are not given jobs in State sector.

A Karunanidhi would have been alive today if LTTE had not shot him.

Alfred Duraiappah may have been alive today & celebrating his 95thbirthday if LTTE had not shot him.

Much loved Lakshman Kadiragamar would have been able to celebrate his 89thbirthday inApril if LTTE had not assassinated him in his home during that infamous ceasefire too!

Scores more Tamil policemen would have been alive today if LTTE had not shot them.

We cannot forget the 600 plus unarmed & surrendered policemen who were also slain in cold blood by LTTE.

It would have been nice to have a photo of PC 3164 A Karunanidhi for all to see what a crime LTTE committed by shooting a policeman on duty just doing his job.

Our prayers are for his family who will be mourning his death today.

It’s a pity that the UN and UNHRC and diplomatic community prefer to cry for LTTE terrorists and wish to enable memorialization of LTTE dead instead of the real victims.