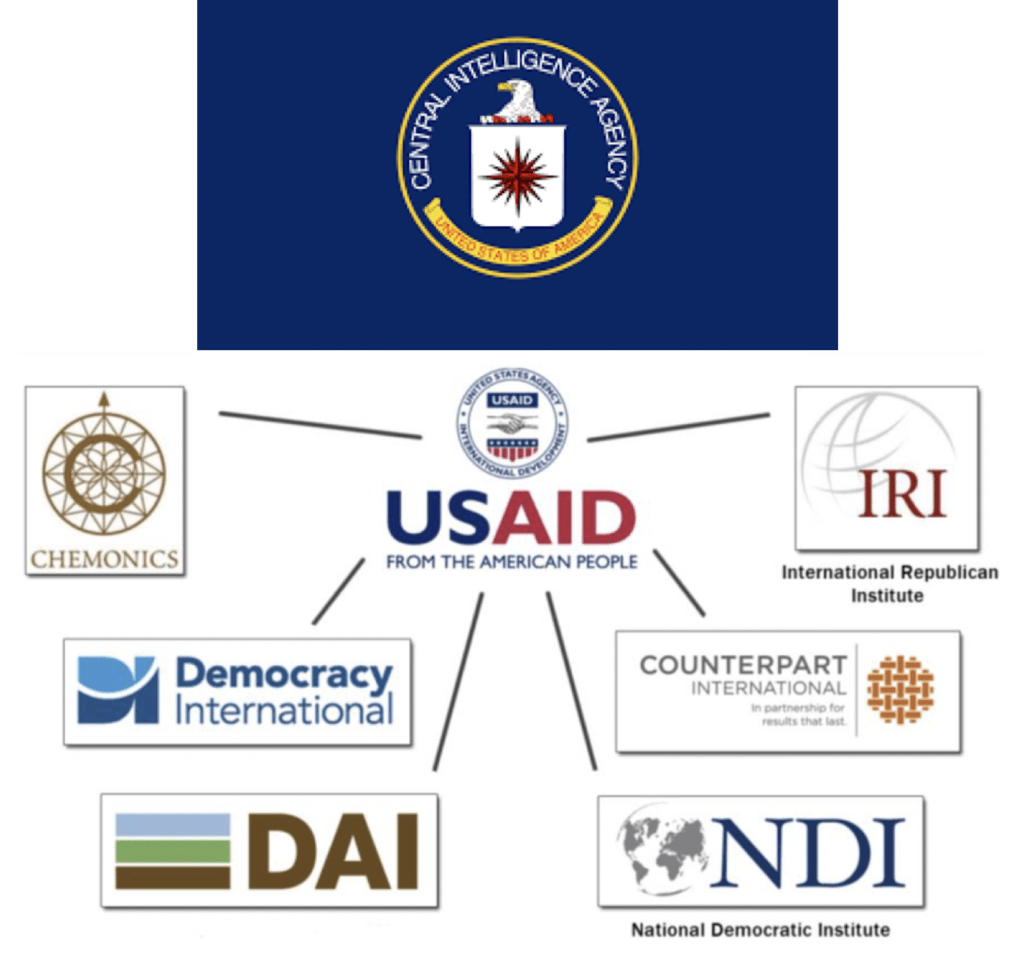 US foreign policy does not change whatever party comes to power. American Exceptionalism is at the forefront of US foreign policy for Democrats & Republicans. Soft-power tools are terms “democracy” “freedoms” “rights” “gender equality” “youth empowerment” lavishly used to exert pressure on third world target nations. The International Republic Institute was led by late John McCain while National Democratic Institute was led by late Madeleine Albright. Nothing happens in a country which is of geopolitical interest naturally or spontaneously. This is what citizens must understand first of all. All the leaders following ‘national’ themes are often ousted. It takes a smart ‘national’ leader to outsmart the regime change operators balancing the threats & challenges but rolling out national programs regardless.

National Democratic Institute was created by the CIA in 1983 for the purpose of working with civil society to advance US foreign policy. NED together with IRI and NDI are operational in Sri Lanka.

NED has a budget of over $2million

Why would IRI-NED-NDI be targeting local government authorities, spending on training and using these trainees as a podium to get closer to the citizens?

Why IRI wish to poke its nose into electoral registers of voters in Sri Lanka? What is the information they are picking from these lists and more importantly what do they propose to do with them?

How far is the Sri Lankan Government & its intelligence agencies looking at the deeper ramifications of these ‘interferences’ on the guise of helping ‘democracy’?

Is IRI-NED-NDI registered in Sri Lanka?

Is the Govt monitoring their funding & the funds allocated for their programs against what they claim to have achieved?

What do we know about the Federation of Sri Lankan Local Government Authorities that IRI is working close with & funding it via USAID, UK Govt & Canadian Govt. https://fslga.lk These foreign govts & their fronts are getting direct access to the people and public servants via the FSLGA.

What is the espoused outcome of ‘teaching democracy” for these foreign entities using local NGOs as a means to get close to influence citizens, communities, public servants & even political parties. How far have they influenced people’s lives & in what way & to what agendas?

How oblivious are Sri Lankans to the manner that these entities use this very format to carry out coloured revolutions in other parts of the world influencing election outcomes and brainwashing voters on who to vote for & who not to vote for?

President Bush in 2005 had thanked IRI for its role in American foreign policy helping to create ‘democractic change’ in more than 100 countries by training ‘the next generation of leaders’. Encrypted what does this mean? It means that IRI has triggered influence in over 100 countries to align with US agenda via its ‘harmless’ and ‘innocent’ community efforts.

The manner IRI-NED-NDI-USAID has got close to citizens & communities in particular the youth & women has enabled a series of coloured revolutions to suddenly emerge – Rose, Orange, Purple, Tulip, Cedar, Saffron in Middle East & East Europe and now onwards to Asia where Sri Lanka had its own dosage since early 2022.

It was quick, calculated and backed by diplomatic messages to allow the chaos to continue. What we saw from the attacks to the President’s private residence to what unfolded since May onwards to July in Sri Lanka was nothing drawn out by locals but what locals were individually & collectively tasked to do, making them think that they were the architects when in reality the real brains would have written back home a single sentence ‘mission completed successfully’.

Haiti is one example Sri Lankans will find similarities with.

Kim Ives a journalist with Haiti Progress newspaper was one of the trainees.

Andre Apaid a Haitian politician was one of the leaders of the street demonstrations against Aristide.

Others trained were linked to opposition political parties.

US took side of the demonstrators and found fault with Aristide for not handling the violence. US urged Aristide to step down & leave Haiti.

US sent a plane to take Aristide to Central African Republic.

IRI nurtured opposition figures on how to criticize Chavez.

In April 2002, a group of military officers launched a coup against Chavez. This showed IRI involvement with Venezuelan military.

IRI even issued a statement on 12 April 2002 praising the ‘bravery’ of the military. IRI is alleged to have promoted a false statement that Chavez had resigned though he had not.

Demonstrators, the Presidential guards and segments of the armed forces however, backed Chavez and he returned to power. The coup resulted in 40 deaths.

IRI supported Opposition party of Sam Rainsy linked to US. IRI wrote the speeches, managed the campaign and virtually ruled Cambodia from behind the scenes.

The irony however, is that while entities like IRI-NED-NDI-USAID blatantly interfere in internal affairs of countries denting the credibility of US envoys and missions, some of the leaders of the countries that US agents operate are no saints themselves. It is as a result of poor management of national leaders that allows entities like IRI-NED-NDI-USAID to fish in troubled waters and make the water mirkier by various psyops and false narratives to align with their foreign policy goals.

A weak nation made weak by political leaderships elected to power can be made weaker when mischief makers enter the fray and add to the smoke.

In Sri Lanka, we have to admit that leaders of all political parties have failed to put nation and national agendas first. It is as a result of this failure that subvertive elements enter the fray to create further mayhem and utilize the vulnerable situation to their advantage. The tide can be reversed only if leaders come up with a strong national plan, mechanisms that win the confidence of the people and strategies to deal with subvertive elements at play. The lack of such or when leaders are dependent on the subversive elements for their political survival confounds the situation.