RECOUNTING THE LIES – FRANCES HARRISON, THE LTTE AND SRI LANKA 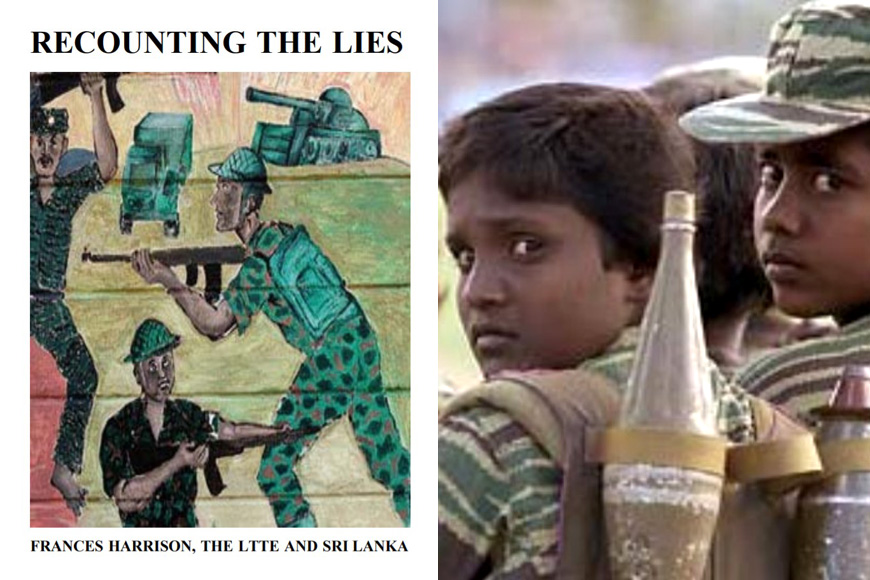 Frances Harrison’s book, Still Counting the Dead: Survivors of Sri Lanka’s Hidden War, is a telling insight into how the western commentocracy continues to distort accounts of the ending of the Sri Lankan civil war in 2009. This war was a long and brutal conflict fought between the Government of Sri Lanka and a terrorist movement which called itself the “Liberation Tigers of Tamil Eelam” (LTTE, also known as the “Tamil Tigers”). The book will be welcomed by the caffè latte drinking, Channel 4-viewing, Hampstead set. Harrison will doubtless be gently back-slapped by her colleagues in the journalism and human rights industry, and will appear on numerous television and radio shows to discuss it.

Regrettably, in articulating this narrative, Harrison’s book omits key facts, offers convenient half-truths and contains blatant falsehoods. The reality is that in doing so her book may well prolong any final resolution of the conflict by artificially sustaining a flimsy narrative that only serves the interests of members and fellow travellers of one of the world’s most ruthless terrorist movements. The contents, claims and conclusions are so mired in propaganda as to be unusable to anyone looking for an objective and accurate account of the events at the end of the war.

The book comprises a series of interviews with ten Sri Lankan Tamils, all of whom, with one or two possible exceptions, are intimately linked with the LTTE. Unsurprisingly perhaps, the interviews dovetail with what can be termed the “Channel 4 Narrative”, a version of events broadcast by Channel 4 television in 2011 and 2012. This projects an omnipresent Sri Lankan security state which established and then deliberately ignored civilian “no fire zones” in the last few months of the war, and in so doing killed thousands of Tamil civilians. This narrative, while conceding that the LTTE may have conscripted children to fight in its ranks, and may have shot at the occasional Tamil civilian, generally soft-peddles the atrocious nature of the LTTE, preferring to ignore the organisation’s catalogue of war crimes and crimes against humanity.

It is this human rights-lite approach by Harrison which provides a good introduction to the contradictions that mar her book. It is important to remind ourselves of what the LTTE was and how it behaved. In her acknowledgements in the book Harrison thanks Professor Daya Somasundaram, whom she describes as “Sri Lanka’s leading expert on war trauma”, for his valuable insights. Somasundaram described the control exercised by the LTTE within the areas it dominated in Sri Lanka: “[T]he LTTE maintained a fascist, totalitarian control over the civilian population with a network of prisons for dissidents and enemies who were killed or tortured and a strict pass system that did not allow people under their control to leave.” The University Teachers for Human Rights (UTHR) echoed this analysis of the LTTE, similarly pointing to “its fascist structures and lines of control”. (Another of Harrison’s mentors, Gordon Weiss, himself the author of an anti-government tract, describes UTHR as an “independent” and “highly regarded civil society organisation” ). Walter Laqueur, the editor of the Penguin Reader’s Guide to Fascism, a standard text on the subject, described the LTTE as “preaching a fanaticism and a ruthlessness that in Europe could be found only in the fascist movements of the 1930s.” The Economist described the LTTE leader Velupillai Prabakharan simply as “a textbook fascist”. This inconvenient reality is missing from Harrison’s book.

Weiss fleshes out the LTTE’s “record of appalling violence”. He records that the LTTE chief Prabakharan gave orders “to bomb buses full of women and children…murder monks and kill prisoners”, and that “[t]hey hacked, bludgeoned, shot, burned and hanged civilians in a long series of massacres…Children were slaughtered alongside the elderly in dozens of small-scale incidents.” Many of these murders were racist in nature and part of the LTTE’s policy of systematic ethnic cleansing. The LTTE “planted bombs on trains, aircraft and buses…In 1987, a car bomb exploded in Colombo’s Pettah, killing 113 civilians. In 1996, four briefcase bombs exploded simultaneously on a train, killing sixty-four passengers and wounding more than 400 others. In 2006, a roadside blast killed sixty civilians on a bus in Kebithigollewa.” Weiss also points out that between 1983 and May 2009: “there were around 200 individual Tiger attacks on civilian targets, in which between 3,700 and 4,100 civilians were killed.” Weiss also notes that “This figure does not include the number of Tamils allegedly killed by the Tigers in the areas they controlled, nor the many hundreds of prisoners thought to have been killed in Tamil Tiger gulags. The University Teachers for Human Rights estimates that the latter figure is as high as 7,000.” Weiss also confirms that the LTTE “systematised the use of suicide bombers…and child soldiers.” And, in the last months of the war, the LTTE forcibly displaced hundreds of thousands of civilians, incarcerating them in what would become a vast, mobile, open air concentration camp, shooting or beating to death any of its inmates that tried to escape. The LTTE, and its members military and political, were intimately associated with war crimes and crimes against humanity.