Rave at Wembley while world self-flagellates over Covid 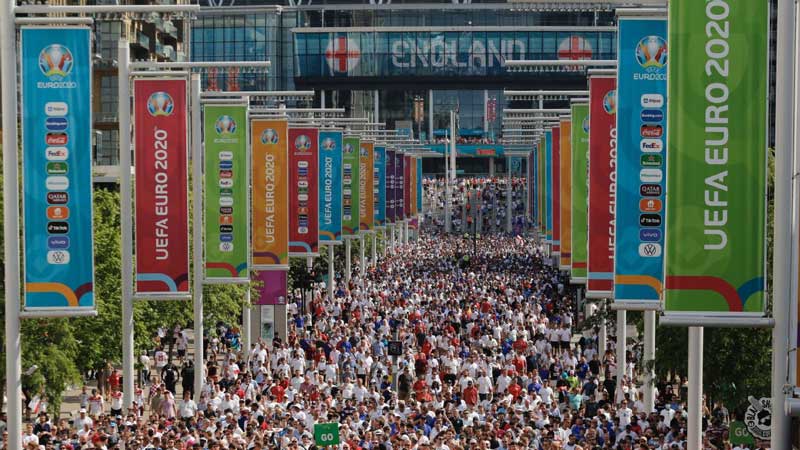 Over 60,000 people packed the Wembley Stadium in London, England, for the European Cup 2020 final football game last week between England and Italy and there was no social distancing, quite obviously, in these circumstances. There was no masking either.

Just have a look at the photographs. In Sri Lanka, we are still, it seems, afraid to play the historic Royal–Thomian cricket match, even without spectators. Be that as it may, the Wembley Stadium melee was something else.

It gives an indication of the switch-on and switch-off nature of the Covid pandemic. The UK is still not fully opened up. But there is this massive baying crowd for the European Cup finals at the Wembley Stadium, and it is a sight to behold.

As if that was not enough, there are videos doing the rounds of hooligans (soccer fans) going berserk and punching other fans at the stadium exits. Many ticketless fans also entered the stadium from the disabled entrances, in the chaos that ensued.

There is what could be called a full-on rave atmosphere. There is alcohol flowing and people are gathered in milling crowds at the stadium and various other locations too, where the match was screened for viewers. Nobody is masked, and hooligans pounce on anyone they can catch hold of.

Meanwhile British Premier Boris Johnson says it is all fine and everything happened under carefully controlled conditions. (All the ticketed fans at Wembley were supposed to have been vaccinated).

Sublime to the ridiculous

But this was the tip of the iceberg. These crowd scenes were the pattern during the Euro Cup semi-finals as well, and for good measure things went from the sublime to the ridiculous when England put their ‘yobs’ on display for the whole world to see at the finals, which England lost. Thousands of fans stormed the stadium and the police seemed to pretend they were not expecting any of it. How could they, with such “carefully controlled conditions?” Boris Johnson – why the man is absolutely a control freak, he is.

This behaviour at Wembley cannot be due to the vaccines as the UK is still only 52 percent fully vaccinated. The country is 68 percent partially vaccinated and anyway officially Britain is still under lockdown at least at the time of writing, with the country opening up fully by July 19 (‘Freedom Day’). With lockdowns like these with rave parties with milling crowds within kissing distance of each other, who needs to open up? In any event, Johnson had to spend ‘Freedom Day’ in self-isolation, being a first contact of Health Secretary Sajid Javid who contracted Covid the other day.

The issue that should be raised is not the feasibility of having these football raves at Wembley. The real issue is the farcicality of the Covid fears and what the world has been made to believe about Covid. Does anyone think that the UK authorities are so completely daft as to allow these types of raves if there was a plague that is so dangerous that it is an imminent threat to their people?

On June 3, 2021, the UK added Sri Lanka to their ‘Red List’, and no Sri Lankan is allowed to enter the UK as a result. This is while the so-called Delta variant is already supposed to be running rampant in that country. “The COVID-19 pandemic is not taking a break tonight. The COVID-19 Delta variant will take advantage of unvaccinated people, in crowded settings, unmasked, screaming/shouting/singing,” tweeted Maria Van Kerchove, a World Health Organization epidemiologist expressing her concern apparently about the Wembley final.

The WHO issuing homilies is one thing, but the event shows what a farce the Covid regimens have become, how they are virtually designed to be to the disadvantage of developing countries such as ours.

The WHO expresses concern about the Wembley final, but Boris Johnson knows he can risk this, else you could bet your bottom Dollar and your British Sterling Pound that he would not have allowed these raves. His message to the rest of the world seems to be clear: “We treat these Covid rules as a joke. We lock the sheeple down when it suits us and then we have rave parties with alcohol spilling over and people milling around literally as if it was a rugby scrum.”

Throw in a little bit of football hooliganism and show the world footage of some people being assaulted, and he has his typical British event. Is the rest of Europe complaining? These events such as the Euro Cup finals are beamed far and wide, and there are television audiences all over the European Continent, and the rest of the world too.

Was anyone seen to be complaining? Except the obligatory tweet from the WHO official, there was no censure of the British.

With a mere 52 percent fully vaccinated why is the UK going for rave soccer events with wretched excess by a milling crowd of humans of literally thousands upon thousands, while the UK High Commissioner here congratulates us in this bucolic island for locking down?

If you cannot see the farce behind all of this, you have to be among the walking dead. The Covid protocols are for when they want and where they want, because they know this pandemic has a 2.1 percent global death rate, after all.

The aforementioned Ms. Kerkhove of the WHO has expressed concern that the Wembley event will increase the spread of COVID-19, including the more contagious Delta variant, according to euronews.com.

But no problem, Red List a few visitors from Sri Lanka saying that they are carriers of dangerous variants and have rave football in London with unmasked crowds playing havoc cheek to cheek, throwing alcohol at each other while leering at and assaulting everybody that passes. Nice.

Now, this is not to say Boris Johnson should not have had his moment of rave football action. Who am I to be sanctimonious about it?

This is just to say we get it. The industrialized world knows that these Covid protocols are and were essentially a farce. They do not give a tinkers in Europe if 2.1 percent of their population dies of Covid, as they do in similar numbers everyday from drug overdoses, alcohol abuse and any number of other causes.

They just want to keep up appearances and of course that way they can Red List any country whenever they want, lecture to us when they think we are not controlling Covid – so that we would shut down and ruin our economies.

Then they can lecture to us to go to the IMF to boot, and upbraid us for going to China for our financial needs, and they can keep downgrading us through their ratings agencies and treat us as if we are hopelessly impoverished, so that they could have considerable sway over our economies.

Make no mistake, there was no Europe-wide condemnation of these rave football events, so it is unfair to blame Boris Johnson for all of this. A large part of the industrialized world in Europe was complicit in this, and yet we are locking down at the drop of a hat and ruining our people’s lives and our economies.

Only 40.2 percent of the adult population in the EU has been vaccinated, which means that in those parts they are not significantly heavily vaccinated compared to us, but yet they Red List us and have raves, while we are supposed to lock down and blight our economies and the lives of innocent, ordinary working people?

If our economies are not viable, who do they expect us to come crawling to? To them, of course. There is a football rave at Wembley and all or most of Europe are enablers. But the working men and women of this country, they would have your head on a platter in the name of Covid. Yes, people do die of Covid, but that is no reason to tear ourselves apart. They do not in Europe. They are partying in those places instead. Take note.