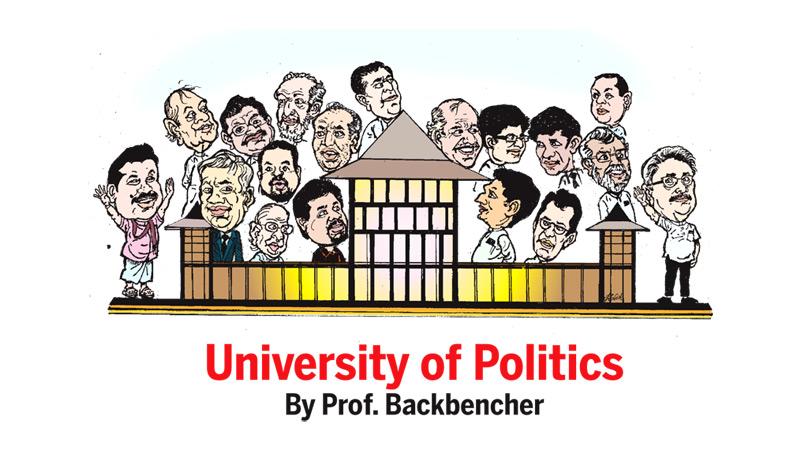 The Minister told Parliament the riot at the Mahara prison was a planned incident and it was not a demand for PCR tests. He said that the rioters may have been under the influence of drugs that are usually prescribed for serious mental diseases. He said the status of our national security is at a satisfactory level. The Minister said if a situation like this occurred while there was no riot in the prison, we would also condemn such action and take legal measures against the perpetrators. However, this incident was a planned one and added that the planning began on November 18 at the Welikada prison.

Minister Weerawansa said though the authorities were able to prevent a riot at the Welikada prison, they failed to prevent it at Mahara. If you look at the video footage of the riot, you would see that the prison inmates are fighting with each other. If they were in a normal psychological condition, would they have fought with each other?

These inmates are using drugs that should be used by patients with mental disorders. He said, “If a normal person uses drugs prescribed for serious mental disorders, that person will not know what happened to him. The inmates’ behaviour was extremely unnatural. Try finding out what happened to the 22,000 types of drugs that were available at the Mahara Prison dispensary.

“This incident was created using long prevailing logistics issues. If someone believes that inmates rioted demanding PCR tests, it is a myth. The inmates who joined the riot were not in a stable mental condition and they cannot even remember what happened to them. If you are saying national security is threatened based on this isolated incident, it is a joke,” the Minister said.

Opposition Leader Sajith Premadasa told Parliament that the recent Mahara Prison riot had erupted as 120 inmates infected with Covid-19 had been taken there from the Welikada prison at the behest of a Director in charge of prisoners’ health who was a Viyathmaga member.

He said, “Many explanations have been given by the Ministers about the riot at the Mahara Prison. One Minister said that there was an invisible hand behind the clashes. Another Government lawmaker said the motive was to bring the Government into disrepute internationally.

“A theory was concocted that prisoners had taken some narcotic tablets called Reverse and they fought because they wanted to see blood. But the truth is otherwise. The real cause is that 120 inmates infected with coronavirus were transferred to Mahara from the Welikada prison at the behest of a director in charge of prisoners’ health.” Premadasa said that Ministers had their own theories, but one day the truth would surface.

Chief Government Whip and Highways Minister Johnston Fernando said that Opposition Leader Sajith Premadasa talked of lofty ideals of prisoners’ welfare but the Yahapalana Government had failed to construct even a single prison to ease the congestion in the prisons.

The Minister who responded to the Opposition Leader’s claim said, “When I was incarcerated by your Government, I was in a cell with 51 other inmates. There was no place to sleep. In the Kegalle prison, they put 225 in a hall enough for 50 inmates. The former Government was pre-occupied with the task of constructing new courts to imprison its political enemies but did not build a single prison for the benefit of inmates.”

Opposition Leader Premadasa who countered Minister Fernando’s claim said, “We did not want to build prisons, we built schools. Mahatma Gandhi once said that when you open a single school, a thousand prisons could be closed. We followed that.”

Minister of Lands S.M. Chandrasena said that it is a shame Opposition Leader Sajith Premadasa has come forward to comment on people such as Shani Abeysekera who even tried to mislead the judiciary. State Minister Piyal Nishantha said that the imprisonment of some innocent people was the result of the political witch-hunt during the former Yahapalana Government.

Minister Chandrasena told a recent media briefing, “We could see how Shani Abeysekera handled former MP Duminda Silva’s case by changing even some of the CCTV footage of the incident. He turned the judiciary upside down by fabricating bogus cases against political opponents. He even produced wrong information to mislead the judiciary. Therefore, Shani Abeysekera is an abhorrent officer.”

Minister Chandrasena said, however, a question arises whether Sajith Premadasa doesn’t have any shame to speak on behalf of this kind of corrupt officer. State Minister Piyal Nishantha said when looking at the incidents that took place during the tenure of the Yahapalana Government, we could see how the law was operated.

The then Health Minister together with some political groups launched a witch-hunt against their political opponents. As a result, some innocent people were found guilty and still in remand custody facing severe hardships. This situation should be completely changed. The former Government levelled baseless allegations against a large number of innocent people who genuinely love the country and its people through their action.

A similar situation should not happen under the present Government. Justice should be meted out to those who have faced injustice. If innocent people have been imprisoned without any valid reason, they should be pardoned irrespective of their political affiliations. This mistake should be rectified with immediate effect.

Minister of Public Security, Rear Admiral (Retd) Sarath Weerasekera told the Parliament the failure on the part of the authorities concerned to proscribe the Tamil National Alliance (TNA) after the end of the war against terrorists is a mistake since its MPs are now encouraging the resurgence of LTTE.

He said, “The ‘Nazi Party’ ceased to exist after the defeat of Hitler and so did Khmer Rouge in Cambodia when Pol Pot was killed. However, the TNA which is the political arm of the LTTE did not cease to exist after Prabhakaran was killed and this was a mistake. TNA MPs who promote extremism should be responsible if LTTE emerges again.”

Minister Weerasekera said political leaders should get the credit of the war victory as per the global norm. “It was considered UK Prime Minister Winston Churchill was given the credit initially while the military leaders were given the credit later. There cannot be a war without politics. The Minister said there are no middlemen in a terrorist war. Either you are a terrorist or not. There cannot be a middleman in a war,” he said.

A group of Samagi Jana Balawegaya (SJB) Parliamentarians led by MP Harin Fernando visited the Mahara prison a few days ago as part of a fact-finding mission on the recent unrest. However, the group of SJB MPs was not allowed to enter the prison premises. Therefore, the MPs who were dressed in personal protective equipment (PPE) engaged in a discussion with prison officials outside the prison premises.

The Samagi Jana Balawegaya (SJB) and Jathika Jana Balaya (JJB) stressed in Parliament that it was the duty of the Government to safeguard inmates in prisons. The Opposition lawmakers also called for a proper independent investigation on the riot in Mahara prison.

After assuming duties, State Minister of Prison Management and Prisoners’ Rehabilitation, Lohan Ratwatte made an emergency observation visit to the Mahara Prison complex on Wednesday, December 2. Following the visit, the newly appointed State Minister had instructed officials to renovate and restore the property and buildings that were destroyed during the recent prison riot. State Minister Ratwatte further, stressed on the need to prevent the recurrence of such events. He also met the inmates and inquired about the problems faced by them.

State Minister Arundika Fernando said that former Prime Minister Ranil Wickremesinghe influenced the judiciary through MP Ranjan Ramanayake during the Yahapalanaya Government. He told the media at the SLPP headquarters recently, “We saw how the law operated during the Yahapalana regime.” He said former MP Duminda Silva’s case was a classic example. The former Government formed an institution named FCID to take revenge from their political opponents.

Former FCID chief DIG Ravi Waidyalankara should be held responsible for the activities carried out by the FCID. At Temple Trees, it was decided by Ranil Wickremesinghe, Patali Champika Ranawaka, Rajitha Senaratne and Anura Kumara Dissanayake as to who should be taken next to the FCID either Namal Rajapaksa, Shiranthi Rajapaksa, Gotabaya Rajapaksa, Basil Rajapaksa or Johnston Fernando. State Minister Fernando said those who were taken to custody through bogus complaints made by the former Government should be released with immediate effect.

Political sources confirmed the filling of the UNP National List slot is likely to be further delayed due to the recent resignation of party General Secretary Akila Viraj Kariyawasam. According to the UNP Constitution, the appointment of the General Secretary is solely the prerogative of the leader contrary to the belief that it required Working Committee approval.

It is the party General Secretary who is constitutionally authorised to notify the Election Commission of the appointment of National List members. Therefore, the recent resignation of UNP General Secretary Kariyawasam has caused an additional issue within the party. Earlier, former Minister Kariyawasam told the media that he would continue to work with the party regardless of his resignation. There was media speculation that former Minister Arjuna Ranatunga had recently recommended UNP Leader Ranil Wickremesinghe as their best option to fill the vacant National List seat after the resignation of party General Secretary Kariyawasam.

Commemoration of terrorists cannot be allowed

SJB Parliamentarian Field Marshal Sarath Fonseka said the Mahaviru commemoration cannot be allowed to take place as the LTTE is a banned organisation locally and in many other countries. Speaking during the debate on the Defence in Parliament, Field Marshal Fonseka said even in Wembley, UK when a cut-out of Prabhakaran had been erected, the Counter Terrorism Command Special Operations Branch had removed it.

“Even these countries don’t allow such terrorism-related activities. We have no animosity with the Tamils or Muslims, but we are of the view that separatism cannot be allowed and the country cannot be divided.” He said that no civilians were killed in the North by the military but the LTTE had used civilians in their front line bunkers.

“Internationally, it is claimed by the LTTE sympathisers that 40,000 civilians were massacred and that is not true. I admit that perhaps around 5,000-6,000 may have been killed as the LTTE used civilians to fight. Instead, we saved the lives of thousands of civilians and we even rehabilitated 12,000 ex-LTTE combatants. He said that the country cannot rest thinking that the war is over as the flames of separatism and terrorism are still active, as certain incidents can be seen taking place from time to time.

Archbishop of Colombo, Malcolm Cardinal Ranjith said that if the present Government fails to punish those responsible for the Easter attacks, an alternative course of action will have to be sought.

The Cardinal made this statement when SJB Parliamentarian Kavinda Jayawardena called on him on Thursday, December 3. The Cardinal said the Catholic community has been waiting to see when the truth behind the Easter Sunday attacks will finally be revealed.

He said, “Although numerous suspects have been in custody, we are still in the dark whether their facts are being analysed or not. It has been very clear to us that the questions during these sessions of the Presidential Commission of Inquiry probing the Easter Sunday terror attacks have only focused on determining the responsibility among political figures and security officials who carried out investigations.

“In comparison, it has not focused on the bombers and those who gave them support and funds so that we are in no way satisfied or confident that a proper investigation has been carried out.” “This must not be swept under the carpet like before due to political machinations or deals. If that happens, then we will have no choice but to seek an alternative. If our trust in this Government is shattered, we will have to depend on someone else to take on this responsibility,” he said.