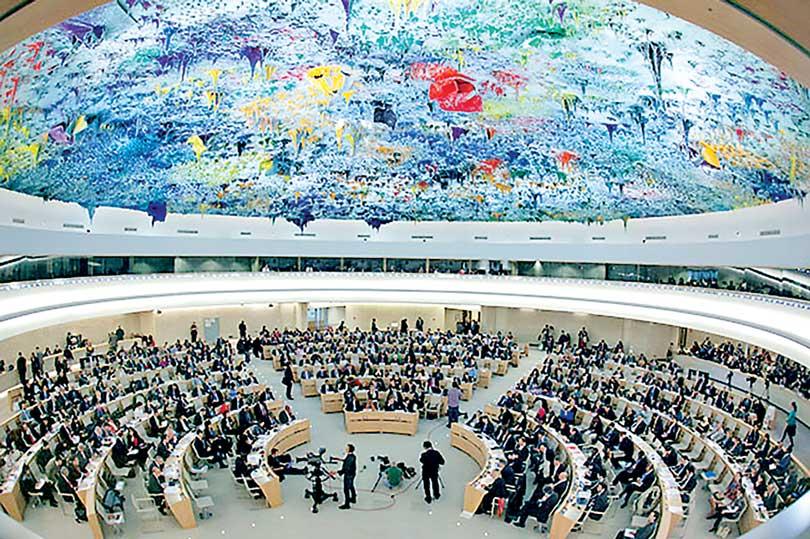 It comes as no surprise that a draft resolution against Sri Lanka – to be moved   by a ‘Core Group’ of five states at the 46th session of the Human Rights Council (HRC) in Geneva – reproduces in concentrated form, key elements of UN rights chief Michelle Bachelet’s Report on this country. They are both part of the same project that has been in the making for some time. That is, to use Sri Lanka as a test case, to entrench and to ‘mainstream’ the pernicious doctrine of R2P (‘Responsibility to Protect’) – atool that rich and powerful nations mayapply, selectively and at their will, to dominate the world. This is where the high commissioner’s call toset out a plan “to advance accountability options at the international level”comes from. It brings in its wake calls for targeted sanctions (based on mere allegations), referral to the International Criminal Court, prosecutions through universal jurisdiction etc.

There are two distinct threads that run through both the Report of OHCHR (Office of the High Commissioner for Human Rights) and the current version of the draft Resolution on Sri Lanka. One is that of ‘digging up past violations.’  The other is that of using ‘past violations’ and alleged ‘present warning signs’ as a basis for implementing a ‘preventive agenda.’ The question of ‘How far back in the past?’ is not addressed. This would be owing to the inconvenient fact that it will dig up along andwell-documented history of colonial/ neo-imperialist exploitation, plunder and murderous war-mongering against weaker states by the powerful–who are behind this resolution and its precursors. The US, though it is not a current member of the rights body, was the main architect of the resolution process against Sri Lanka. It seeks re-election next year.

The high commissioner’s appeal to ‘not allow a precedent’ is ironic. Is it not the Report, and the related Resolution, that in fact seek to ‘set a precedent’ – paving the way for the Council’s interference in the affairs of member states

According to the Conclusions of the Report, “… trends highlighted in this report represent yet again an important challenge for the United Nations, … in terms of its PREVENTION FUNCTION” (emphasis added). Referring to a prevention ‘agenda,’ it says “The international community must not repeat those mistakes, nor allow a precedent that would undermine its efforts to prevent and achieve accountability for grave violations IN OTHER CONTEXTS’ (emphasis added). This makes it clear that the Report and the Resolution are intended to pave the way for ‘preventive measures’ (read R2P) to be applied in undefined circumstances IN THE FUTURE.  In other words this is a rhetorical exercise, with motives that have little to do with the professed aim of seeing justice done for victims of human rights violations.

The high commissioner’s appeal to ‘not allow a precedent’ is ironic. Is it not the Report, and the related Resolution, that in fact seek to ‘set a precedent’ – paving the way for the Council’s interference in the affairs of member states, in violation of the UN Charter?

Preambular Paragraph 3 (PP3) of the Resolution refers to the HRC’s ‘commitment to the sovereignty, independence, unity, and territorial integrity of Sri Lanka.’But the same draft abandons this ‘commitment’ in Operative Paragraph 6 (OP-6) which “decides to strengthen the capacity” of the OHCHR to collect and preserve evidence to support prosecutions through universal jurisdiction in member states. This hints at interference of the most objectionable kind, in domestic affairs of the state.

The rights Chief’s Report contains many inaccuracies and misrepresentations relating to Sri Lanka’s 30-year conflict, as it draws on the flawed UN Secretary General’s Panel of Experts report of 2011, and the biased report of the OHCHR Investigation on Sri Lanka (OISL report) of 2015, as its sources. It studiously ignores the formidable body of evidence that contradicts the war-crimes narrative based on these reports.

For example, the high commissioner alleges ‘indiscriminate shelling’ by security forces that resulted in ‘massive civilian deaths and casualties’ in the last stages of the war (page 4). There are dispatches from the diplomatic missions of the very states that lead the resolutions against Sri Lanka, as well as other independent, authoritative reports, to show that this claim is not true. They have been ‘disappeared’ in the OHCHR, along with Sri Lanka’s 30-page response, rejecting the Report.

To justify advocating a ‘preventive’ (R2P) agenda, the high commissioner is obliged to portray Sri Lanka’s “current trajectory” as one that “sets the scene for the recurrence of the policies and practices that gave rise to grave human rights violations” (page 14).OP-7 of the Resolution,painting a dire picture of the present, uses almost identical language. This pictureis buttressed by statements of the US and UK. It’s worth noting that the UK hypocritically cosponsors a resolution targeting Sri Lanka’s armed forces, even as it seeks to introduce a new law to protect its own military from prosecution for alleged crimes committed abroad (notably in Iraq and Afghanistan).
US Secretary of State Antony Blinken, speaking at the high-level segment, lumped Sri Lanka together with Syria and South Sudan, as being among the ‘issues of concern around the world’ in need of the Council’s attention. Diplomatic missions of those, among the Core Group, which have representation in Colombo, cannot be unaware that there is nothing in the Sri Lankan situation, that anticipates anything comparable to the violence and lawlessness that prevails in those states. (The Core Group comprises UK, Germany, Canada, North Macedonia, Montenegro and Malawi). One only has to read the travel advisories on Syria and South Sudan, issued by the US government, to understand how false these insinuations about Sri Lanka are.

The most cogent arguments against R2P have come from America’s foremost public intellectual Noam Chomsky, in an address to the UN General Assembly Thematic Dialogue on R2P in 2009.  Chomsky said “The discussions about Responsibility to Protect (R2P), or its cousin “humanitarian intervention,” are regularly disturbed by the rattling of a skeleton in the closet: history, to the present moment.”He observed “It is understandable that the powerful should prefer to declare that we should forget history and look forward. For the weak, it is not a wise choice.”

Chomsky went on to cite several examples to illustrate his point. In the Corfu Channel case, considered by the International Court of Justice 60 years ago, the court determined that it “can only regard the alleged right of intervention as the manifestation of a policy of force, such as has, in the past, given rise to most serious abuses and such as cannot … find a place in international law.  …; from the nature of things, [intervention] would be reserved for the most powerful states, and might easily lead to perverting the administration of justice itself.”
Chomsky noted that the declaration of the South Summit of 133 states held in April 2000 “surely with the bombing of Serbia in mind, rejected the so-called ‘right’ of humanitarian interventionwhich has no legal basis in the United Nations Charter or in the general principles of international law.”He said its wording reaffirmed the important UN Declaration on Friendly relations (UNGA Res. 2625, 1970).  It has been repeated (among others) by the Non-aligned Movement’s Ministerial Meeting in Malaysia 2006,“again representing the traditional victims in Asia, Africa, Latin America, and the Arab world,” he said.

While there may be amendments to the draft Sri Lanka resolution in the days ahead, it would be safe to assume its main thrust will remain intact. The US will no doubt use its diplomatic muscle to swing the votes of small states. In an unusual contest for the Council’s presidency this year, Fiji, said to be Western nations’ favourite, won, after what media reports described as a ‘fierce geopolitical battle.’The US in recent years entered into defence-related agreements with Gabon, which made an ambivalent statement at the Interactive Dialogue, and Malawi, which recently joined the Core Group, thereby diluting its NATO-related composition.

The outcome of the vote remains a toss-up at this point. The vindictive thrust of the OHCHR’s ongoing Sri Lanka project, far from promoting ‘accountability, reconciliation and human rights’ is, on the contrary, likely to exacerbate divisions, making it the biggest obstacle to resolving ethnic tensions. The upcoming HRC Resolution needs to be defeated, as it poses a threat not only to Sri Lanka, but to all developing countries of the global South.