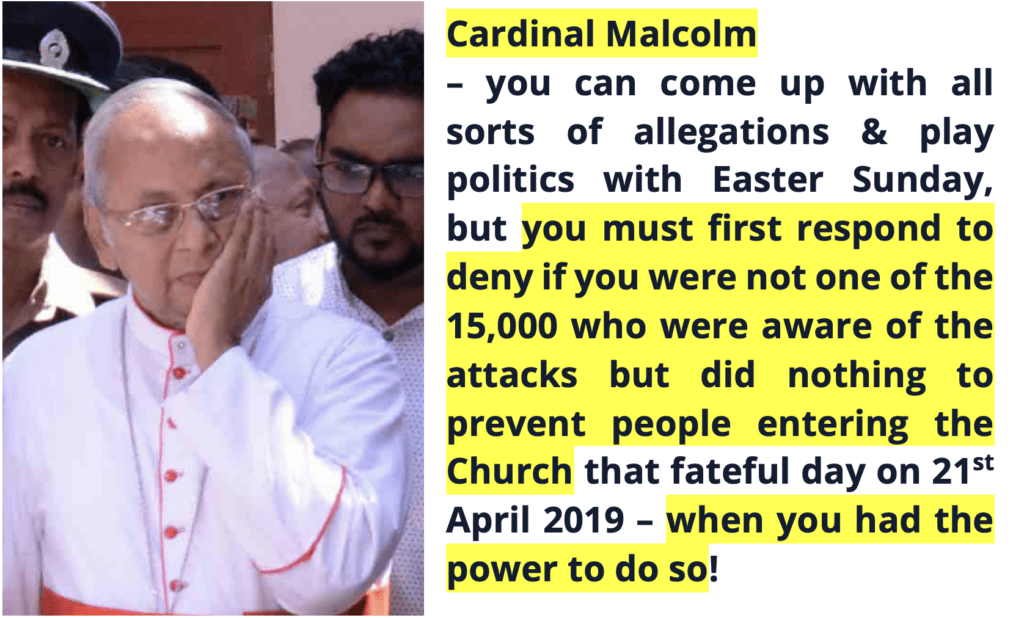 Cardinal Malcom – Are you aware that within the course of 3 years the AG’s dept is to file charges against 79. Did such happen to the victims of LTTE over 30 years of LTTE terror?

Cardinal Malcolm – have you questioned the yahapalana government during whose watch this attack took place & questioned why they neglected national security. Is there a reason why you are not going after the govt in power who was responsible for security when foreign intel had informed them 97 times of an impending attack?

Cardinal Malcolm – Then PM Ranil Wickremasinghe informed on 22 April 2019 (day after the Easter Sunday bombings) that the Govt was aware of the attacks. Why has he not been questioned?

Cardinal Malcolm – on 23 April 2019 President Sirisena admitted lapses in Easter Sunday attacks, what was your response?

Cardinal Malcolm – PM Ranil Wickremasinghe declared in a SKY news interview on 26 April 2019 that joining foreign terrorist groups was not against Sri Lankan law. What was your response to this?

Cardinal Malcolm – PM Ranil on 27th April 2019 apologized for failing to prevent Easter Sunday attacks, what was your response?

Cardinal Malcolm – Did you ask the yahapalana govt why they ignored 97 foreign intel warnings?

Cardinal Malcolm – why did the 8 Islamic extremist suicide bombers choose churches as targets?

Cardinal Malcolm – did you ask the foreign intel teams that arrived immediately after the attacks (FBI, UK Counter Terrorism Police, Interpol) what their investigations revealed since they took away parts of the evidence used by the attacks? How come you omit to question them?

Cardinal Malcolm – have you tried to find out if National Thowheed Jamaath is connected to foreign countries & their intel & if they were also involved in the Easter Sunday attacks? How come you are avoiding asking this?

Cardinal Malcolm – have you forgotten the swords found in mosques & homes? Have you asked the Muslim clergy why these swords, detonators and even large numbers of clothes were found hidden all-round the island? Is there a reason why you are not asking this?

Cardinal Malcolm – Former SIS head Nilantha Jayawardena says even diplomats knew about the attacks. Did you inquire what diplomats & did you ask the diplomats?

Cardinal Malcolm – Former SIS head Nilantha Jayawardena says Harin Fernando knew of the attacks. Did you inquire from Harin Fernando why he didn’t inform you?

Cardinal Malcolm – have you looked into the 2 US Govt employees who were detected at Hilton Jaic after sniffer dogs found 6 boxes explosives in the apartment on 30 July 2019 & they refused to allow the boxes to be scanned. These boxes had been put into a US embassy vehicle & taken away. Did you look into this?

Cardinal Malcolm – did you not think it strange why the US envoy Teplitz would say that US had ‘no prior knowledge’ of attacks would suddenly say on 24 April 2019 that more attacks may happen? Did you question the US embassy on why they did not have prior intel or why Indian intel kept it secret from US intel?

Cardinal Malcolm – what are your views on ISIS who took responsibility for Easter Sunday attacks & even released pictures of the suicide bombers? When ISIS has taken responsibility with a public announcement, what makes you think it is not them?

Cardinal Malcolm – Have you wondered why Bathurdeens’ brother who was deported from Dubai & arrested by CCD on 25th April 2019? Have you looked into what his connection was with the suicide bombers? What have you found?

Cardinal Malcolm – are you also following up on the arrest of Bathurdeen’s coordinating secretary Moh.Zanus on 30 April 2019 Chairman of the Mantai West Cooperative Society.

Cardinal Malcom – are you also following up on Alahudeen – uncle of Bathurdeen who is also the ACMC Treasurer. Alahudeen’s daughter was married to suicide bomber Ilham. She died in the Dematagoda house blast.

Cardinal Malcolm – have you questioned the Negombo Deputy Major who was arrested possessing a sword, dagger & 37 mobile phone batteries?

Cardinal Malcolm – did you look into Chandrika Bandaranaike’s statement on 28 April 2019 that Arabic & Madrassas schools are teaching extremism. Did you ask her for evidence or get the authorities to look into this & see how many of them are legal & registered?

Cardinal Malcolm – did you not wonder why MP Kadar Masthan would call for a general amnesty for the suspects on 10 May 2019?

Cardinal Malcolm – did you wonder why Moh. Nawshad former Wattala-Mahabage Municipal Chairman who was a member of NTJ would flee Sri Lanka on 29 April 2019 – have you demanded his arrest?

Cardinal Malcolm – are you following up on MP Dayasiri Jayasekera’s allegation on 29 April 2019 that Muslim Affairs Minister Haleem allowed 400 NTJ mosques to be constructed & who was funding them.

Cardinal Malcolm – are you also following up on arrest of Kotte Municipal Councillor H M Ali Usman & brother Raja Mohideen Sultan who were all arrested with 3 swords & a knife.

Cardinal Malcolm – why did Rev. Siril claim on 23 Oct 2021 that the main suicide bomber Zahran Hashim leader of NTJ was given monetary & other support by Sri Lanka’s intel agencies & present head of SIS had links to Zaharan & followers?

Cardinal Malcolm – Rev Siril in March 2021 says the Church is not convinced the Govt was on the ‘right track’ to identify Easter Sunday architects – what is the track Rev Siril wants the Govt to take?

Cardinal Malcolm – Rev Siril in August 2021 says you are mooting ‘international assistance’ did you & he forget that foreign intel was helping investigations & even took away most of the evidence. Have you both questioned these foreign intel agencies?

Cardinal Malcolm – don’t you find it strange that the same people demanding accountability are demanding release of suspects that are arrested? This is no different to the Church campaigning to release protestors who have been unruly.

Cardinal Malcolm – you head the Church, not the Govt or the Intel/Police or the AG’s dept. You don’t make the arrests – they do. You can’t file charges – the AG’s dept does. You can’t demand people to be released while demanding justice.

Cardinal Malcolm – you demand justice for Easter Sunday, what about the justice for LTTE victims? Would you allow the Govt to conduct investigations into the role of Church links to LTTE? Would you allow action against Church fathers who supported LTTE even running child soldier orphanages & transporting arms in their vehicles?

Cardinal Malcolm now we come to the most difficult questions

Cardinal Malcolm – former SIS head Nilantha Jayawardena says at least 15,000 people knew of an attack on Easter Sunday which included members of Parliament & Diplomatic missions – have you probed who in Parliament knew, who among the diplomatic missions knew and why none of them did not tell you. After Nilantha Jayawardena’s revelation we have just 2 questions – did they tell you or didn’t they tell you? If they did, Cardinal Malcolm you must stand on the dock and answer some serious questions!

Harin Fernando’s testimony to the Presidential Commission of Inquiry on 16 September 2020 corroborates with former SIS head who said that 15,000 people would have known about the attacks before the attacks.

How come you, Cardinal Malcolm was not one of this 15,000 people who knew of an impending attack?

Cardinal Malcolm – MP Harin Fernando is a staunch Catholic. His father Nihal Fernando who was in hospital told him days before Easter Sunday not to go to Church because of a likely attack – did Harin Fernando tell you of an attack or like how his father got to know, did you & the Catholic Clergy were informed too? Harin Fernando’s father had been informed by Sergeant Nandalal of CID team that visited Pasikudah to arrest Zaharan’s team member ‘army Mohideen’ to recover explosives in Wanathawilluwa.

Cardinal Malcolm – After the attacks Harin Fernando had tweeted that IGP had sent an alert by his Deputy Priyalal Dissanayake dated 11 April 2019 regarding Indian intel warnings. These warnings were reissued 2 days before attack & 2 hours before 1st suicide mission on St. Anthony;s Church. Have you questioned Harin Fernando regarding his knowledge of an attack before the attacks?

Cardinal Malcolm – Harin Fernando claims to have visited Temple Trees before the attacks & shown PM Ranil a letter sent to police officials regarding an impending attack. Don’t you find it odd, that a staunch Catholic like Harin Fernando would visit PM Ranil to show letter but not visit you? Why didn’t he visit you? Did you ask Harin Fernando why he didn’t inform you or show you that letter?

There are some startling revelations in this article. Do you deny what is being implied?

Cardinal Malcolm – As per Harin Fernando’s statement to the Commission he insinuates that the Church was aware of the attacks and that was reason why no public mass was held on the morning of 21 April 2019.

Cardinal Malcolm – Why did 3 auxiliary Bishops Maxwell Silva, Anton Ranjith & J D Anthony Jayakody issue a statement attempting to deny the insinuation by Harin Fernando – this is what they have written

“Cardinal has indeed presided over the solemn celebration of the Easter Vigil service at midnight on Saturday 20thApril 2019 which followed with the Easter Sunday festive mass at St. Lucia’s Cathedral, Colombo 13 ending in the early hours on Sunday morning” (21/4/2019)

St. Anthony’s Church is a Shrine

St. Lucia’s is a Cathedral.

Thus the statement of the 3 Bishops doesn’t negate what Harin Fernando insinuated that mass was not held at St. Anthony’s Church.

Cardinal Malcolm – why did the 3 Bishops attempt to negate Harin Fernando’s insinuation when neither midnight mass nor morning mass was held at St. Anthony’s Church?

Cardinal Malcolm – Is it also not correct that after the early morning mass at St. Lucia’s Cathedral you held a Holy Mass at the Archbishops House & it was only after the news of the attacks that you rushed to the scene? (to arrive from Archbishops House in Colombo 7 to St. Anthonys Church in Colombo 13 – it taks a good 20 minutes)

Cardinal Malcolm – if you were holding a Mass at the Archbishops House in the morning prior to the attacks, doesn’t it mean you had no program to hold mass that morning at St. Anthony’s Church when the attacks happened?

We are a bit confused Cardinal – if you can shower love & forgiveness to the men that caused the deaths of 279 innocent people, why are you going behind a “conspiracy” without proof but accusing all & sundry when it suits you?

Wasn’t this why Harin Fernando himself claimed the Catholic Church was engaged in politics in June 2020, three months before he gave a statement to the Inquiry.

If 97 intel warnings reached at least 15,000 people, it is baffling that yourself & the Church would not have been warned as well. Whether Cardinal or the Church knew but are pretending to have not known lies on their conscience. But the one’s that knew & didn’t do anything to prevent harm to people of the venues that were named are morally culpable for the deaths of 279 people & lifelong injuries to others & grieving families. No amount of pointing fingers can erase this guilt. Their conscience will prick them to their dying days of knowing but choosing not to do anything to prevent it.

Whenever we receive the slightest rumor even of a traffic block, we inform our friends and family not to use that route – it is strange that 97 intel warnings & 15,000 knowing of an attack would not even stop people entering Churches or informing hotel security to increase surveillance. During LTTE heyday apart from one incident to Hotel Oberoi – even LTTE failed to attack major hotels in the capital.

Cardinal Malcolm – you can come up with all sorts of allegations & play politics with Easter Sunday, but you must first respond to deny if you were not one of the 15,000 who were aware of the attacks but did nothing to prevent people entering the Church that fateful day on 21st April 2019 – when you had the power to do so! The country is facing political and economic issues – we do not need to add religious politics to it too.