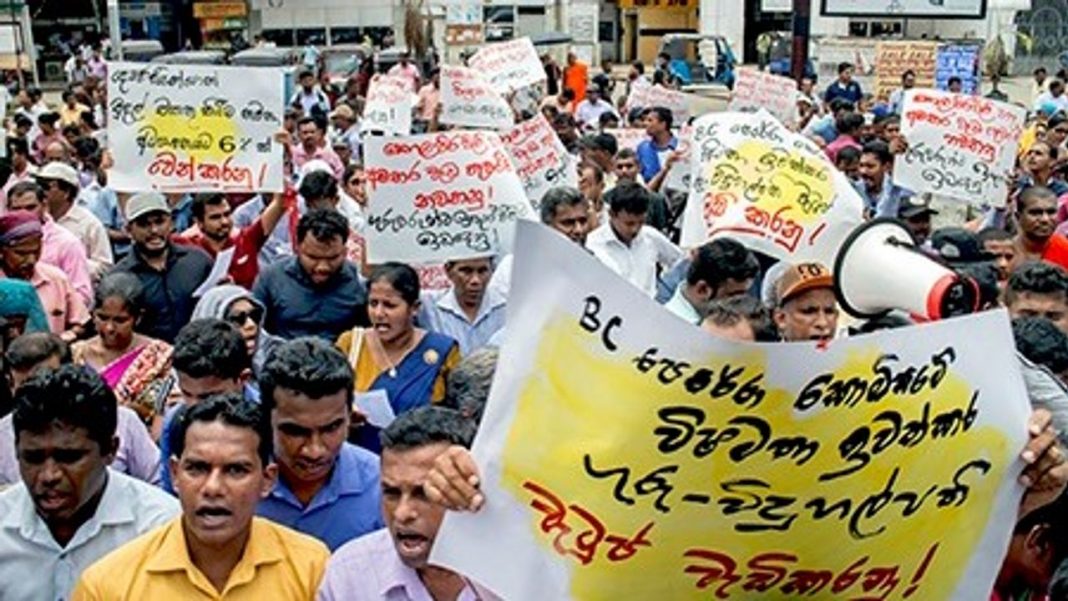 Dean Koontz, the renowned American author in his book ‘Deeply Odd’ stated, “The world howls for social justice, but when it comes to social responsibility, you sometimes can’t even hear crickets chirping”. The ongoing wave of public protests at a time when the entire country is suffering from treacherous Covid-19, is a classic example of gross disregard for personal social responsibility.

As of the time this article is being compiled, several public protests were being carried out by various organisations. The largest and most coercive of all is the protest campaign conducted by teacher-principal trade unions on several demands, mainly on salary anomalies. According to them, the issue had not been solved during the past twenty-four years by any of the Governments in power.

The majority of the citizenry agree that the teachers and principals have encountered this genuine issue for a prolonged period. However, they opine that now is not the best time for a trade union action as a more pressing issue prevails in the country with a raging increase of Covid-19 cases.

There is no argument that the right to protest is one of the most important fundamentals in a Democracy. Yet, in this writer’s opinion, the social responsibility of a citizen of a country supersedes all other criteria in a national crisis such as the ongoing health catastrophe. Time and again, the health authorities warned that the threat of Covi-19 is far from over, and ignoring the consequences of such threat can be devastating to the whole country.

The constant plea from the health experts was to fall in line with health guidelines, now common knowledge. The electronic and social media reveals that thousands of them flock together grossly disregarding the danger of contamination. Video clips by news channels reveal that many of them not even wearing face masks correctly. They not only expose themselves to harm but also others near and dear to them.

Although it is evident that the vast majority out of nearly 236,000 teaching fraternities is supporting the move, there is also a strong allegation that the protests are being continued on the auspices of opposition political parties to discredit the Government.

The Government’s stance is that although they recognise that the demands are reasonable, due to the prevailing gruesome cash crunch of the country they cannot allocate a staggering amount of Rs 67.8 billion at this time. The teacher-principal unions have rejected all proposals put forward by the Government.

The public opinion was somewhat favourable to these protests at the early stage of the protest where the law enforcement made a blunder by arresting protesters and sending them for quarantine. In the first phase, even with the issue of online education, the general public tolerated the move with the belief that the protest would stop when the arrested were released.

However, the campaign continued with renewed demands, of which some are not justifiable at this juncture. The key point to the public wrath was the grossly irresponsible and sloppy behaviour they display openly at demonstrations, especially, when the country is on the verge of a possible fourth wave with much-enhanced infection rapidity Delta variant. According to health authorities, the spread of the Delta variant is a few times more severe than any of the previous variants.

Despite warnings by the health fraternity, teachers and principals keep protesting through massive crowd gatherings all over the country, without a shred of concern for public safety. The public rage against the antisocial act of these factions seems to escalate and it is not long that they will react extremely adversely on protestors.

Students against another university

Apart from teachers’ unions, university students, university lecturers, unemployed graduates, and other opportunistic political fortune seekers instigated and influenced by opposition political parties have initiated a separate protest campaign against the proposed Kotelawala Defense University bill. Once again, thousands of students gathered near the Parliament and elsewhere to protest. They allege that by introducing such a bill, the entire higher education system will have a bad impact in the future.

The protesting factions claim that KDU will function as a State university that provides higher education in other disciplines. However, they allege that the institution will function according to the principles and ethos of military culture. Also, they charge that the governing authorities of the university will consist of too many military officers. Another key disagreeing aspect is that according to the Act, the protestors claim that the students’ unions will not be allowed to function, unlike all other State universities.

However, the Government rebuffs all these allegations and claims on the KDU bill. The KDU authorities state that the bill is relevant only to KDU and with that, the Government cannot govern any other university in the country.

According to the Bill, the KDU does not have a facility to have a faculty board, senate, or council and the administration is done through a duly appointed board of management.

They further declare that KDU can attract students who obtain their higher education can be attracted that saves many millions of foreign exchange for the country. Parents will prefer to enroll the students because of the more disciplined and secure environment offered by the university. Hence, the first choice of such parents would be the KDU, says the KDU sources.

Public is openly demonstrating displeasure over the ongoing upsurge of constant protests. Thousands of commuters are stranded in traffic snarls. On the other hand, the day-to-day activities of thousands of innocent bystanders are being hampered by the demonstrations. The public loath the inconvenience caused by demonstrators and also vehemently oppose the actions of the protestors in this crucial moment on Covid-19.

The public opinion is that the protestors are endangering the safety of others and will spread the virus even to faraway places they travel from.

The public opinion is that the Government is taking an exceedingly mild stance on the menace. They believe that either the Government must give in to the demands or take stern action against perpetrators to stop public harassment. On a different note, the Colombo magistrate court recently quashed a request from the Police to prevent a student demonstration, confirming the public trust in the judicial system of the country.

Despite the intense vaccination program, the daily count of active cases going up daily. The hospitals have reached the maximum capacity and the health authorities predict that the system will collapse if immediate action is taken to curb the spread.

In addition to the Government authorities, every health-related institution, member of the clergy, and the public plead the protestors to at least temporarily stop the public demonstrations until the enduring ghastly Covid 19 situation subside, just for the sake of the fellow citizens. However, so far, the trade unions have not shown any flexibility on the issue. Whilst some of the protests were temporarily halted, others say that they will continue to protest.

Unlike previously, the Government has not used force such as using tear gas or water cannons, etc. to disrupt gatherings.

The authorities have not taken any drastic action against teachers and principals who violated the recent Education Ministry circulars calling all State workers for duty. Nevertheless, the Government has explained the current financial crisis and pledged that they will sincerely consider the present demands and offer a reasonable solution in the next budget proposals.

Except for the protestors, a few of their sympathisers, and political opportunists, the rest citizenry is keenly expecting the Government to take whatever means within the law to stop this public nuisance. At this difficult time, all stakeholders must compromise the demands and come to an amicable solution without paving the way to several new Covid-19 clusters.

The Government is expected to offer credible evidence that they will look into the issues such as teacher-principal salary anomalies, Kotelawala Defense University bill, fertiliser import restrictions, and other pressing problems.

On the other hand, the protestors, without demanding the pound of flesh, for the sake of social responsibility, compromise the country’s ongoing health and financial crises and are accommodative to the Government’s proposals.