Public appetite for a new Constitution 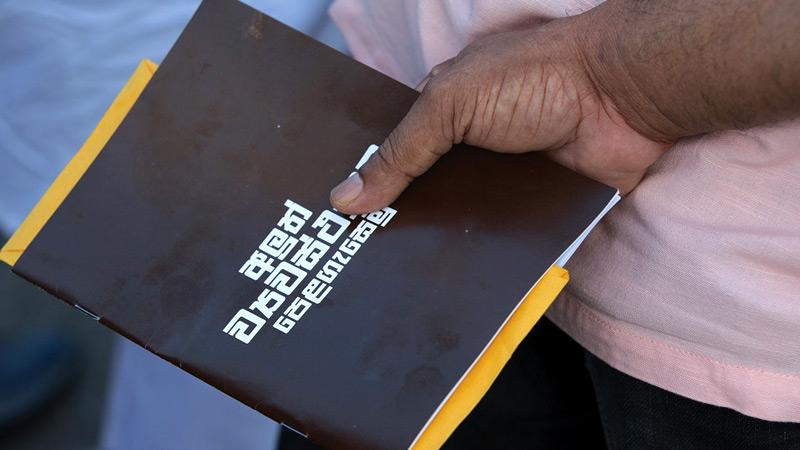 There are two ways of making a country work — one is by putting it to work, and the other is by changing policy. The first option is most often the one that works, if history is anything to go by.

When Deng Xioping wanted to make changes in China he cut the size of the Chinese military by one million. Just like that. There were no preliminaries — no vast detours to decide on feasibility of policy, or to change the documentation.

Not that anybody wants the Sri Lankan military downsised. But the example there, is to show that ‘vision’ is about implementation and not policymaking. In the context, it is good the current dispensation began with an emphasis on vision rather than the political document. The constitutional change can wait. Maybe it’s time for a new draft, as some say, but it’s still not the uppermost priority.

Even in China, when they talk about what made the country work, they don’t talk about the communist party manifesto, they talk about the Chinese dream. It’s not borrowed from the US though we’ve heard more about the American dream than the US Constitution. People want the dreams for their countries to transform into reality, and they often know it doesn’t happen through paperwork.

Political scientists believe that nation building is through evolution and not revolution. This is why it was silly that over the top adherents called the last Yahapalana rule a revolution when it happened. We all know where all that went. The only good thing they did under that regime, someone joked, was that they did not write a new Constitution.

Thinking of which, we have all seen the calamities caused by nation states that were created by redefining national borders in the colonial era in particular. These re-bordering exercises went against the evolutionary grain of nations. The result was calamity, and often discord, and we see it among friends in Pakistan and in India for instance.

Fortunately we were an island nation and the sea borders were too stark for any administrator to draw an arbitrary line across our land mass. So we clung to those teardrop shaped (blue) borders, but imagine when we were told recently that we should redraw those lines and build another nation within a nation?

It didn’t happen fortunately, and the baseline sentiment that it shouldn’t happen was what did the trick. There wasn’t the majority consent — and its majorities that build or break nations, not constitutional documents.

This is not to say that the idea of a new Constitution which some are more keen about than others is misplaced. But it’s about priorities, and it’s good that this Government didn’t put the legal draftsmen ahead of the dreamers.

The LTTE or the remnants of it and the Diaspora meanwhile are concerned about the Chinese presence in the country and have forgotten that no nation can be dominated without the consent of its people. Many in that same Diaspora were unconcerned that the map was to be redrawn as Eelam. Some in that network became physically ill and died after Velupillai Prabhakaran and his Eelam movement came to a gory end at the Nandikadal.

Unfortunately there were many such moping people that were personally known to the writer. I’m not taking any personal pleasure in saying it, but it was sad to see people of an otherwise perfect disposition being so invested in the idea of redrawing the map. Meanwhile, on an unrelated issue, somebody had quipped that Sri Lanka’s growth trajectory was below par since 2009, but maybe he was right only if the numbers are taken as an average.

Growth between 2010 and 2014 was robust to say the least, and that was without any talk of changing the constitution. The other aspect of constitutionalism in this country is that it becomes difficult to implement what’s in a Constitution when there is no grassroots support for a cause.

It was seen clearly with the 19th Amendment and the lack of public support for the institutions created by it. The constitution can’t come first with the hope that the organic welcome for it as an idea would follow. That’s simply an act of putting the cart before the horse.

“While the discussion for political reform towards power-sharing and devolution is negotiated on the macro level, the realities of effective service-provision and recognition of specific identity groups materialise at the local level.” So wrote Bigdon, in her PhD thesis (Bonn, Germany) which was based on our country.

Her observation is true at many levels. Democracy at the local Government tier is an under appreciated factor in the world’s new democracies writes the don. She goes on to observe that there may be internationally accepted norms of good governance but these need to be approved by local stakeholders.

The State has not lost its capacity for action in this country, however, and Bigdon need not be too apprehensive about that. The State has had no time or motivation to implement constitutional change and whenever it has been done it was a result of substantial necessity or oversized egos.

The autochthonous 1972 constitution perhaps has only one flaw — it was a tad too late in coming but the Jayewardene presidential model document of 1979 was certainly not a result of any popular clamour for systemic change of that order.

Obviously the ‘State’ personified at that time by the political colossus of the era JR Jayewardene, was not shy to implement change, local level stakeholders be damned. But our good doctor is right when she says that without stakeholder approval ideals embodied in big documents tend to be top heavy and would enter into choppy waters. She doesn’t say so in so many words but her implications are obvious and the Jayewardene constitution though it technically stood the test of time, was forever plagued — and according to most, was a plague.

This is not the outcome anyone in this country wants for a new constitution which is why the regime has to be given some marks for not being in an inordinate hurry. Covid and the resulting slowdown may have been one of the reasons, but Covid chaos per se is another reason a new document to replace the 79 JR constitution may not be considered a top priority at the moment.

The country’s economy related problems are so urgent that anything as distracting as a new constitution may be unnecessary, and speaking of grassroots support the Sangha, Veda, Guru, Kamkaru — they are all gobsmacked by the way life as we knew it had been upended due to the Covid havoc.

Nation building does not come to a standstill though, but the soldiers and the ordinary folk are already in the trenches doing the heavy lifting for the job which begs the question, are the drafters of a constitutional document better equipped to do that work at this stage?

The teachers are agitating for a cause that’s confined to their turf, and it cannot be counted as any desire at nation building, even though Joseph Stalin might make a claim to that aspiration too the next time. But the silence of the vociferous ‘elite’ is conspicuous at the moment.

The new Constitution is also not all about Provincial Councils over which there is so much back and forth that a visitor may think that’s the only meaningful element in our framework of laws.

The issue of the Provincial Councils has its own momentum — or lack of momentum as the case may be. The reality has been that the grassroots — or stakeholder — enthusiasm for the institution of PCs has been abysmal. That alone is not going to be the reason that decides if there are PC polls or not, or whether the PCs survive in the long term or otherwise.

But changing a whole constitutional document in a hurry because of just this one issue would to put it mildly, be an overreaction. There is an appetite perhaps for a new constitution, but it’s not a ravenous desire. People are willing to wait for something more than what’s merely palatable.