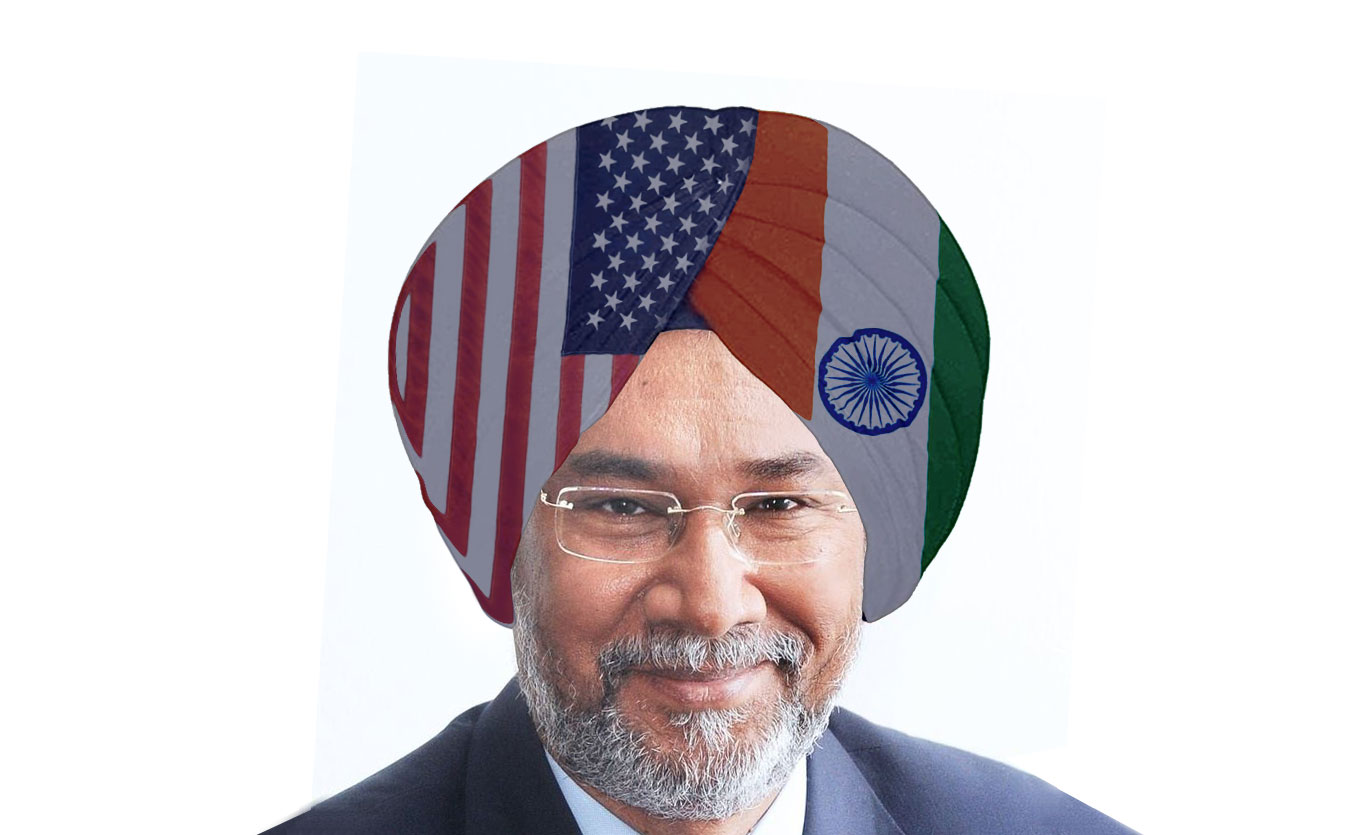 Name-dropping impresario Dayan Jayatilleka last week, kicked his English slavers Locke and Hobbes out stage right, and hurrahed on a high-kicking chorus line of the Pope, Modi, the UN’s Gutteres, Manhattan slumlord Trump’s neocons, and corporate tax-shelter Delaware-Biden’s neolibs. Sadly, he has only flaunted their soiled underwear to us.

Dayan wishes us to tremble at the thought of a warmongering Biden and/or Trump threatening us with a Yemeni, Syrian, Iraqi, Libyan-style apocalypse soon. His thundering at our primitivity, recalls Shelley’s Ozymandias: “Look on my works, ye Mighty, and despair!’

And indeed despair we do. Not for ourselves or for our future, but to what depths Comrade Dayan’s opportunism has descended. Let us paraphrase for him what Tanzania’s Nyerere said in Swahili about the US: “It is a one party-state, but with typical US extravagance, they display themselves as two.”
Let us also interpret what Syria’s Assad recently recounted on the unchanging nature of US foreign policy: The US does not have a president, it has a powerless CEO, and an unelected board of directors, representing corporate lobbies: Banks, Weapons, Oil, etc.

PostMarxist Dayan wishes instead to dazzle rather than elucidate. He uses the job title of peon to insult both ‘minor’ employees and belittle the role of a Prime Minister in relation to a President. But little does he know that peons and chauffeurs have under successive UNP regimes, of which he is once again an avid pochchi-holder, become kingmakers. They are the only ones who know what is really going on, carrying Damoclean stilettos in their chit-filled hip pockets – though unfortunately only to get their sons front-desk jobs.

He mentioned the Pope complaining about nationalism, the same Pope whose toe-kissing, leper-embracing photo-ops and public relations campaigns are conducted by an extreme-rightist Opus Dei ad outfit. We well understand the Pope’s concern. After all, the Italian patriot Garibaldi who wished to unite Italy, imprisoned the pope, drove out the priests and expropriated church lands. Can you believe it, mama mia! In Italy of all places.
The papacy had to wait decades for the fascist il Duce Mussolini to compensate them for Garibaldi’s daring, to get the dictator to turn the Vatican into a sovereign state, and give them tax-free status. For what? For the church on its every-Sunday pulpits to support the invasion of Ethiopia in 1936! Has the pope paid compensation to Ethiopia yet? Have they renounced their fascist trysts?

He then invokes his “old friend,” former President of the imperialist “Socialist International”, the Portuguese politician, Guitteres, who is now Secretary General of the UN. If Guterres is indeed a socialist, he should go sotto sotto on Sri Lanka, at least until Portugal pays full reparations for what it did in Sri Lanka. And perhaps after we have recovered from this nightmare of over 500 years now.

Amnesia seems like a continent inhabited by such associates of his. Dayan’s erstwhile tag-team partner in full-body contact word-wrestling, Tisaranee Gunasekera, last week, decried imminent dictatorship, claiming fascism was caused by some ‘flight into irrationality’. No reference to Germany’s genocidal practices in Namibia in 1903, where many of the later Nazi actors got their kindergarten training. No reference to the enduring legacy of colonialism, imperialism, and no mention of redivision of the world. How sad it is that such lame ommissioners and diversionaries pose off as illuminati, steeped in Euromania.

This week, Dayan, acting some whiny princess questioning a suitor prince’s masculinity, continues his sad efforts to rile India – so blatant, it is truly pitiful. He decries big India’s lack of influence on a “small island” calling it: “minimal, marginal, ineffective.” He recalls Donald Duck taunting Sylvester the Cat that that little blonde Tweety Bird has again pooped on its head. There! We resorted to some Hollywood / Disneyland, whose names Dayan drops to exhibit his unipolar worldliness.

In keeping with the terms of his release from prosecution, puppeteered by India’s secret services in the 1980s, from the consequences of adventurism and infantilism, and a molecular misreading of the national question, Dayan Jayatilleka has become a broken-winged messenger for imperialism and its subpostmasters, threatening dire ramifications if Sri Lanka insists on its attempt to rise from 500 years to shake off the shackles of subjugation.
Dayan then goes petty pecuniary bookkeeper, telling us the 13th is a “small price to pay”. Dayan knows full well this would plunge us into another 1987-1990 replay, where he can then act out his role of overseeing mass murder again. It is indeed fascinating how so many of those ‘inform’-ants and members of macabre death squads transfigured into such avid NATO-funded archangels of human rights.

He asks if Sri Lanka can “risk a unilateral move on 13A triggering a potential, partial reverse effect.” Here his tattered EPRLF lungi shows, for old “Northeast” Minister Dayan is recalling his old leader Perumal’s Unilateral Declaration of Independence, which ended in the poor chap’s hurried exile to India.

To Dayan: Europe, the USA and India are dispassionate observers appalled by a “small island’s” uppityness. To him, the Accord ‘pivoted’ India away from supporting the “Tamil cause”. He cannot admit that India trained the LTTE so as to bring Dayan’s liberator Yankeee Dickie JR Jayewardena to heel, and deserved oblivion, ever dreaming they can bring some of their policy makers’ big-nation hallucinations to fruition.

So Dayan is now no political economist, traveling from yahapalanaya to boo-palanaya: “The most rudimentary geopolitical analysis would say that this island’s contiguous Northern and Eastern Provinces, with a fairly compact majority of Tamil speakers – an Indian language – and the Trincomalee harbour, constitute a natural buffer for India…”

Whoa! So here is Dayan stripped naked again, singing straight out for his separatist supper, justifying in advance another parippu encroachment – though now we import more dhal all the way from Canada and Australia. To heck with the carbon bootprint, apparently.

The colonial great game has been to pit India against Sri Lanka, minorities against majorities and vice versa, to maintain the not-so-ancien colonial regime yet to be evicted.

The need of the hour is for all Sri Lankans to demand that we resolve our own problems. It is no point recalling that the LTTE Thileepan hunger strike and death was against Indian troops, when vocal mercenary minority leaders demand Indian or Saudi or Israeli intervention, and no one tells India or the US or the UN or the EU that interference will only make their much-hallowed reconciliation a distant hollow dream. If that is really what they dream about. Though we doubt it. They just wish us to keep eating parippu.

We are more than aware that India is greater than all of this. We are aware that many of its officials and diplomats, including activists in the BJP/RSS too, are appalled at flirting with imperialism. A strong Sri Lanka which can bolster and inspire India’s own great national cause is to their own benefit.

And as for Ozymandias, as for all world-conquerors, Shelley’s lines end:

Nothing beside remains. Round the decay
Of that colossal wreck, boundless and bare
The lone and level sands stretch far away.

Life is hard, banished into the parched circuit of the non-diplomatic dry zone.