President calls for support from all 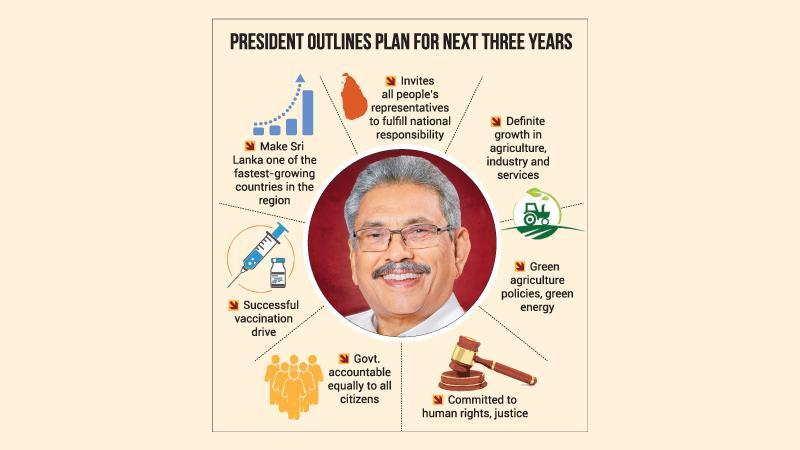 President Gotabaya Rajapaksa on Tuesday called for support from all people’s representatives to overcome the economic challenges faced by the country at present.

The President, delivering the policy statement at the inauguration of the second session of the 9th Parliament on January 18, said plans are being implemented to build a prosperous country and that he is ready to provide leadership to make Sri Lanka one of the fastest growing countries in the region in the next few years. “To this end, we are working to achieve definite growth in all three sectors – agriculture, industry and services,” he said, and requested support from all MPs, including those representing the North and East, regardless of differences, to make long-term development plans a success.

“We all have a national responsibility as people’s representatives to work together and build this country,” the President said.

He outlined the unexpected challenges faced by the Government during the past two years, resulting from the Covid pandemic. Highlighting that the economic downfall was not unique to Sri Lanka, the President said the Government carried out action to mitigate the consequences and burdens on the people.

“Key sectors which brought foreign exchange into the country, such as the tourism industry, foreign labour and apparel industry were affected. Many businesses, self-employed and daily income earners were affected,” he said, and as a result, the Government incurred a large expenditure to provide relief to the people, including the provision of healthcare facilities such as quarantine and treatment centres.

Sri Lanka is a success story with regard to the vaccination drive, drawing accolades from the international community, including the World Health Organization (WHO).

“We compare favourably against many countries in terms of pandemic control,” the President said, having vaccinated over 85 percent of the targeted population and also providing the booster dose.

The President also reminded the assembly that the people entrusted him with the responsibility of national security when they elected him and that this has been achieved. National security had been a key issue during the election due to the Easter attacks and the rise in crime. To address the latter, the President said the Government initiated reforms in the police force as well as the provision of more facilities and trainings for them.

On the human rights front, the President reiterated the nation’s respect for international laws and conventions although “we need to correct the misconceptions that have been taken to the international community in the past regarding our human rights.” He said “during my tenure, the Government did not support any form of human rights violations.” On the contrary, the President said the Government embarked on major investments in the battle-torn areas of the North and East.

He reminded the assembly that during his time as Defence Secretary, over 90 percent of the land in northern and eastern areas used for military activities was liberated. The President added that the Government will address the issue of missing persons and ensure justice for the families. The Prevention of Terrorism Act was a contentious topic among human rights activists and the Government has taken action to address issues by planning amendments to it. In addition, the Presidential Pardon was granted to a group of LTTE members for their release, showing tangible results in the Government’s reconciliation efforts.

“We are ready to respond positively to observations made by the international community while giving priority to the country’s sovereignty and national security,” the President said, adding “we are a free, sovereign nation. While we respect our neighbours, we wish to pursue a policy of friendship with all states.”

President Rajapaksa also spoke about ensuring the rule of law, and transparency as well as strengthening democracy through an independent judiciary.

“A number of significant changes have been effected based on the five -point plan to increase the number of judges to end law’s delays and establish a more reliable and efficient mechanism for the administration of justice, increase infrastructure in courthouses, update obsolete laws, centralised digitalisation and capacity enhancement of related agencies,” the President said.

He added that steps are being taken to amend 98 laws under the broad reforms program in criminal law, civil law and commercial law. “Over the next three years, we will prepare the necessary legal framework to make Sri Lanka an internationally recognised, attractive investment centre.”

The President said infrastructure development continued despite the pandemic.

“We fully understand the economic difficulties facing the people today. Therefore, the Government decided at the beginning of 2022 to introduce a Rs. 229 billion relief package to the people,” the President said.

He added: “We set a guaranteed price of Rs. 50 for paddy. When the Government paid Rs. 50, the private sector paid a higher price to the farmers. Perhaps it was because of that decision taken by the Government that a kilo could be sold for Rs. 60 to 70.”

He also said policy decisions were taken to stop the import of several crops to encourage farming here, which worked out successfully.

“Our ultimate goal is to introduce modern technology to achieve higher productivity in agriculture, and to promote the use of bio-fertilisers in order to create an international market for non-toxic agricultural produce,” he said. He also called on all citizens to utilise every cultivable land to ensure food security, adding that 20 large scale irrigation projects being implemented will contribute to address farmers’ woes.

Referring to the serious challenge the country faces regarding foreign exchange due to accumulated issues overtime during many Governments, the President said the Government has taken unpopular decisions to control expenditure.

“In order to surmount this problem in the long run, we need to make great strides in our export industry through innovations, export diversification and value adding mechanisms. At the same time, there should be a major development in the areas of foreign currency attracting tourism industry, employment of skilled workers abroad, and information and communication technology,” the President said, and called on for more efforts to attract investment to the country, while empowering local entrepreneurs.

He said the Government will make better choices in future imports, opting for electric vehicles for example. He added that in the past two years alone, the Government had added a significant renewable energy capacity to the local power grid using wind and solar power.

“Our goal is to achieve the carbon neutral target by 2050. Sri Lanka is already a co-leader in the Global Compact for No New Coal Energy. We will not approve the construction of coal power plants in the future for any reason,” he said.

With regard to education, the President said education reforms will be carried out to meet modern challenges while infrastructure will be developed to facilitate learning infused with technology. The Government has identified key areas of the future job market and plans are afoot to facilitate students in this direction.

“In the past two years, allocations have been made to all universities to increase the number of students studying Science, Technology, Engineering and Mathematics (STEM) streams. Reforms have already been made to introduce courses in IT, English and Entrepreneurship for all university students, regardless of their subject stream,” the President said, adding that more universities will be built to open more opportunities for tertiary education in underprivileged areas, while attracting foreign students to our university system, including the option of non-state universities.

“There is no reason, other than the traditional political ideologies, not to give this opportunity to the children of the country. If the country’s legal framework needs to be changed to do this, it can only be done by this Parliament,” said the President.

Looking to the future, the Government identifies the importance of infusing technology in every field to achieve development aspirations, and aims to expand FIBER and 4G networks to provide Broadband internet facility to all parts of the country, under the guidance of the Ministry of Technology. At present, over 300 villages in 8 districts are already connected.

Covid propelled many sectors, state and non-state, to expedite plans for digitisation in a matter of weeks and the Government has facilitated this through an enabling network. According to the President, the recent International Telecommunication Union report states that Sri Lanka is at the forefront of countries with the lowest communication fees. The Government also plans to pass the Data Protection Bill, which received Cabinet approval, and the Cyber Security Bill for the protection of citizen’s data and security. A new legal framework to protect Sri Lanka’s submarine cable system is also being drafted.

“The Government is using state-of-the-art technology in the development of infrastructure in this sector in a manner second to none in the region. We hope to transform ICT / BPM businesses into a US $ 3 billion export sector soon, thereby transforming future Sri Lanka into a technologically-driven country. We also aim to create an environment where our future generation can compete with any country through the use of new technology and their own creations,” the President said.