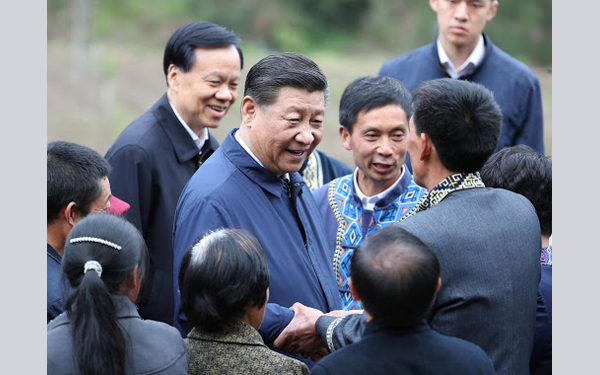 Earlier this year, China declared the eradication of extreme poverty. For anyone trying to assess what it means to the country and indeed to the world, it would be useful to look at what persistent penury has done to some of its population.

Even just 30 years ago, in desert-covered villages of northwest China, it was not unusual for brothers from the same family to share just one pair of pants. Some villagers lived inside earthy caves and slept on rock beds. Young women accepted arranged marriages for dowries worth the price of a donkey. Though hard to believe, this was the reality in Xihaigu, regarded by the United Nations as “one of the most unfit places for human settlement”.

Xihaigu was not the only place in China plagued by humiliating poverty. Liangshan, a prefecture in southwest China, captured the nation’s heart in 2016 with pictures of children climbing a cliff with bare hands on a vine ladder, the only thing connecting their mountainous village with the nearest school at the foot of the hill — and the world beyond.

By 2012, China had 832 counties and 128,000 villages just like Xihaigu and Liangshan. They were all listed as priority targets for the nationwide anti-poverty campaign.

The enormity of the task is mind-boggling. So not unexpectedly, when China announced the end of extreme poverty, the news was met by scrutiny and disbelief in some quarters. Questions have been raised about the reliability of the figures, the adequacy of the poverty standard and the cost-effectiveness of the effort. Let me address each of these questions in turn.

According to Chinese President Xi Jinping, 98.99 million rural residents have been lifted out of poverty in the past eight years, bringing the total number of Chinese escaping poverty in the last four decades to 770 million, which accounted for over 70 percent of poverty reduction worldwide. This also means that China met the poverty reduction goal in the 2030 Sustainable Development Agenda 10 years ahead of schedule. “We should not forget the fact that China has contributed the most in world poverty alleviation in the past decade,” noted UN Secretary-General Antonio Guterres. Leaders of South Asian countries such as Bangladesh, Nepal, Pakistan and Sri Lanka also expressed their congratulations.

Liu Yongfu, director of the government agency overseeing the effort, told reporters last year that the threshold for extreme poverty was set at 4,000 RMB yuan (US$628) per annum. Slightly above the World Bank benchmark of US$1.9 a day, it was “only part of the package,” according to Liu. “The Government also guarantees proper food and clothing, safe housing, free education for children and essential medical services.”

Apart from benefiting its own people, China’s poverty reduction experience has helped other developing countries as well, particularly its neighbours. For example, China hosted a seminar on poverty policy and practice for Afghanistan, Bangladesh, Nepal, Pakistan and Sri Lanka in 2007. Similar exchanges and projects on development cooperation have been carried out with the five South Asian nations as well as under the China-SAARC framework, including sub-national poverty reduction exhibitions, construction of roads, airports and schools, and vocational and agro-tech training programmes.

Why it has worked?

China’s anti-poverty success can be explained by what may be called a L-E-A-P strategy (i.e., Leadership, Empowerment, All-sector participation and Paired assistance). Hopefully some elements of the strategy can help other developing countries move faster towards the Sustainable Development Goal of “ending poverty in all its forms” by 2030.

A campaign on such an enormous scale would not have been possible without the mobilisation and execution capacity that the Chinese system is best known for. Strong leadership is the key to delivering it.

In 2017, the leadership of the Communist Party of China (CPC) declared “war” on poverty. The choice of word made it abundantly clear to party officials that their leaders were treating the issue with utmost seriousness and urgency.

President Xi Jinping personally took charge of the matter. He promised that “no one will be left behind” and warned officials against deceptive efforts.

Apart from setting an ambitious goal, President Xi also called for “targeted poverty alleviation”, demanding tailor-made solutions for different villages and groups. This strategy avoided the easy, one-size-fits-all solution that often created waste and discontent in a vast, diverse country such as China.

As a Chinese saying goes, “Better teach people how to fish than just give them fish.” Experience shows that people who get rid of poverty by receiving handouts instead of training would soon fall back into poverty once the help is withdrawn.

In Liangshan’s case, young adults were taught vocational skills to help them find jobs in cities. Agricultural experts were sent to pass on know-how about growing cash crops. Peasants who had only small potatoes for supper have become planters of organic strawberry, a business which brings over 20,000 yuan (US$3,140) per head a year.

What was most remarkable is the human resource committed to this campaign. More than 255,000 teams of three million up-and-coming party officials were sent from across the country to join millions of local officials in the battle against poverty. They were asked to stay in their posts until their villages were declared “poverty-free”. Many of them were promoted or rewarded with national honours afterwards. The Government channelled 1.6 trillion yuan (US$ 251 billion) into this endeavour, roughly one-sixth of the GDP created by the world’s second largest economy in 2020.

Yet poverty alleviation should not and cannot be the business of the Government alone. China’s corporate sector invested over one trillion yuan (US$ 157 billion) in the poverty-stricken areas. Many companies made donations to rebuild ramshackle dwellings, create funds that rewarded work on village roads or set up convenience stores that sold daily necessities at reduced prices. What did they get in return? A debt of gratitude and millions of potential customers.

Richer provinces and cities from China’s eastern coast also stepped forward to form pairs with poor ones in the interior. For example, the coastal province of Fujian partnered with the northwestern province of Ningxia, of which Xihaigu is a part. When serving as Fujian’s deputy party secretary in the 1990s, Xi visited Ningxia to discuss how to help villagers in Xihaigu emerge from poverty. He was behind the momentous decision that led to relocating the villagers to more hospitable places at the Government’s expense.

Min-Ning, the place name coined by Xi from a combination of Min (another name for Fujian) and Ning (the usual shorthand for Ningxia), has since prospered with the help of farm experts travelling half the country to teach the locals how to grow grapes, wolfberries and raspberries and start their own winery business. Their rags-to-riches story had been adapted into a drama series which was aired early this year. It became an instant hit with viewers young and old and received a rating of 9.4 out of 10.

China has reason to be proud of what it has accomplished, but the battle is far from over. By delivering what it has promised, the CPC is driving up expectations. Today, people in Liangshan and Xihaigu no longer worry about whether there are enough pants or what to put on the dinner table. They want better education for their children, more accessible healthcare and more comfortable nursing homes. As the CPC celebrates its centenary on July 1, 2021, it must embark on another mammoth task to raise living standards for all Chinese and lift hundreds of millions into middle-income status.

China, Afghanistan, Pakistan, Nepal, Sri Lanka and Bangladesh all have great development potential. They have much to offer each other and contribute to the 2030 Agenda for Sustainable Development (SDG goals). Their foreign ministers agreed at a recent virtual meeting to create a China-South Asia poverty reduction and development cooperation centre to share best practices. China will host a forum on the role of e-commerce in reducing rural poverty and post-Covid economic recovery. No one should be left behind as the world embraces a better, shared future.

There are many lessons that can be learned from China’s experience in poverty alleviation for all developing countries around the world. China and South Asian Nations are natural partners and there is a lot that can be achieved together.

(The author is a current affairs commentator based in Beijing.)