Post-Conflict Sri Lanka: Blessed are those who can walk and those on crutches too 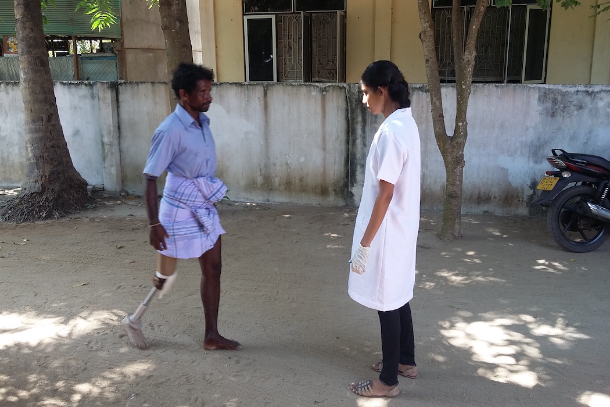 It is now more than 10 years since the entire country was liberated from the threat of terrorism. Slowly but surely, normalcy is returning to this land. As is prudent in any society that is emerging from a 30-year long conflict the Government has adopted a strategy of phasing out security mechanisms. ‘Prudent’ on account of the nature of the enemy and the fact that thousands of people associated with the terrorist outfit mingled with those who were not when the security forces finally rescued them.

One by one, however, the barricades have gone, checkpoints have disappeared, and summary stops gave way to random checks which too became less and less frequent. We are not completely free of these security measures, but there is certainly reason to feel freer than we were, less on account of the downgrading of these mechanisms than the removal of principal threat.

Conflicts leave scars, some visible and some not. There is greater scar-visibility in places where the fighting was most intense, in our case, the Northern and Eastern parts of the country. This conflict, nevertheless, spilled over the relevant boundaries in many ways. First, anything and anyone was ‘fair game’ to the LTTE. The Central Bank was attacked, a President was assassinated, and therefore the point does not require elaboration. It ‘spilled out’ because those who had to take out the enemy and save fellow-citizens came from all parts of the country. Economies depended on the salaries of the troops, and their death or maiming caused grief. Yes, some scars are more visible than others.

We move on, though. As so we should. That which was damaged gets rebuilt. The dead are remembered by those they left behind. Grief is not a collective thing. It is personal, regardless of the identity of the dead or the aggrieved; regardless of loyalties and preferred political outcomes. If we lamented mass slaughter in greater degrees of collectiveness then, we now focus, if at all, on our individual losses. Here in Colombo, as the city becomes more beautiful by the day, conflict-signs have all but disappeared.

Invisible, however, does not mean ‘non-existent’. There are times, for example, that we remember, if something triggers reflection. Today is a day like that, as the second anniversary of war-end is celebrated. Remembrance came to me in a different way, though. I saw a young man on crutches. I immediately thought, ‘Johnny Batta’, the name given to the anti-personnel mine that the LTTE buried in their thousands all over the Vanni and which cost hundreds of soldiers their legs.

I remembered, then, the tireless and dangerous work carried out by the security forces to clear the Vanni of landmines, one square inch at a time, with no map or reliable information about location, those responsible for burying being dead or (naturally) averse to offered guide-services. My thoughts also went to a day in either April or May 2009.

At that time, the LTTE leadership had decided that it could no longer depend on the support of Tamils living in areas under their control. The days of volunteering were long gone. The retreat that began when the LTTE lost Silavathura marked the beginning of comprehensive hostage taking. All civilians had to flee with the LTTE leadership. As the troops moved relentlessly forward, the LTTE had to increase the speed of retreat. They were hampered by the slow. They knew they could only be as fast as the slowest in the group. The slowest, naturally, were those who had lost their legs to the very devices the LTTE had planted to stop or delay their pursuers. There was an easy solution. ‘Easy’ because it was the LTTE that had to come up with it and because the LTTE is what many always knew believed it was.

Some 40 women, all on crutches since they had all lost at least one leg, were ordered to get into a bus. Then they blew it up. They were all Tamils; Tamil civilians injured by devices set by terrorists in the name of liberating the Tamil people, terrorists supported by word, action and funds by sections of the Sri Lankan Tamil Diaspora and whose crimes were regularly whitewashed or responded to with silence by the Tamil national Alliance. They were all, in one massive flash of fire and brutality unburdened of all scars, visible and invisible.
We are told to be grateful for small mercies. We are told not to complain about the lack of shoes, because some people don’t have feet. These are ‘grin and bear’ recommendations. They are not always sourced to a will to subjugate though.

Right now, I believe those who can walk and dance are blessed. Thinking of the 40 plus women whose bodies were broken to pieces and who were instantly robbed of the right to dream, I think even those without legs, can feel blessed.