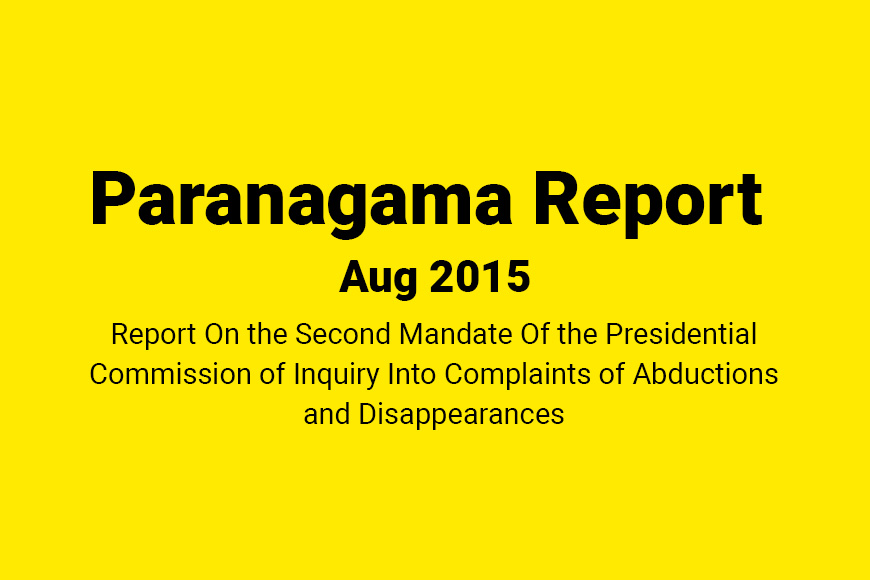 This Commission aims to analyse the complex legal standards applicable to military operations such as those that occurred in the final phase of the Sri Lankan conflict and to apply them to the unique set of factual circumstances that presented itself during the relevant time period. This exercise has not been adequately carried out in the existing report of the UN Secretary General’s Panel of Experts (Darusman Report) nor in NGO reports on the final phase of the conflict.

The Presidential Commission to Investigate Complaints regarding Missing Persons (hereinafter known as the ‘Paranagama Commission’) was established by the former President of Sri Lanka, Mahinda Rajapaksa, on 15 August 2013. The Paranagama Commission’s original mandate was to receive complaints and investigate abductions and disappearances in the North and East of Sri Lanka during the period 10 June 1990 – 19 May 2009 in order to identify the personsresponsible and initiate legal proceedings against them (‘First Mandate’). By June 2015, the Commission had received more than 21,000 complaints and its work under the First Mandate is ongoing. In order to expedite the work of the Commission as regards the First Mandate, two additional Commissioners were appointed together with more investigators.

On 15 July 2014, the scope of the Paranagama Commission’s mandate was expanded to address the facts and circumstances surrounding civilian loss of life and the question of responsibility for violations of international law during the conflict that ended in May 2009, in particular, certain matters referred to in paragraph 4.359 of the 2011 report of the Lessons Learnt and Reconciliation Commission (‘LLRC’). A legal Advisory Council to the Paranagama Commission, set up at the behest of the Commission, compromising international legal experts was also appointed. This aspect of the Commission’s work, which has been carried out with the assistance of the Advisory Council and with the benefit of an Expert Military Report prepared by Major General John Holmes, is referred to as the Second Mandate.

The Panel of Experts found credible allegations comprising six categories of crimes allegedly committed by members of the LTTE. These credible allegations included the fact that approximately 300,000 to 330,000 civilians were kept hostage by the LTTE in the Wanni and prevented from leaving the area, constituting a ‘strategic human buffer’ to the advancing Sri Lankan Army. The Darusman Report further states that these civilians were forced to join the ranks of the LTTE, to dig trenches and prepare other defences, ‘thereby contributing to blurring the distinction between combatants and civilians’. Civilians who attempted to escape were shot by the LTTE and the Darusman Report notes that the LTTE fired artillery ‘in proximity’ to large groups of civilians and in addition fired from or in in proximity to civilian ‘installations’ including hospitals. The Report found that ‘many civilians were sacrificed on the altar of the LTTE cause and its efforts to preserve its senior leadership’.