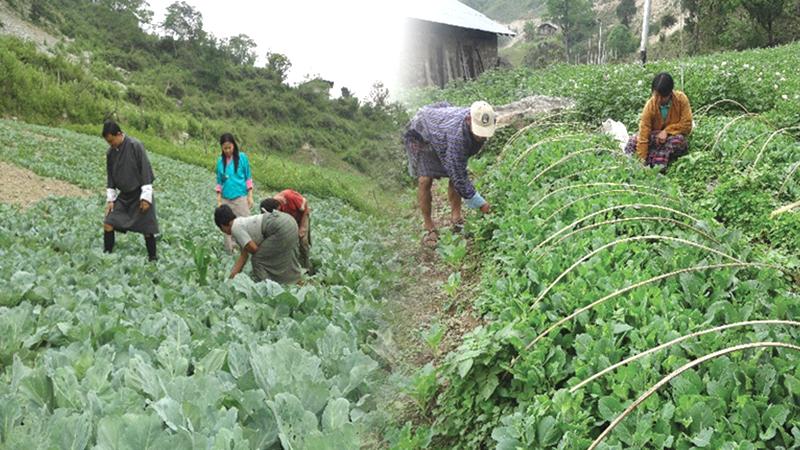 President Gotabaya Rajapaksa’s detractors are not relenting in their opposition to the organic fertiliser project.

They say it’s ‘chemical phobia’ and are in the process of whipping up some of the rural cultivator community in protest against the new policy.

Phobia or not is not the point. This is also about organic farming. Now, nobody needs to be told particularly that organic is the vogue tendency the world over, in farming and in the sale of agricultural produce.

Organically grown food fetches three or four times more the normal prices everywhere in the world, and in this country too, especially in the chic specialty markets in Colombo.

So, whatever anyone may say about it, this project and goal is idealistic. There may be practical difficulties, but what’s not quite fathomable is the fact that the critics have chosen to say that the project is useless and serves no purpose. They can’t be living on this planet. Next to the concern about global warming, is the general yearning especially in the West to go for organic produce. It’s more then just a fad. It’s a health concern. There is a massive premium demand for organic produce, and Sri Lanka could be the first country to exploit that market.

The competition in fact is ahead of us. The first country that declared this goal is Bhutan. There is a story that hangs by this.

Bhutan is celebrated, especially in the West as a bucolic nation that is a happy and idyllic place that has a zero-carbon footprint. Nobody in Europe or North America for instance faulted Bhutan and decried the country’s organic policy.

Of course it has been estimated that organic yields in Bhutan are 24 percent less than the crop yields using chemical fertilisers. But this has not deterred the Bhutanese, especially the King, from pursuing the ‘organic policy’, which is in pursuance of the Bhutanese ‘brand’.

In this context, it is worthwhile looking at some background with regard to the Bhutanese ‘brand.’ Bhutan is a carbon neutral country as stated, aiming for a zero carbon footprint.

Also, the Bhutanese spurred on by the policy initiated by King Jigme Singye Wangchuck have pledged to maintain 60 percent of the country’s forest cover at all times.

That’s not all. The Bhutanese initiated the Happiness Index that has now been aped by the West. So this is not a country we should scoff at. Of course our rather ignorant pundits scoff at every country, unless it’s run by white skinned rulers. The latest example was Bangladesh.Remember when we had that currency swap agreement, and they began speaking of Bangladesh with scorn until somebody had to show them what Bangladesh is today?

“When Bhutan’s Prime Minister introduced GNH to a United Nations forum as a paradigm for alternative development in 1998, it turned heads, and spawned a global industry in happiness,” writes Julie McCarthy in npr.org. So Bhutan is no ordinary place. Tourists idolise the country as the ‘birthplace of happiness.” The West of course appropriated what the Bhutanese started and came up with a Global Happiness Index of their own where they as Julie McCarthy observes, “try to quantify happiness.” Most Bhutanese argue that their version of happiness however, is based on Buddhism, which they say is not something that can be quantified.

Be that as it may, when the Bhutanese speak out on matters such as organic agriculture, the world sits up and listens. That’s because the people of Bhutan have a record on these matters.

That record counts for something. Even though crop yields are lower by about 23 percent nobody raised a hue and cry when the Bhutanese from a carbon neutral country which lays a premium on happiness, pledged fealty to organic farming.

It has been quite the different story here. The organic fertiliser project has prompted so many discordant notes, it is difficult to understand that people can be so out of vogue, so dramatically boorish. This is not to say that there are no concerns.

This writer has some concerns about the practical aspects of the policy as well.

But whether it’s wholly practical or not aside, the visionary element of the project has to be understood. It is rather shocking that it’s not understood though. In other words, it’s one thing to say that we are not sure the practical issues would make the project a success.

That’s not what the critics are claiming. They are saying that aiming for organic agriculture is a chemical phobia, and are unwilling to see that the so called enlightened minds in the West are all agog over organic produce which means there would be a ready market for any of our agricultural produce.

I use the words so-called above, because well, for some people nothing is the truth until the West embraces it.

In these parts we have been knowing the benefits of organic produce for eons, but that knowledge was considered irrelevant until the Western nations embraced the “organic” concept. Now that they have, there are immense economic benefits to be had from organic produce, and this is part of the vision for banning chemical fertilisers.

Practicality is a different question, and any reasoned criticisms in this regard, would no doubt be given a hearing by the powers that be.

Raising the practicality issue is not based on ignorance. But condemning organic fertiliser outright as addle-headed or silly is to be unaware of the reality in the rest of the world.

As stated this writer too has some concerns about practicality, but these are mere personal criticisms. Being vigilant about practicality does not mean that the baby should be thrown with the bathwater with regard to the organic fertiliser policy.

There is also something to be said about the single-minded determination on the part of the President to go ahead with the project because everything that’s visionary needs that kind of commitment.

Worthwhile achievements have always been against the odds. The pundits in a newspaper of record in the United States predicted just a week before the maiden flight in an aircraft by the Wright Brothers Orville and Wilbur, that mankind will never be able to invent a flying machine, not in the next three thousand years — not ever!

Even if certain folk may have reasoned and legitimate criticisms, it’s churlish and rather stupid too to scoff at the chemical fertiliser ban on the grounds that it is ‘phobic’ and eccentric and all that. Yes, there may be sacrifices to be made, and some discontent to contend with. The President has already said that the end result will be worth those discontents, which means he is willing to take a risk with a cause that he believes in.

For that you have to admire him. And, however, reasoned the critiques may be, it’s churlish to refuse to see the motivation behind the vision — even though one may not agree with the details such as the implementation. What Bhutan is praised so much for, cannot suddenly be so bad for us. Someone may retort with the rejoinder that Bhutan is a poor country. It is. But it is celebrated for its contribution to the healthier almost spiritual aspects of living, and those are things that cannot be ignored even in economically hard times.

The people of this country have generally been a step ahead of the pundits. When the pundits said the battle against terrorism can never be won, the poor people sent their sons and daughters to the battle front because they had the faith that the ‘impossible’ would happen.The jury may still be out on the chemical fertiliser policy. But so far what matters is that Gotabaya Rajapaksa the former Defence Secretary now turned president has made an excellent case for it.

The future may prove all the pundits wrong, and though right now nobody knows, the author of the project may have the last laugh.

‘Everybody has found a convenient place in Afghanistan, but what about India?’— Interview with AS Dulat, former RAW chief on India’s strategic...
Read more

‘Everybody has found a convenient place in Afghanistan, but what about India?’— Interview with AS Dulat, former RAW chief on India’s strategic...
Read more
Sri Lanka BriefNews, views and analysis of Human Rights & Democratic Governance in Sri Lanka