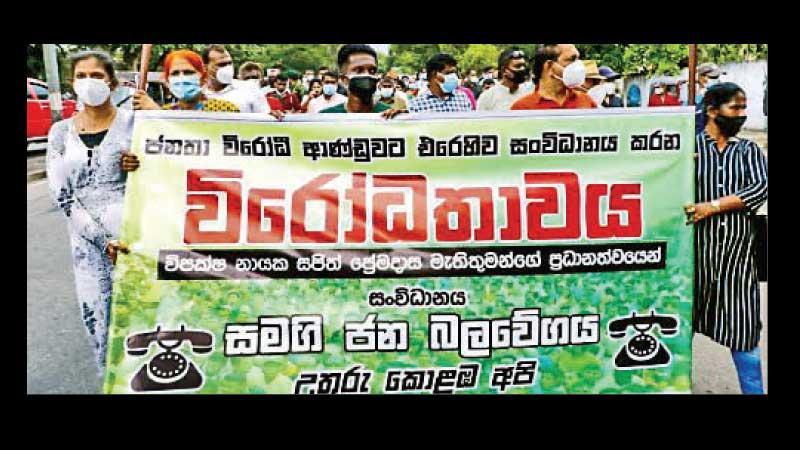 While countries in Europe such as Austria are locking down once more, the Opposition in this country insists on protest rallies that would increase the Covid numbers. Perhaps that’s the cynical intention — to have the Covid infections go up by tenfold so that the same Opposition can get the country locked down once more. Once that is accomplished Mr. Premadasa can say again, “we are facing economic Armageddon — an apocalyptic situation.”

This is what Premadasa said recently when interviewed by Al-Jazeera after one of those protest rallies so-called. The term Armageddon is used in a generic sense to refer to any end of the world scenario. Apocalyptic is also a word describing or prophesying the complete destruction of the world. A man seeing the end of the world in a regular economic challenge, is akin to the a chicken that runs helter-skelter claiming the sky is falling down.

Is the Opposition led by such a person fit to govern? Mr. Premadasa seems to think that he can win by the power of default. He thinks he can triumph because the global economy is battered and this country like so many others is feeling the repercussions of this Covid related downturn.

Kumara Welgama is upstaging him trying to steal his scene. The major fear of the Opposition seems to be that the economy would recover and grow by the time the next election comes around, putting them out of contention. It seems Premadasa wants to get in and be in power while his ‘apocalyptic scenario’ lasts.

Kumara Welgama says he is not staking a claim for the Premiership. That’s a sure sign that he is staking a claim for the premiership. He hails from the landed gentry, and is a heir to the mammoth transport empire that used to be. The transport and other businesses of the Welgamas, however, are still going strong — though empire it is not — and naturally Welgama thinks he is a cut above the ‘Premadasa boy from Jinthupitiya.’ Class and caste considerations though never mentioned out loud in polite society always come into play.

The Opposition if it entertains any hope of coming back to power needs to move beyond default mode and the ‘attack Rajapaksa’ strategy. But for the moment it seems to be stuck in that groove. The SJB has very uninspiring figures in folks such as Eran Wickramaratne and Harsha de Silva.

They have zero charisma and stage presence, and should wonder every day how they ended up in this vocation, as if regular number crunchers had been asked to pose as rock stars.

The very fact that the entire Opposition base has now turned to Kumara Welgama for inspiration and light-entertainment is telling. Welgama is originally from the Mahinda Rajapaksa camp but it seems the Opposition base thinks it’s better to be inspired by him than be uninspired by Eran Wickramaratne, and Harsha (insipid) de Silva.

Welgama is an old fashioned mob orator and raconteur. He is a bit on the wild side sometimes with his sexual innuendo, ribald stories and straight talk with attacks on his new colleagues in the SJB. He chided Harin Fernado for falsely reporting sick to avoid his appointment with the CID, and the latter lost his composure completely. All great fun all round, but other than to keep the base entertained, would any of this serve any purpose for the Opposition in the long term?

The Opposition does not have a movement. The SLPP in Opposition was a massive movement. This writer’s opinion is that this movement was formed entirely around the persona of Mahinda Rajapaksa, then MP, but now the prime minister. He was debarred constitutionally from contesting for a third term for the presidency and the movement chose the now President Gotabhaya Rajapaksa as presidential hopeful.

This was interesting. The then Opposition had a mix of the old and the new. There was the charismatic figure of the former president MR the base had coalesced around, and then there was the new prospect, the former Defence secretary, who added novelty value to the ‘ticket.”

The current Opposition has no such dual leadership attraction. Moreover, the leader Premadasa has already lost a presidential election.

It’s interesting that no candidate that had lost a presidential election has been returned to power on a second occasion. There have been those who lost, re-contested and lost again, however, and Ranil Wickremesinghe was one of them. On the first occasion he lost a Presidency to Chandrika Kumaratunge, and haplessly contested against Mahinda Rajapaksa on a second occasion and lost again.

Losing carries a stigma to it — and if it isn’t a stigma, it’s some sort of buyer’s remorse. Yes, they may choose a previous loser as a candidate but even the base can’t forget they really have no business running a previous loser, who has been already rejected.

So the Opposition has this baggage but eager pro-Opposition commentators feel that just by lapsing into default mode they have now elevated the Opposition to automatic succession mode. They know the country is going through some trying times due to Covid, and feel that they are ‘onna menna’ and on the cusp of power as a result.

But this is sad that they are hoping a crisis would lift them up. The last time the Opposition was hoping this was the case was in 2008-9. They felt the Rajapaksa Government was ‘mired in war’, and in an economic quagmire as a result with no money due to the cost of fighting, and that they would therefore coast through the next time by default. Didn’t happen.

If Mangala Samaraweera was around, the Opposition could have hoped that he would have worked some magic to excite the base when the crisis passes, and the Opposition would really have a winnable battle on its hands. But he’s no more, and it’s as if the base has no anchor now.

Samaraweera was polarising enough to get a solid bloc vote to which he only had to add a good chunk of the floating vote to cross the line. Of course he would have not been nominated for the Presidency, but he might have found a ‘third way’ to be a contender.

Why isn’t the Opposition a movement today if as the pro-Opposition pundits say, it’s one election away from power? There isn’t anything like charismatic and inspiring leadership there. They say Premadasa is ‘identified’ with this or that. They say for instance he has the common touch.

But, being ‘identified’ is not the same as being liked, and it’s as simple as that.

Could Welgama mount a challenge? Hardly. So once the immediate crisis is over, the Opposition has a problem on its hands.

It has to move from default mode to challenger mode. For this the Opposition has to think of ways to reinvent itself, but without Mangala Samaraweera the designer-in-chief of strategy blueprints being around, that may be a somewhat challenging job.

Even the Opposition base is not enthused by the recent protest rallies of the SJB, so called. This is obvious from social media. The comments from party sympathizers aren’t very kind.

They feel the SJB which didn’t lift a finger to ensure the country opens up after the Covid closures so that people could get back to work and business, thinks nothing of assembling in large numbers for its own cause. People don’t take kindly to those who ignore Covid for their own advantage, and that’s the trend worldwide. The protest meetings seem to have been a miscalculation, and it shows the Opposition’s current default mode is mostly a fool’s paradise.