Open Letter to all the Buddhism Bashing Protestors & their Organisers 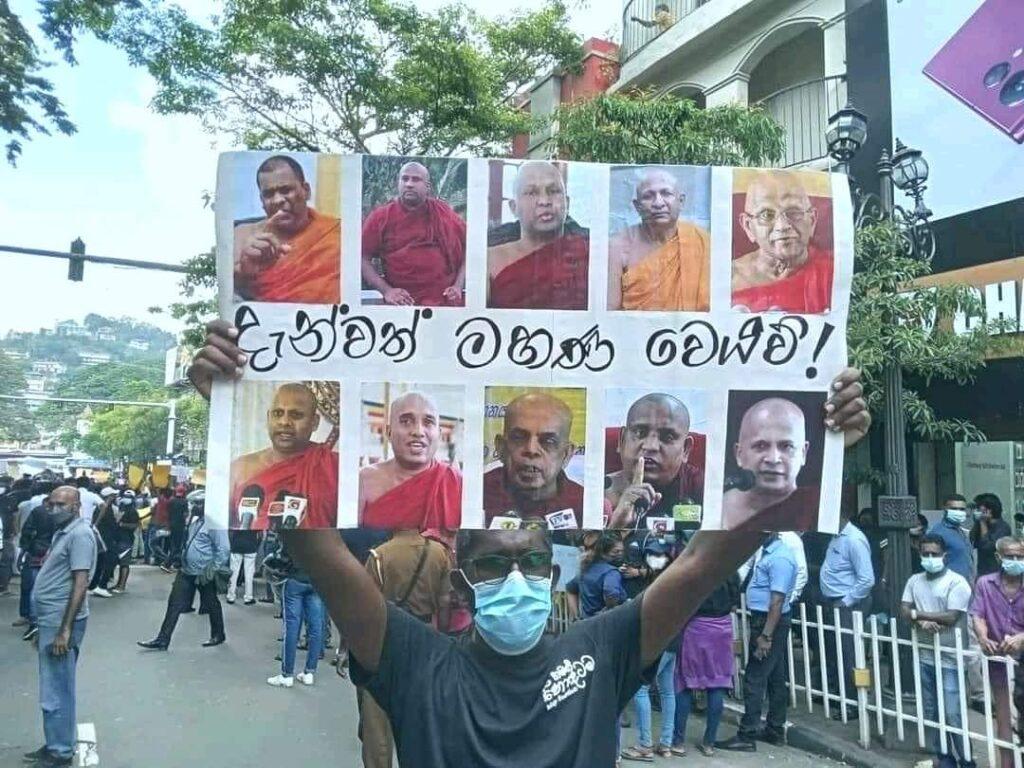 There is a saying that one’s freedoms and rights stop the moment another’s freedoms and rights are hindered. The recent public protests, we all presume was against governance and in particular the government in power which spiraled into a demand for entire Parliament to go home. Having agreed that politicians were to blame for the economic chaos in the country, majority of citizens joined in an unanimous show of support. What was thought to be spontaneous reactions of the public without external funding or organization is now in doubt, considering the rising number of attacks using slogans, posters & social media. These are the very people who go crying to international bodies complaining about discriminations to them but when they discriminate, it is supposed to be acceptable. The very people that preach ‘sensitivities to other people” are happily enjoying being insensitive to the majority people of Sri Lanka primarily because the institutes they represent have an unfinished historical project to destroy Sinhalese & Buddhism.

The organizers of these posters may not like some hard facts presented to them. When the Portuguese arrived in 1505 they destroyed majority Buddhist temples and most of their churches are built on top of these destroyed Buddhist temples. They did the same to kovils too. The Dutch & the British followed. The Church that today preaches humanity may like to return to its ugly past and recall 300 years religious wars in the name of religion or the Inquisitions that killed millions of people in the name of religion. To cover these crimes, there is a major attempt to show that Buddhism is a violent religion when not a single war has been fought to defend Buddhism and all of the nation’s/territories that embraced Buddhism did so having accepted the teaching of Buddha. No one was forcibly converted or killed for not converting.

These are a handful of the posts/posters promoted by hate schools & their heads being shared via social media portals giving a whole new twist to what we presume is a protest to oust corrupt politicians and put the country back on track.

This poster is saying that the Church Fathers have come to the streets & then is asking why the Buddhist theros with their paththraya is not doing the same.

Church Fathers coming to the streets to protest is nothing new as they have a history of protesting even for Prabakaran & LTTE holding their photos. Even after the end of LTTE, the Church fathers were continuing to demand Eelam and this project continues still.

This post is saying that the Buddha Sasana should have Church Fathers like this. We beg to differ because our theros never went to protest or protect terrorists or indulged in any form of violence through history which cannot be said when taking the records of the Abrahamic religions. It’s the ugly truth but something that needs to be said when unfair attacks are being made.

This poster held by a protestor is saying that Sinhala Buddhists must be completely eliminated. Now was this the reason for people to be asked to come to the streets?

So who is organizing these protests and posters? What is their real agenda. It is certainly not to ask the President to resign or to change Parliament.

This is one of the most hateful posts made & highlights the vicious mentality of the creators.

The post is questioning why the dirty Tooth Relic enshrined in the Dalada Maligawa in Kandy is not brought out to bring rains & solve the drought.  This recalls how anti-Buddhist government in 2002 allowed a State newspaper to humiliate Buddhists claiming we were worshipping a fake tooth & DNA should be tested. The writer Asif Hussein was interdicted but is a regular columnist. The editor Lakshman Gunasekera was sacked but was appointed editor of Sunday Observer in 2016 by the same PM in 2002. The vilification campaign against Buddhists using the media was documented with facts by the K D de Silva Press Commission Report in 1964. The interesting thing is that the more the Buddhists are bashed the bashers get rewarded with awards and scholarships for doing so. These are the very preachers of peace & reconciliation too.

This post is addressed to the Catholics asking not to give a dana (meal) to any Buddhist thero claiming it is a sin to do so because they are eating from them & speaking for the Govt.

Can people get this shallow in their thinking? Giving dana is part & parcel of Buddhism. No one is forced to give dana & anyone giving is merited depending on the thought behind the deed. Buddhism is all about the thought above the deed. The karma is based on this.

We have not seen protestors protesting against these attacks or asking the protestors to refrain from such vile posts.

This next post is saying that not only the useless politicians must be chased out but also the bald-headed Buddhist theros. It is accepted that there are some way-ward theros. They will meet their own karma – we do not need to tarnish our karma to punish them. However, is it only the Buddhist theros who are corrupt? Why not target others as well. Why only the Buddhist theros in the midst of a protest meant to be to correct the political system? Why are organizers and protestors not denouncing such vile attacks?

This next poster is to ask people to surround the temples – this is similar to the manner JVP carried out their initial attacks against the Buddhists & Buddhist temples in the past. Are the organizers now attempting to use the new JVP to do the same?

These protestors have been given raincoats with the Sri Lanka National Flag minus the 4 bo leaves – another effort to remove the place of Buddhism subtly & reinforce in the minds of the people that the Sinhala Buddhists are the fault bearers of every problem in Sri Lanka.

The efforts are afoot to remove Buddhist insignia as well – these are all calculated, planned and well funded    Video Player00:0002:50

This is one of the most shocking posts as it is advocating so much hatred – to corner the children of the armed forces & police studying in schools or universities & humiliate them wherever they go & not give them employment or allow to enter any shops. The previous male is advocating the killing of armed forces personnel – all these are happening under the cover of a public protest against the political system. Wonder where these martyrs were when LTTE was on a killing spree – the cowards hid under the bed when the armed forces sacrificed life and limb to safe the nation.

It is true that we are proud of our history & heritage – we have a right to be as do all other nations that have proud histories and heritage. We are proud of what we have but we do not denounce history or heritage of others nor do we try to take away or diminish their heritage & history – this is what sets us apart.

It is true we proudly claim to have defended the nation – because that is the historical truth. We also like to add that a minority from the minorities have always helped us – they did so then and they do so now.

It is also true that politicians come to power on the majority Buddhist vote but purposely put aside their duties as per Article 2 of the Constitution & instead resort to cosmetic shows to appease the Buddhists but happily fulfil the desires of the minorities who have the global ability to sway politicians in their favor. Sinhala Buddhists have been only good to bring people to power & they are discarded after that.

It is true that we are the majority in Sri Lanka but taken as a whole we are the real minority – there are 2billion Muslims & 75million Tamils but there are just 15million Sinhalese. While there are 2,3billion Christians practicing some form of Christianity in over 20 majority Christian countries, while there are over 50 majority Muslim countries & while there is no Hindu country there are over 1billion practicing Hindus in India. But there is only one country with Sinhalese Buddhists & they live in Sri Lanka. So people should not think it a crime that we want to protect & preserve the only thing we have. It is why there are attempts such as this to humiliate and displace the historical place given to Sinhala Buddhists & there are attempts to remove these symbols from State/Govt institutes/uniforms & even the constitution as well as mentally present the notion that Sinhalese Buddhists are not welcome to scare them into denouncing their own history & heritage though the culprits organizing these efforts have no problem in preserving the bloody past of theirs & glorifying these historical incidents too.

We have no issue in any faith feeling proud of their history & heritage but when they institutionally organize themselves to tarnish others, then it is prudent to bring these out for people to see through their modus operandi.

The drummed notion presented internationally is that the Sinhala Buddhists are discriminating others but, it is considered not done for Sinhala Buddhists to point out these insensitive & vile attacks. Is this hypocrisy or not?