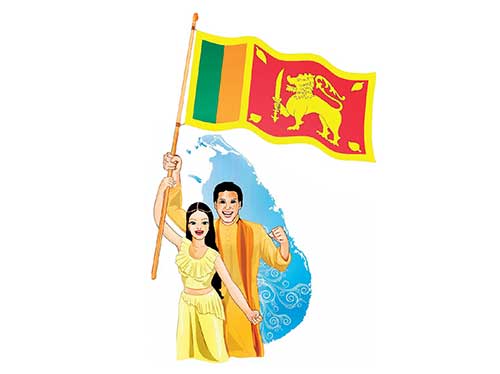 Around 20 years ago, a young politician with nationalist pretensions made an interesting observation (in Sinhala), the gist of which is as follows: ‘There is no such thing as a “Sinhala Race” but people think there is — we should exploit the perception.”

Interestingly, he was at the time in a political party that was contesting an election on a Sinhala card, so to speak. Now if there’s nothing called ‘Sinhala Race’ then there cannot be subjective identification with that term. Why then should anyone who speaks Sinhala vote for such a party, is a question he may not have considered.

The party didn’t do well in that election, returning just one candidate to Parliament and this too on the national list courtesy of predetermined ratios. Perhaps some ‘Sinhalese’ did consider ‘race’ as a subjective identifier; some as in a tiny minority. Barely three years later, a shift from Sinhala to Buddhist in political rhetoric yielded far better results and yet the overall vote was just a fraction of the population that spoke Sinhala.

Perhaps Sinhala or Sinahla Race aren’t that important when it comes to elections. Perhaps other factors have more compelling weight in the calculations of a voter. Perhaps, as he said, there’s no such thing as a ‘Sinhala Race;’ one might argue, never mind that nothing in this country has been as vilified as Sinhala Nationalism, real or imagined, and never mind that the vilifiers play deaf and dumb over act and word from other communities (real or imagined) that would, in terms of equivalencing, qualify for the ‘nationalist’ tag and, let us not forget, again by virtue of similarity warrant similar vilification.

Twenty years ago, turning to a random page in a copy of the Majjima Nikaya, I came across the Payasi Rajaagna Sutra which gave an insight into this issue of identity. Here’s the gist:

The sutra is essentially a conversation between Kumara Kashyapa Thero and an argumentative merchant who took issue with the doctrine of the Buddha and expressed doubt by posing unanswerable questions such as the following: ‘what is nirvana like?’ By way of response, the Thero related an anecdote about a fire-worshipping Jatila.

This Jatila had an apprentice of sorts. One day the master had to go on a journey and he had instructed the boy to make sure that the fire would not go out. The boy was careless. The fire went out. The boy didn’t know how to make a fire. He split the firewood to tiny slivers, he searched among the ashes for the fire that had gone missing. The Jatila, returning after a couple of days, duly reprimanded the disciple and lit the fire.

And so, the Thero expounded: just as he who does not know how to make fire will not make fire, those who without wisdom look for nirvana will not find it.

The application: he/she who looks for race without knowing what it is or rather what it is constituted of or is not empowered with techniques of identification, will not find it. My comment from 20 years ago went on the following lines: it is a good thing that identification is hard for if that was not the case that which was looked for would be destroyed or purchased.

And so, for reasons of political convenience Sinhalaness (or for that matter Tamilness or any other ‘ness’) misidentified is observed in the persona of the enemy of the moment. That enemy, admittedly, might even wear the identity-garb, sometimes with conviction that the cloth covers the real thing but more typically because it is also convenient. And so we have battles among the convenient for reasons of convenience.

Identity is an interesting thing. Prof Arjuna Parakrama, speaking on the subject at a Commonwealth Literature confab in Peradeniya University around 16-17 years ago, told the story of a ‘Sinhala’ individual somewhere in the North Central Province (if memory serves right) who, when asked who he was, had lots to say with ‘Sinhalese’ or ‘Sinhala-speaking’ either not being mentioned or mentioned as one among many self-identifiers. Parakrama was asked how he, Parakrama, would identify himself. His response was ‘good question.’ He did not answer.

And yet, nationalism is an often used word. Nationalists there are. Of all kinds. Rata, jathiya and aagama (nation, race and religion) are easy words that are used frequently in power politics. They are ferociously affirmed and equally ferociously vilified. It’s like a set of clowns or thugs averse to acknowledging silliness and belligerence respectively and therefore talk about the clothes they and their political others wear.

Of course the self-labeled nationalists (of all hues) are in-your-face visible. The more extreme the position or the more intractable in terms of political project(s) the more visible they are. And that’s where one finds the nationalist discourse. The label-wearers are the stars/villains. The parties they identify with have star/villain value. Whether their amalgam constitutes THE NATION is of course a moot point. They are part of it, obviously. They do shape/disfigure the political edifice. What they do and do not do, what they say and do not say, have a bearing on nation, nationalists, nationalism that have little truck with them.

It’s easy. Too easy, even. Profitable though in many ways for many people. Somewhere where those lacking wisdom cannot see nation, somewhere outside of the universe they traverse in nation-garb, there is probably a nation and a people who identify with it in ways that don’t make it to even the footnotes of the nationalist discourse.

That’s a good thing, for after all the shouting is done, the buildings brought down and upon those ruins other mansions or hovels (as the case may be), the blood letting is done and the wounds dressed, foundation and heart will remain. That’s how civilizations survive and reincarnate themselves.

Meanwhile, however, politics we will have. The young politician mentioned at the beginning still spouts nationalism. Less frequently of course and without any chest-beating whatsoever. He has reinvented himself several times and is quite conversant in the doctrine of strange bedfellows. He’s not done too badly, all things considered. He’s not done with nation, though. It is a convenience, after all, and a useful political tool.

[Malinda Seneviratne is the Director/CEO of the Hector Kobbekaduwa Agrarian Research and Training Institute. These are his personal views]