Of blinders and elephants… 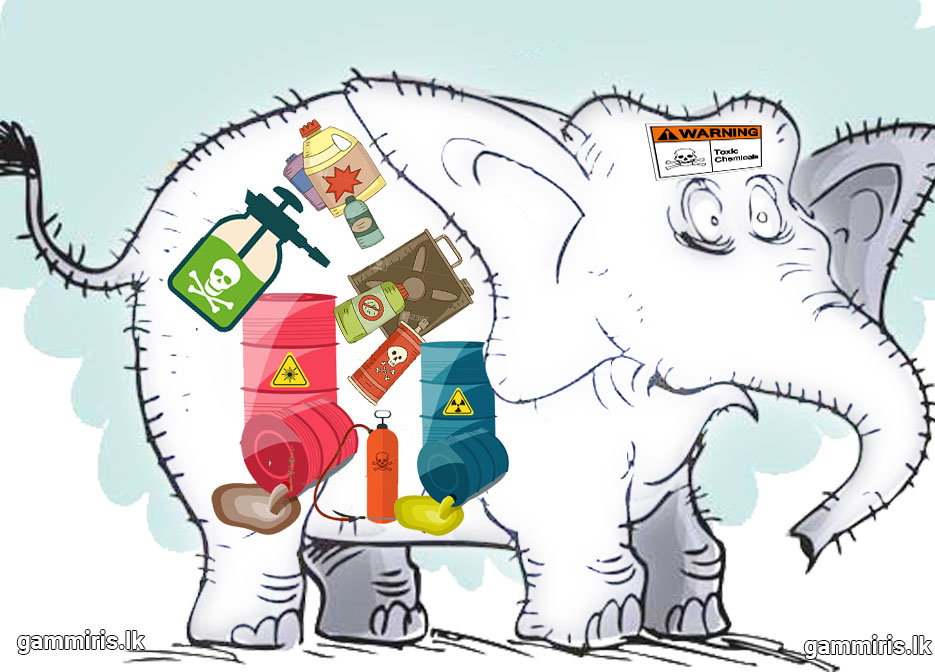 If capitalism is so great and is the best system to generate peace and prosperity, why has the Age of Capitalism been marked by endless wars and insufferable deprivation across the globe and within countries? Teething problems, did someone offer? Is it that or are war and poverty essentials of the capitalist story?

Obviously, in this game, those with power get to define ‘right’ and therefore ‘wrong.’ Bucks speak. And if anyone believes that truth cannot be bucked, one way or another, then simply consider the fact that corporations fund ‘research’ and task ‘researchers’ to obtain happy facts.

In the last match that Sri Lanka played in the ongoing T-20 World cup, against the West Indies, Roston Chase was caught by Bhanuka Rajapaksa off the bowling of Chamika Karunaratne. A beauty, the commentators said. ‘A blinder’ was how cricinfo described it. It was extraordinary, certainly, and helped Sri Lanka sign off on a relatively high note.

Blinder has another meaning. Sometimes called ‘blinkers,’ blinders refer to the two flaps on a horse’s bridle to keep it from seeing objects at its sides. This is typical in horse racing. You don’t want the horse to see anything but the path ahead. There’s a lot of predetermination involved, obviously. This is why the word is a metaphor. As a metaphor, it’s about keeping individuals or collectives from even considering alternative pathways. Assertions of the ‘I am the light’ kind, in religion or politics or anything else, essentially precludes or hopes to preclude consideration of anything else that might contradict.

Obviously, in this game, those with power get to define ‘right’ and therefore ‘wrong.’ Bucks speak. And if anyone believes that truth cannot be bucked, one way or another, then simply consider the fact that corporations fund ‘research’ and task ‘researchers’ to obtain happy facts.

Here is an example that would give an idea of how things work. In the early days of the Covid-19 pandemic the tobacco industry gave a lot of play to a story. Yes, it was not confirmed. Maybe it was true, maybe not. Some village in Europe where there was a relatively high percentage of smokers, the story claimed, showed a rate of infection lower than those of neighbouring villages. Even if the story was true, no study had been conducted to determine the true cause of this ‘anomaly.’ It could have been a spurious relationship. This didn’t stop the tobacco industry from indulging in wild extrapolation!

Are people so dumb that they can’t see through it all? Well, not really. Sometimes it’s just that they don’t have access to all the information necessary to make a decent call about most things. And it is not something that academics are immune to either. If you have been taught that there are various theories about the way economies or societies function and are transformed but after some of these are mentioned if focus is restricted to one particular paradigm, then that’s what becomes familiar. These theories take people through their A/Ls, university and postgraduate studies but also ensures that they are required to spend so much time in this restricted ‘world’ that they just don’t have the time to question received wisdom or consider alternative paradigms, and that’s what becomes ‘standard.’ It becomes ‘truth’ and ‘conscience’ demands that such truth be defended.

Wasn’t the Green Revolution marketed as an amazing mantra that would flood the world with prosperity? Was not the white-man’s-way marketed as evidence of civilization? Was not everything else branded as archaic and obstacles to progress? Was not ‘Progress’ defined? These ‘conclusions,’ were they the product of impeccable scientific inquiry? Was ‘science’ itself value-free? If so, why did Western ‘science’ move away from flat-earth theories? Why doesn’t Western ‘science’ swear by Newtonian Physics any longer?

One could argue that new knowledge invariably calls to question prevailing theories and their amendment marks scientific progress. That’s fair. However, not all processes related to knowledge acquisition and subsequent theorization are above board. These processes are not insulated by manipulation.

Here are some questions that might make us rethink received wisdom. If capitalism is so great and is the best system to generate peace and prosperity, why has the Age of Capitalism been marked by endless wars and insufferable deprivation across the globe and within countries? Teething problems, did someone offer? Is it that or are war and poverty essentials of the capitalist story?

What do blinders (or blinkers if you wish) do? They make us forget the elephant in the room. Elephants, one might say. Herds, then. There’s an elephant called ‘Health’ which we don’t see or are made not to see in a room named ‘Agriculture.’ There is the health of those who have to be hands-on with chemicals called for by ladies and gentlemen in the consumer side of things and of course the buck-makers in the sector don’t have to worry about. Well, they would worry about it if they could see the elephant called ‘Carcinogens’ or the one called ‘Nutrient-deficient’ in the room called ‘Consumption.’ There is a vast field called ‘Yield-density’ which economists are fixated about and in it there’s an elephant called ‘Nutrition-density’ whose presence, ironically, is marked by an absence.
So, blinders on, we wallow in the luxury-lap of pontification which essentially is an exercise in regurgitating received ‘wisdom.’ We say ‘run to the IMF.’ We don’t talk of what the IMF did and does and how the IMF conditionality played out over the past fifty plus years. We talk of scarcity and prices after hounding out elephants we want to wish away. Yes, we call them ‘externalities’ because they are hard to capture. We pick and choose from history, the 1970s for instance, leaving out the relevant global economic context and focusing on errors and egos, which is the easiest way of debunking theories.

We love to talk about the fertilizer crisis, but we don’t ask ourselves the obvious question: should we not revisit the chemical input issue? No one says ‘this should not be attempted at all.’ Right now we are in ‘it can be done, but not this way’ kind of frame. Well, at least we are in that frame, but finding ourselves thus located we ignore the elephants and focus on the things that make for ranting and raving. And that, ladies and gentlemen, is ‘science,’ alright?

We are in a burning room. Someone says, ‘we need to get out’ and does his utmost to carry out an evacuation effort, to the best of his ability, to the best of his knowledge. Funny thing: There are people inside the burning house throwing the would-be evacuator question-grenades: a) Are you sure the house is burning? b) Will I have a safe and comfortable dwelling if I were to leave the house? c) What is the guarantee that the alternative is a house that is fire-resistant?

The thumb-twiddlers and navel-gazers, the armchair critics and all may have fire insurance. They may be fire-resistant too, who can tell? They are welcome to test the worth of their insurance policies and the substances they have coated themselves with. They need not stand in the way of those who want to escape. They should not block the doorway with half-truths and theories specifically designed to ensure the well-being of the few at the cost of ill-feeding and impoverishing the many. Well, the earth itself, one might add.

There are blinders that should be celebrated. The one associated with Bhanuka Rajapaksa for example. We should not forget the etymology though: ‘make blind, deprive of sight and deceive.’