Nothing is forgotten, nothing will ever be 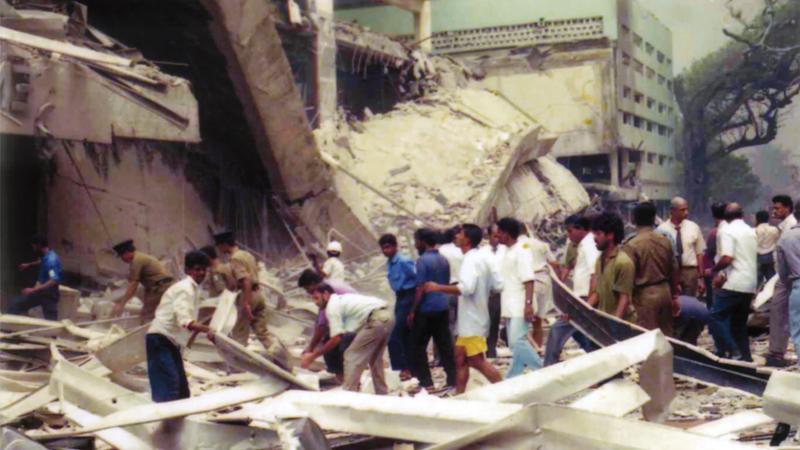 The LTTE Leader Velupillai Prabhakaran said Sri Lankan people remember things only for two weeks. It is not true at all. We, Sri Lankans remember things very well for ages. The specialty is we forget unimportant things easily, forgive and forget according to Buddhism but remember crucial things very well, for years. They are the things that matter. They have an impact on our precious motherland’s future and our future generation.

The Central Bank bombing was one of the deadliest attacks carried out by the Liberation Tigers of Tamil Eelam (LTTE) during the 30-year battle against terrorism. The attack took place on January 31, 1996, in the heart of Colombo. A lorry containing about 440 pounds of high explosives crashed through the main gate of the Central Bank of Sri Lanka, a seaside high-rise which managed most of the financial business of the country. As gunmen traded fire with security guards, the suicide bomber in the lorry detonated the massive bomb, which tore through the Bank building and damaged eight other buildings nearby. The lorry was followed by a three-wheeler, carrying two LTTE cadres armed with automatic rifles and an RPG launcher.

The blast killed at least 91 people and injured 1,400 others. At least 100 people lost their sight. Among the wounded were two US citizens, six Japanese, and one Dutch national. Most of the people were bystanders or civilians manning small shops set up near the Bank. While the bomber Raju died instantly, the backup team Subramanium Vigneswaram alias Kittu, and Sivasamy Dharmendra alias Raju, were apprehended by law enforcement on information provided by the public.

Until 2006, the Central Bank bombing was the deadliest LTTE attack of the terror period. The attack was mainly carried out by three LTTE cadres. While one of them died immediately the rest were taken into custody by the police. The suicide bombers were Raju (main bomber), Subramanium Vigneswaram alias Kittu and Sivasamy Dharmendra alias Raju. Immediately after the bombing several tourists and local and foreign travel agencies received calls from the Ellalan Force, a front organisation of the LTTE, to boycott Sri Lanka.

According to an article written by C.P.A. Karunatilake, Superintendent, Currency Department (2010) to the 60th Anniversary Commemorative Volume of the Central Bank of Sri Lanka: 1950 – 2010:

It was a Wednesday. With the dawn of this business day, the Central Bank of Sri Lanka (CBSL), was awaking to another busy day of hard work to provide a stable economic environment and professional guidance for the nation to strive for prosperity. As usual, people were flocking to the cash counters with busy cashiers to meet their needs with respect to cash and payments.

The day was still young, and every pulse of the Bank was moving with its usual busy rhythm when suddenly it was disturbed with sounds of firing bullets around the CBSL premises. Some of those in the building, without knowing exactly what was happening, peeped through the windows with curiosity. Those who were outside the building were terrified at what they saw.

LTTE terrorists were trying to enter the Bank premises with a lorry laden with a huge load of explosives to destroy the heart of the country’s financial system with the aim of paralysing the whole economy. Fortunately, they were not successful in entering the Bank premises, thanks to the barriers constructed during the late Dr. H N S Karunatilaka’s Governorship. Had they been successful, the story would have been a horribly different one, perhaps written by another writer. To the horror of all, the deadly bomb exploded outside the Bank premises around 10.50 in the morning with a trembling thunder that shocked the entire Fort area, he stated in his article.

The shock was felt within a radius of many miles. A deadly silence prevailed for a moment, as all were numb with the shock. Thereafter, those who panicked with shock and feared that more disasters were imminent started screaming. However, those who were courageous and able to manage themselves to face the situation guided the frightened colleagues to the rear exit doors and attended to take the wounded to hospitals without further delay.

A stream of people with cuts, wounds, and blood stains was seen climbing down through the emergency exits to move to safety, fearing that the whole building would be caught in fire, explode, and collapse.

Despite an imminent danger to their lives, there were many brave sons and daughters of the Bank who dared to go into the building to search, if any of their colleagues or visitors were trapped in and to help them out safely. It is worth mentioning that there was no central coordination of the rescue operation, and everyone who felt the need of their service offered it in whatever way they could.

Some officers were seen driving the Bank vehicles loaded with affected colleagues rushing them to hospitals. Since all the entry and exit gates at the ground level were blocked with rubble, the wounded had to be brought through narrow stairways at the back of the building, a difficult task.

Some were injured so badly that the rescuers could not even touch them and hence, they were brought down on window curtains, as stretchers were not available at the time. Some of those who are still in the Bank cannot even remember how they did it. “It is our inherited spirit that energised us there, nothing else I can think of”, one officer said.

According to the same article, on Thursday, February 1, 1996, all officers who were not hurt in the previous day’s bomb attack at the Head Office flocked to CBSL early morning. They were in high spirits, with enthusiasm, and determination to bring the Bank back on her feet soon and resume operations and make her presence felt to the nation.

The spirit of this sense of responsibility and commitment had amazed even some observers abroad. The Governor, A S Jayawardena, at a discussion with the writer, on his experience in the aftermath of the attack quoted a CEO of a foreign bank who paid him a visit of solidarity saying, “I cannot believe that your officers reported for duty the very next day. Had this happened in my country, people would not have even thought of reporting to work for weeks”. “Our strength is that spirit” the Governor commended with a high sense of gratitude.

Eleven LTTE members were charged with the bombing of the Central Bank, ten of them were indicted on 712 counts, including the intention to cause death and committing murder, destruction of state property by attacking the Central Bank, and provoking violence. In 2002 Judge Sarath Ambepitiya issued an open warrant to arrest the LTTE’s leader, Velupillai Prabhakaran in connection with the 1996 Central Bank bombing. The judge found him guilty on 51 counts and sentenced him to 200 years in prison.

According to some retired (victims of the brutal LTTE attack) employees of the Central Bank, some employees who had infants, toddlers and school going children lost their sight permanently on this dreadful day. They saw the faces of their beloved children for the last time on the morning of this horrifying day.

They never saw their faces again. Now those children are married and the retired employees who escaped death are their grandparents. But they will never be able to see the sweet faces of their grandchildren before they say goodbye to this world, one day. But their children and grandchildren will never face the same fate ever because of the brave sons of Mother Lanka.

The brutal terrorism of the LTTE ended on May 18, 2009 due to the heroic Security Forces under the leadership of then President and current Prime Minister Mahinda Rajapaksa and then Defence Secretary and incumbent President Gotabaya Rajapaksa. The heroic Security Forces sacrificed over 26,000 precious young lives to save the motherland. Several war heroes became permanently disabled.