No, Ranjan Ramanayake is not a hero 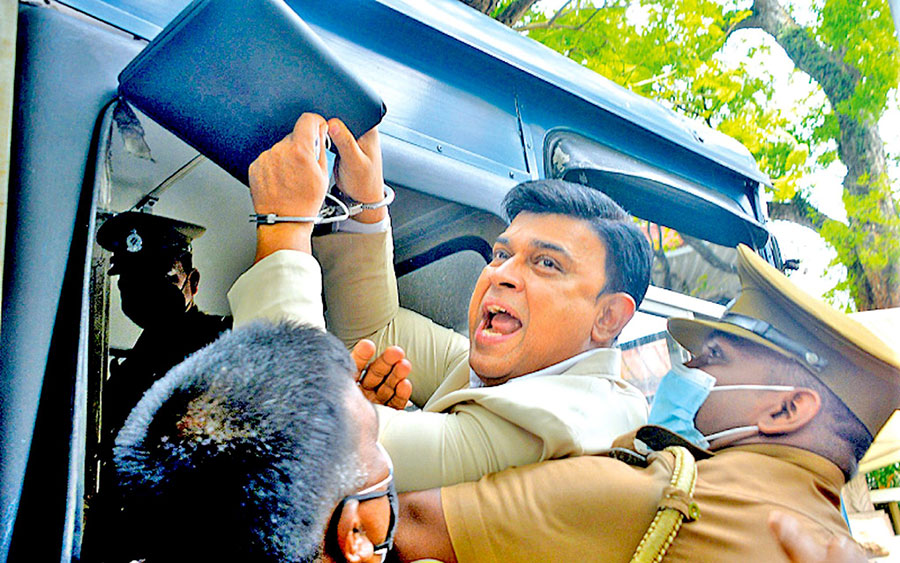 Sri Lankans are an emotional lot. They like conspiracy theories, and where they can’t find one they cook it up. The Ranjan Ramanayake verdict is a case in point. On the face of it, the ruling seems, if not reasonable, then at least straightforward. Here is the case of a man who point-blank called a majority of judges and lawyers corrupt, admitted in court that he did so, and publicly stated that he would never take back what he said. Construed as contempt of court, the nation’s highest judicial body found him guilty and passed a sentence in line with the finding.

A judicial pronouncement is different to an executive decision. Yet a vast majority of those commenting on the Ramanayake verdict don’t seem capable of making that distinction. This is significant, though also worrying, because such distinctions are important in a democratic society, even one as fragile as Sri Lanka. Then again, left-liberals in Sri Lanka have always been marked out, as Dr Asanga Welikala put it, by their inability to distinguish between legal theory and political practice.

By default, a judicial pronouncement is deemed to be free of political bias, based strictly and purely on points of fact and of law. Verdicts and judgments may not be to everyone’s liking, but if the catchphrase of the left-liberal crowd is “judicial independence”, forcing courts to dish out rulings compatible with particular ideologies would be not just detrimental but also antithetical to their campaign for a democratic society.

As a realist (political and philosophical), I tend to prefer the exigencies of the moment to the diktats of empty procedural justice. In this I agree with not just the sole realist intellectual in this country, Dayan Jayatilleka, but also legal scholars who have constantly highlighted the importance of accounting for extrinsic factors when passing verdicts and giving rulings; the critical legal theorists are a case in point here.

But this is not what motivates and pushes those who oppose the verdict. There’s hardly any analysis made, hardly any precedent cited. Indeed, no one seems to have read the judgment in the first place.

I saw several posts comparing Ramanayake to Vijaya Kumaratunga, of all people, and his imprisonment by the J. R. Jayewardene government. This is amusing. Kumaratunga was arrested, with no charges at all, on the flimsy grounds of being a Naxalite vis-à-vis emergency regulations. Ramanayake, on the other hand, was found guilty of a criminal offence – one to which he admitted more than once – by three judges, in a case filed four years ago at a time when he was in the government, serving as a Minister. These points are important because they tell us what the case is about, and how those who claim to stand for vague, amorphous, but laudable causes like justice and fair play have interpreted these terms.

What makes their already confused interpretation of the Ramanayake case and verdict even more confusing is the link they try to bring up between the contempt of court offence and those infamous tape recordings of his on the one hand, and the court’s ruling on his case and similar rulings on government MPs – particularly Pillayan and more particularly Premalal Jayasekara – on the other. Here too the devil is in the detail. The case has nothing to do with the tape recordings, even if they do colour our perceptions of Ramanayake. The judges did not even once bring up those recordings, nor did they refer to his outrageous expostulations regarding other professions, including his own.

The Pillayan-Premalal rulings are unfortunate. But in neither of those cases was, or is, explicit government intervention visible: Attorney-General de Livera let Pillayan off the hook for lack of sufficient evidence, while Premalal was allowed to sit in parliament pending the Supreme Court’s determination on his appeal.

The point to note here is that these issues are or rather should be viewed separately from the Ramanayake case. Social media activists and justice warriors making their voices heard over the latter are taking the wrong approach as far as their defence of the man they’ve turned into a hero and a martyr goes. You do not valorise a man for a crime he committed by bringing up whatever good he did; you valorise him for a crime he did NOT commit, for which judges have erroneously found him guilty.

In that sense Ramanayake’s parting words – “I said the truth and I will never apologise for it” – seem a tad too facile, not least because a cursory perusal of his case will make it clear that the determination depended on a) the accused taking back what he said, i.e. that a majority of judges and lawyers are corrupt, and b) statements made after the first which directly contradicted that disclaimer.

In a world of embellished factoids and half-truths, it comes as no surprise that Ranjan Ramanayake’s defenders should construe statements like these as references to ruling elites and corrupt MPs. Yet they cannot be, and must not be, interpreted as such. Mr Ramanayake refuses to apologise for a statement for which he was found guilty by the Supreme Court of Sri Lanka, a statement which brushed off an entire profession as corrupt. He was not, by any stretch of the imagination, referring to ruling elites.

I do not consider Ranjan Ramanayake a hero. He has more than once spoken out against corruption, but that is, as far as I am concerned, an extension of his populist movie performances. To consider him being sent to prison an act of martyrdom would be to insult every other rights activist, journalist, and decent human being who has been, here and elsewhere, then and now, imprisoned without the privilege of a formal charge, outside the judicial system. I hence consider Ramanayake’s ruling on par with the Pillayan-Premalal rulings: all three have been afforded the luxury of court hearings and judicial opinion. These hearings and opinions might not be to everyone’s liking, but then we should not try to make every hearing, and every opinion, amenable to our peculiar sense of justice.

Mr Ramanayake appeals to the social media pro-democracy middle-class crowd because he has gone through the easy way of critiquing “the system.” As a critic of the establishment, however, he puts not just Noam Chomsky, but also Slavoj Žižek, to shame; I will outline how and why in a later essay. Suffice it to say, for the time being, that many of those who harp on about Ramanayake and shed tears for him would likely look the other way had it been, say, a radical activist. Such are the vagaries and ironies of social media middle-class activism, in this blessed land of ours.