No compromise on Sovereignty 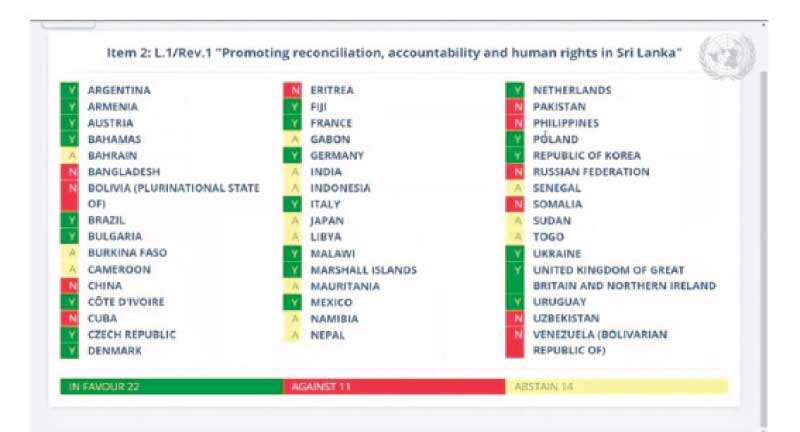 Ending an unnerving month-long wait, the 46th United Nations Human Rights Council (UNHRC) Session culminated in Geneva yesterday with the adoption of yet another Resolution on Sri Lanka sponsored mainly by the Western bloc amidst strong lobbying for and against it till the eleventh hour.

The Resolution on “Promoting reconciliation, accountability and human rights in Sri Lanka” tagged ‘A/HRC/46/L.1/Rev1’ was adopted by the 47-Member UN Inter-Governmental body with 22 votes in favour and 11 votes against. Fourteen Member States abstained from voting.

In hindsight, it could be seen that the Government chose to keep national interests at heart and accept defeat in a dignified way than co-sponsoring a Resolution that might open doors for unwanted interference on the country’s domestic affairs.

As the 46th UNHRC Session was held with virtual contributions in the wake of the global COVID-19 pandemic, a newly introduced e-voting system was in place. Keeping to their promises, Pakistan, China and Russia sided with Sri Lanka along with the Philippines, Eritrea, Venezuela, Bangladesh, Bolivia, Somalia, Uzbekistan and Cuba during the vote.

After keeping Colombo and all international players in suspense till the last moment, the Indian Government abstained from voting validating the initial speculations about its position.

The United States (US), though not a current UNHRC Member, strongly backed the Resolution also indicating its desire to resume a prominent role in the Council in the future. The Resolution submitted by the Core Group on Sri Lanka led by the United Kingdom, Canada and Germany was able to muster over 40 co-sponsors including the US and Australia.

It was the eighth in a series of back-to-back UNHRC Resolutions on Sri Lanka within a span of about 12 years. The first Resolution was adopted by the Council at a Special Session on May 27, 2009, barely eight days after the formal end of the war against the LTTE. The then UN Secretary General Ban Ki Moon visited Sri Lanka during this period. The first four Resolutions in 2009, 2012, 2013 and 2014 were adopted by a majority vote against the will of the country. The next three Resolutions respectively in 2015, 2017 and 2019 were adopted with a consensus as the former Yahapalana Government chose to co-sponsor them, a decision that created ripples in domestic politics in the years that followed.

The adoption of the latest Resolution came against a backdrop where the incumbent Government had formally withdrawn from the co-sponsorship of the 2015 Resolution (30/1) and other consequential Resolutions.

The Government stood firm to protect the Sovereignty and Independence of the country and spoke openly and strongly against the Council’s discriminatory approach towards Sri Lanka. The Sri Lankan delegation to the virtual session was led by Foreign Minister Dinesh Gunawardena. The Sri Lankan diplomatic mission in Geneva together with the Foreign Ministry in Colombo stepped up lobbying efforts ahead of the crucial vote on the Resolution, which was pushed back by a day due to scheduling issues.

President Gotabaya Rajapaksa and Prime Minister Mahinda Rajapaksa personally threw their weight behind the canvassing to garner the support of the countries which were on the fence. While President Rajapaksa took his time to directly call Indian Premier Narendra Modi and Organization of Islamic Cooperation (OIC) Secretary-General Dr. Yousef Al-Othaimeen, Prime Minister Rajapaksa dialled up Prince Salman bin Hamad bin Isa Al Khalifa, Deputy King and the Prime Minister of Bahrain, to rope in its support to defend the country at the Geneva-based Council.

At the same time, PM Rajapaksa taking part in the Golden Jubilee celebrations of Bangladesh’s independence from Pakistan last week in Dhaka met his Bangladeshi counterpart Sheikh Hasina and sought her Government’s support at the UN Human Rights body. This was confirmed in the joint communiqué issued after the visit and true to its word, Bangladesh voted against the Resolution.

Ahead of the crucial vote at the UNHRC, the Government, however, sent mixed signals due to the sudden proposal to ban the burqa and the niqab and the mandatory cremation policy of those who succumb to COVID-19. Understanding that these distracted the support of Muslim nations, which constitute about one-third of the Council, the Government clarified that it would not proceed with the face veil ban without arriving at a consensus through broad consultations with all stakeholders and facilitated the burial of Muslims who die of COVID-19.

When it came to India, it kept the decision on the Resolution on Sri Lanka close to its chest until yesterday afternoon well aware of the complicated nature of the matter at hand and that many eyes had been pointed in its direction to take a hint of its position on its immediate neighbour. With the Tamil Nadu Legislative Assembly Election round the corner (April 6), the Indian Government was seemingly caught between the devil and the deep blue sea when deciding its course of action with regard to Sri Lanka as it had to manage domestic political pressures on the one hand and deal with the nuances associated with its foreign policy on the other.

The Indian Media on Saturday reported that Indian National Congress (INC) Leader P. Chidambaram as well as Dravida Munnetra Kazhagam (DMK) Chief M.K. Stalin urged Premier Modi “to show solidarity with the Tamil people by calling out Sri Lanka for alleged human rights violations at the UNHRC”. Several other Tamil Nadu politicians also joined in the bandwagon demanding the Indian Government to vote for the Resolution.

At home, the Tamil National Alliance (TNA) led by R. Sampanthan together with other Tamil political parties in the North pinned hopes on India to support the Resolution. However, TNA Spokesman M. A. Sumanthiran speaking to The Hindu last week admitted that “one cannot go to the International Criminal Court (ICC) without the cooperation of Sri Lanka” as it requires a referral by the UN Security Council, where the five Permanent Members have veto power.

On the other hand, the Tamil diaspora groups sympathetic towards the LTTE were seen restless even before the Session kicked off. They dangled a carrot in front of their political representatives with the sizeable vote bank they have in Western countries to persuade those Governments to vote for the Resolution.

The Resolution, while welcoming the latest report on Sri Lanka by United Nations Human Rights High Commissioner Michelle Bachelet, emphasizes “the importance of a comprehensive approach to dealing with the past, incorporating judicial and non-judicial measures, to ensure accountability, to serve justice, to provide remedies to victims, to avoid the recurrence of violations of human rights and to promote healing and reconciliation”.

The Resolution gives the green light to establish a central database of evidence managed by the Office of the High Commissioner for Human Rights (OHCHR) for the purpose of future prosecutions against those held responsible for alleged war crimes and human rights violations. As reported by the media, the proposed mechanism would cost over US$ 2 million.

The UN Human Rights Chief in her Report, which was formerly presented to the Council on February 24, called on the Member States to consider “the referral of the situation in Sri Lanka to the International Criminal Court”, and other drastic measures such as asset freezes and travel bans against those who had allegedly committed human rights violations after investigation and prosecution in their own national courts.

The wording of the Resolution indicates that it does not have faith in the recently appointed Presidential Commission of Inquiry (PCoI) to go through the findings of the previous commissions and committees to determine whether there had been any breach of International Humanitarian Law (IHL) or human rights violations and report with recommendations.

Notably, the Resolution refers to the 13th Amendment to the Constitution and calls upon the Government to “fulfil its commitments on the devolution of political authority” and hold the Provincial Council (PC) Elections.

The final paragraph of the Resolution makes it clear that there is no closure of the topic in the immediate future. The close scrutiny of the UNHRC on Sri Lanka would continue at least for the next 18 months.

Then again, the Government by refusing to back down without a fight till the very end showed that it was not ready to easily give in to undue external pressure, and that stance enabled it to walk away with its head held high at the end of another arduous Geneva Forum.