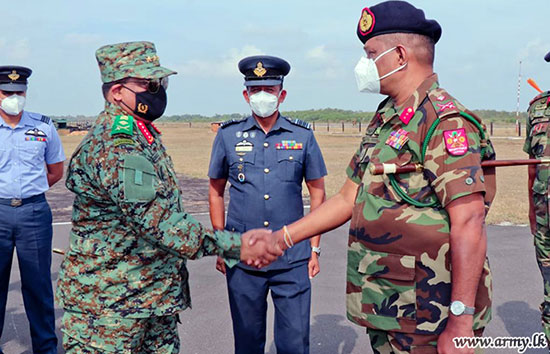 More than 1,600 young men and women from the Tamil community had already joined the Army during the current recruitment drive, Army Commander, General Shavendra Silva said, addressing the troops in Jaffna.

General Silva toured the Northern peninsula during the Sinhala and Tamil New Year period. During his visit he met members of the tri-forces and residents of Jaffna.

The Army Commander said: “This shows that youth in all communities have a great faith in our institution. This also shows that these youth have a desire for true reconciliation and have seen through various obstacles placed on their path by various groups that want Tamil youth to remain angry and insular.”

The Army Commander said that the actions taken by the security forces, during the COVID-19 pandemic, had particularly changed the perception many youth in the North and the East had about the forces. Over 7,000 security forces personnel had been deployed in anti-COVID-19 work in the Jaffna peninsula alone, he said.

After addressing the troops, General Silva gifted mementos to three military personnel, representing the Army, the Navy and the Air Force. The General also handed over several vehicles, repaired by the 4th Sri Lanka Army Electrical & Mechanical Engineers (SLEME) for the use of Security Forces Headquarters – Jaffna (SFHQ-J.) These included refurbished heavy vehicles, trucks, tractors, bicycles and a three-wheeler.

Later, a discussion with Security Forces Commanders of Jaffna, Kilinochchi and Mullaitivu took place to discuss the pandemic situation, precautions to be taken, concerns of civilians, security matters, etc.

The Army Commander handed over a house to a widow on Nawalar Road, Jaffna; her husband was killed during the war. The Army built the house under an initiative to provide houses to the needy in Jaffna.