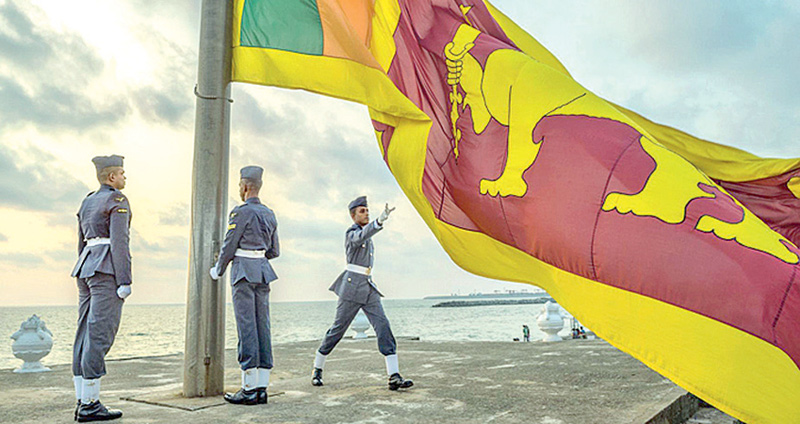 It was July 24 in 1996. The time was around 5 pm. I was having tea with my mother at home at that time. I did not have any lectures to attend at the Sri Jayewardenepura University. Boom….a very loud sound – I was shocked with fear. My mother told me “Putha…..that sound does not seem good. It should be a huge LTTE bomb attack. It is good to have you here with me right now. Otherwise, I will die from a heart attack.” We waited some more time and then went out to lock the gate so that we could watch television to get more information. But we could not lock the gate as we expected. The entire village was running towards the main road while mourning. They were screaming. “I just received a phone call. The train that my son was travelling on had been bombed….. Oh! My daughter also travels on this train……my husband’s phone is dead………my wife’s phone is ringing but no one answers.” On television, we saw bodies split into pieces in pools of blood, burnt clothes and also broken shoes.

But, today, only the people who lost their loved ones, limbs, eyesight etc. on that dark day remember the incident. That was much scarier than COVID-19. We did not have any reliable ‘set of guidelines’ to protect ourselves from the LTTE bombs. The set of guidelines were made by the people themselves. The very basic guidelines included husband and wife not travelling or being together in the same bus or train, or anywhere at the same time, being vigilant on parcels and bags without owners, sudden instructions to collect all parcels and bags belonging to passengers in a bus or train in order to check whether there is a parcel or a bag without an owner, being vigilant on suspicious persons who travel in public transport attempting to mingle with groups of friends and familiar ones etc. It was very difficult to follow those self-made set of security guidelines than following current simple health guidelines such as wearing a mask, washing hands and maintaining social distance. Death was instant then. Unlike today, there was no time left to give oxygen. The worst part is living without eyesight and limbs etc. for the rest of the life with the assistance of another person. But no one loses arms, legs, hearing etc. due to COVID-19.

On the next day, July 25, 1996, I was sitting close to my grandmother. I was not in a good mood after yesterday’s evil incident which took away few lives that were close to my heart. After noticing my face for few minutes, my grandmother started to talk. She said “Putha…….do not worry. Be mindful all the time and save your life when travelling by public transport and when in public places. You all will be saved in a decade or so. The history repeats and accordingly, you and this country will be saved by a heroic son of Mother Lanka who comes from the South. Unfortunately, my grandmother could not live to see the lucky day on which her prediction became true. The entire Sri Lanka was saved on May 18, 2009, by heroic Armed Forces led by the then Defence Secretary and the current President Gotabaya Rajapaksa and the then President and the current Prime Minister Mahinda Rajapaksa.

On May 18, 2009 night, we Sri Lankans went to bed with the assurance of having a good sleep. Before that day, for 30 long years, we went to bed every night, but could not sleep at all. We were worried about the next bomb that would go off somewhere in Sri Lanka killing hundreds of people while injuring many others. That is what we need to stress today and forever making our children, unborn generations and the entire world aware of the importance of eradicating all types of terrorism. But then, children born after 1990 started to see certain fabricated things on television, especially during news telecasts between 2015 and 2019. What they saw and heard was how some handcuffed War Heroes were taken to prison, how so-called human rights activists speak to media on human rights violations that occurred before May 18, 2009, etc. The generation born after 1990 may be confused about the individuals and incidents because they know nothing about the true history of Mother Lanka (before May 18, 2009). This part of history should be made available to young people to find and read easily. It should be included in the school syllabus as well.

The time has come to include the true history of Mother Lanka in the History books of our children. Learning history before May 18, 2009, should be made compulsory for all schoolchildren. All Sri Lankan citizens should learn the true history of Mother Lanka which has evidence for every single incident. We should not let our children to learn the fabricated history of our Motherland – the history fabricated by so-called journalists and human rights activists who got paid thousands of dollars to do so by NGOs – the history which does not have any real concrete evidence.

We must tell the children who were born after 1990 about the true status that existed in Sri Lanka before May 18, 2009 – how bombs went off all over the country killing thousands of innocent people. How a handful of Sri Lankans assisted terrorists through whatever they did while the entire nation and majority of media pushed the country forward encouraging our War Heroes to rescue the country from the barbaric LTTE terrorists who had many aircraft, ships, modern arms and especially their three ‘armed forces’. Our children should know the ‘unofficial country’ located in Sri Lanka before May 18, 2009, and the villages threaten by the LTTE. Our children should know the real heroes of Mother Lanka and the handful of traitors of the country. Otherwise, we will not be able to walk towards a prosperous and united country.

It is interesting to see how Maha Sangha protected the country and the people during the LTTE terror period which lasted for 30 long years. One of the main tasks done by Maha Sangha during the LTTE terror period was protecting villages located close to LTTE-controlled areas. The Maha Sangha did not vacate their Buddhist temples and run away in fear of the barbaric terrorists. They stayed in temples in the middle of death threats protecting the people who lived in those villages. They did not sleep or have ‘dana’. They did not have any other comfort. But they did not give up. They gave the strength to the people and the Armed Forces to fight against the barbaric terrorists who killed infants, pregnant mothers, the elderly, the sick and the disabled. What was protected by Buddhist monks was not limited to human lives and the land. They protected priceless historical archaeological sites as well. Protecting crucial archaeological sites was very important because the LTTE was trying their best to tell the world that they are the original ‘owners’ of Sri Lanka and they were the original citizens of the country.

On May 26, 1995, Kithalagama Sri Seelalankara Nayaka Thera, popularly known as Dimbulagala Hamuduruwo was killed by the Liberation Tigers of Tamil Eelam (LTTE) when he was on his way to visit a farm belonging to the temple. He provided moral support to the poor people living in villages to fight LTTE intrusions into their villages. He was the chief Sanghanayaka of the Northern and Eastern Provinces and Tamankaduva area at the time of his death. Sri Lanka Post issued a postage stamp on July 21, 2005, to commemorate his valuable service to the nation.

This is the era we passed. This is the era that was ended by our heroic Armed Forces led by the then Defence Secretary and the current President Gotabaya Rajapaksa and the then President and current Prime Minister Mahinda Rajapaksa. We live unharmed today because of them and the heroic Armed Forces which sacrificed over 26,000 precious lives for the country, and also their limbs, eyesight, hearing – In other words, everything they had. They are still fighting to protect us in the midst of COVID-19 and other natural disasters. Our fathers, brothers, and mothers come home after work in the evening because of them but their children are still waiting for them to come home without knowing that, sometimes, they may never come. Names of fallen heroes etched at the War Memorial in Battaramulla

An attack on Fort Railway Station