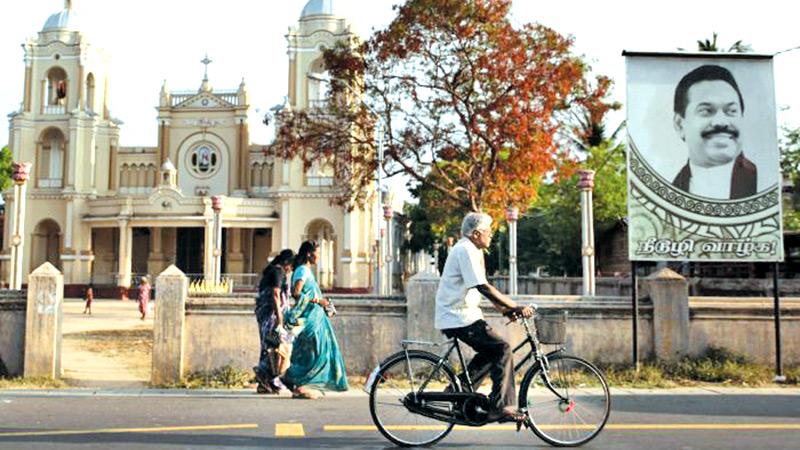 It’s the end of history for Tamil politics, they say — or the Tamil politics as we knew existed. Mapping out the details may be the role of the subject experts who know their ITAK from their TNA to a fault. I take a bow to DBS. Jeyaraj, Kumar David and others on that score.

But, does the August 2020 election signify the fact, as regards the Tamil political cohort that the more you try to control something, the more it controls you?

Tamil politicians had a streak of the control-freakishness in them no doubt. It may have been the legacy of the extent of control the late LTTE leader Velupillai Prabhakaran exercised over the Tamil people of the Northern and Eastern provinces.

The control by civilian politicians that followed was measured in terms of how the Tamil people, when they were asked by their leadership to jump, asked how high, and took off.

That ended, partly because Basil Rajapaksa the maestro of the SLPP victory this month had decided that the party led by the Rajapaksas and representing essentially the Sinhala nationalist sentiment, cannot lose any more.

So, clinically, every loophole and trapdoor that would possibly lead them to future election losses was identified, and closed shut. There were scores of things that were looked into, and there is a video of a meeting held by Basil Rajapaksa in which he addresses some of the rural party faithful and is seen telling them, poignantly, “we can’t lose elections anymore, period.”

Today’s political alignments and political appointments in the largely SLPP government are not happenstance. ‘Cannot lose anymore’ is written into the core of every detail of the post November 2019 governing paradigm of the SLPP. Gotabaya Rajapaksa’s apotheosis is in itself no doubt due to this strategy of closing shut any — any and all — possibilities of losing future polls.

There is your story or at least part of the story about why Tamil politics of control and domination by a largely absentee Tamil elite who stood for election in the provinces, largely ended in August, 2020.

This, was waiting to happen, and if it happened courtesy Rajapaksa and the SLPP’s quest for a break in the monotony of Tamil politics, its genesis is owed to more natural developments.

After the conclusion of the battle against terrorism Tamil political history ended, and it had to end — that was inevitable. This is reminiscent of the politics of ‘youth’ after the macabre JVP troubles in 1989. It’s not an exact match, but how the obsession with youth politics ended in short order when the ’89 insurrection ended, has some parallels with the end of history for Tamil politics in August this year. A guilt-ridden government had youth problems on their mind when the ‘89 armed rebellion petered out. The government of the day appointed a so called Youth Commission which was rather undistinguished if not pedestrian, but these tasks were undertaken with such a sense of purpose that it was thought that youth politics will be the single important issue in the Sri Lankan political firmament for the next hundred years.

But the Youth Commission deliberated, society went into paroxysms of guilty atonement about the plight of young people, and then the Commission report gathered dust. Before one election cycle had ended, the obsession with youth politics had vanished to the extent that youth — as a collective — disappeared back into the woodwork, never to appear as a force with any reckoning in local politics in the future that followed.

After the conclusion of the battle against terrorism Tamil politics ended in the identical cul-de-sac, but there was a reason, and it was the way the Tamil political leadership considered the mass of provincial Tamil folk as part of the plantation. They were supposed to do what was dictated to them in the way slaves were supposed to carry out their masters’ bidding in the cotton plantations of the US. But plantation politics died on August 5, 2020, for the most part due to the arrogance of the Tamil political elite who essentially in demeanour demanded servility and near tribal obedience.

So, for anyone who wanted to dive in and take apart that plantation vote, the simmering resentment towards Tamil master-servant political dynamic was there as slim pickings. Credit to Basil Rajapaksa for seizing the opportunity and ending history. This is the broad brush stroke analysis. A detailed deconstruction will reveal other undercurrents but this big picture is what’s important.

This writer remembers the day he met Sumanthiran at least ten years back and told the latter how he should try to grow up a tad and measure up to the stature of some of the Tamil political giants of the past. He asked who I had in mind, and was somewhat delighted that no names were named for him. But Chelliah Kumarasuriar should have been mentioned except that if I did mention him on that occasion the naming would have been met with a sneer.

Sumanthiran would have told me that Kumarasuriar slaved in the Sinhala plantation. At that time he would have perchance been able to get away with that type of rude dismissal but not today. Tamil voters seem to have realised there is one plantation, and that’s the one their Tamil leadership condemned them to.

On the other hand, the appointment of a new Deputy Chairman of Committees to Parliament, Angajan Ramanathan from the UPFA National List, confirms that plantation life has ended in the best of settings, and there is nothing Wigneshwaran or some others can do about it. They can’t call somebody a traitor to the cause when the people have voted in spades for that wperson’s party.

With Sumanthiran of the ITAK on the other hand, people may think his bark is worse than his bite. But he’s judged not only by his pronouncements of conciliation towards the Sinhalese but also by his manner — the way he came up to Ranil Wickremesinghe or Lakshman Kiriella or both of them of the governing UNP in Parliament, and hectored them rudely during the 2018 constitutional fiasco, left TV watchers aghast, and most UNPers too had their jaws dropping to the ground at the sight.

Small wonder one might say, that Sumanthiran was fond of plantation politics in his Tamil constituencies. If it was just last year that the TNA propped up a Government, providing structural support for the limp and dying UNP coalition in 2019, the Tamil people were watching how all that turned out and they got nothing out of those elite trysts in Colombo where their plantation masters held the fort, and hardly took a sidelong glance at them when they laboured hard in the plantation just to keep going from one day to the next.

But it’s known that Sumanthiran also had the door loosely ajar and was fantasising about the possibility of working with a Rajapaksa government, but simply put, the Sinhalese would have none of that because they wanted no saloon door and gave the Rajapaksa government a two-thirds majority so that it could keep its self-respect intact.

The public service equivalent of Sumanthiran is Rajan Hoole and that Jaffna worthy gave the independent commissions such a bad name that these institutions are now one constitutional Amendment away from becoming a forgotten historical experiment. There are former Central Bank pundits. beating their breasts about the Commissions and their near-death status, but they cannot forget the fact that the people voted in large numbers to get rid of these institutions or at least some part of them obviously, with constitutional overhaul being such a large part of the SLPP election manifesto.

When you think about the end of history for Tamil politics or at least after the conclusion of the battle against terrorism, the myth of Icarus and Daedalus comes to mind.

This father and son duo attempted to escape Crete with wings made out of wax, but everything went south when they flew too close to the sun and the wax melted. Sumanthiran and others tried to dance where angels feared to tread, and there is so little wax on their wings now they can hardly lift themselves up to say ‘we used to come from Jaffna.’