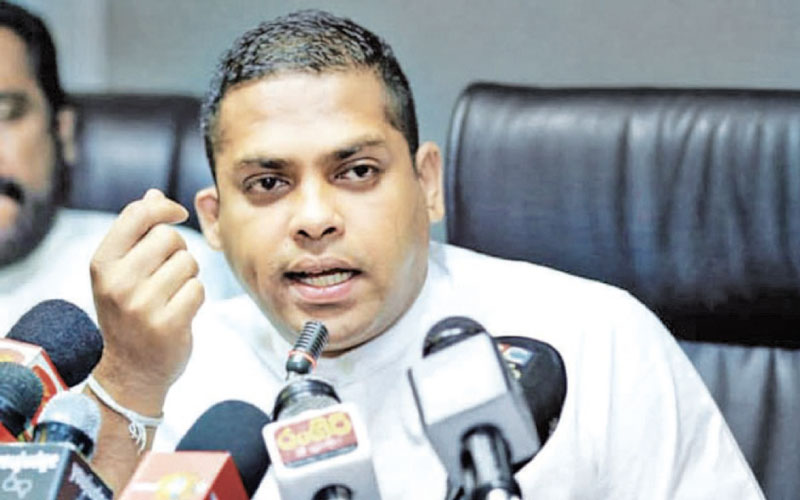 Harin knows stuff. About the Easter Sunday Attacks. He knew about it before it happened. His dad knew before he did. Doesn’t take much for the piya-senehasa to call for action. The son was duly informed. So that’s how Harin first knew. Well, we don’t know, really. That’s the first ‘knowledge’ he’s confessed to. Maybe he knew nothing before. Maybe not. He would know.

Harin knows stuff. Just the other day he talked of the CID having records of Zahran’s wife claiming that Zahran, before carrying out the deadly attacks, had met with intelligence officers. Well, he had to flush that claim down the toilet when Sarath Fonseka tabled transcripts of all statements made by the lady to various inquiring bodies.

Weerasekera, mentioned in passing that Harin, when called to issue a statement had promptly ‘fallen sick’ and got himself admitted to a private hospital.Weerasekera further said that Harin could read the said statements at the CID. He assured that Harin would not be arrested. He wondered, as an aside obviously, whether Harin might once again ‘fall ill’ and get himself admitted to some private hospital. That the CID harassed Harin’s sister by seizing her mobile phone when he ‘fell sick’ is known. Deplorable. It doesn’t absolve Harin from the charges of grandstanding, misleading and deliberately obfuscating things.

That above is an ‘aside’ too.

Back to Harin. He knows stuff. He claims that there exists a voice recording of Mrs Zahran where she claimed that her husband had met with intelligence officers. He claims that Cardinal Malcolm Ranjith and ‘some in the Vatican’ had listened to these tapes. Then he takes an insurance policy: ‘ I will not reveal as to where it is now because of security reasons.’
Security reasons, did he say? Wow! So this ‘key piece of evidence’ (in his book) is being kept hidden for ‘security reasons!’ What security? Whose security? Which century is Harin living in? Surely, the said tape could be circulated for one and all to listen to? Surely there’s enough technology around to verify whether or not it was indeed Zahran’s wife who is making the claim?

Halt! It’s a CLAIM. C.L.A.I.M. In legal circles that’s ‘hearsay.’ For example, someone might say ‘Harin thamai paasku irida prahaaraye mahaolakaru (Harin is the mastermind behind the Easter Sunday attacks).’ Does that mean he was? No, it’s a claim. It needs to be substantiated. That has not happened. And wait, we don’t even know if there’s such a taped statement. We don’t even know if indeed there was such a tape whether it was Zahran’s wife whose voice was recorded. Heck, even if there was a tape AND it WAS Zahran’s wife who made the alleged statement, that’s pretty thin ‘evidence’ to point fingers at anyone. If, for example, Zahran’s wife came on television and said ‘my husband met with Harin Fernando’ would Harin, following his own logic, confess to having a) met Zahran, and b) (following insinuation) confess to having played a mohamolakaru-type role in the Easter Sunday attacks? Would you, Mr Fernando? We think not.

Now. Then.
Zahran did meet prominent Muslim politicians frequently. In fact he wanted them to meet him. They did (not unlike how Prabharakan would summon TNA leaders back in the day). It’s not hush-hush stuff now. No ‘security reasons’ to hide behind. Will Harin, following his own logic, claim that the said Muslim politicians were part of the ITJ? That they, together with Zahran, formed the ‘Maha Mole’ (the big brain) of the Easter Sunday attacks? Harin’s father knew, so Harin said. The then President and the then head of the State Intelligence Service knew. The then Minister of Law and Order, Ranjith Maddumabandara knew. Who told them? And who told those who told them? Harin the Super Sleuth could track them down. Harin the Chest Beater and Champion of Ridiculous Claims could go to town on all this. He does not.

Why not?
There’s an ongoing process. Arrests have been made. People have been questioned. Some released for lack of any evidence to indicate any kind of involvement. Some have been enlarged on bail. Some have been indicted.

And yet Harin Fernando goes on a fishing expedition without bait and without equipment. He comes up with nothing except tall tales about fish he believes or rather wants us to believe are out there in the sea. Nameless fish. No, non-existent fish.

This is what Harin does. This is exactly what Fr Cyril Gamini did a few weeks ago and got himself into hot water. This is what Ranjith Maddumabandara did in trying to pull out Fr Gamini from the mess he had gotten himself into. Maddumabandara got dragged into the hot water. Muddy, hot water, really.
Why?
It’s all about conjuring a wild narrative. Why? Well, distracting the general public from what’s actually being done in concrete terms, perhaps. Tossing out red-herrings, perhaps? Throwing a dead cat on to the table, that’s possible too.

Wait. Didn’t the Easter Sunday attacks take place when Harin’s party was in power? Was the yahapalana government (in which Sajith Premadasa, Champika Ranawaka and others in the SJB including Harin held ministerial portfolios) clueless about Zahran and the NTJ (and of course the intelligence officers that Harin has dreamed up)? Is Harin essentially saying ‘we were downright dumb back then’?

One thing is certain and we apologize for misrepresentation: Harin is no mahamolakaru — not in carrying out terrorist attacks and certainly not when it comes to contributing to the cause of truth and justice. Even ‘kudamolakaru’ (in this respect) would be an overstatement.