Madeleine Albright Was a Killer 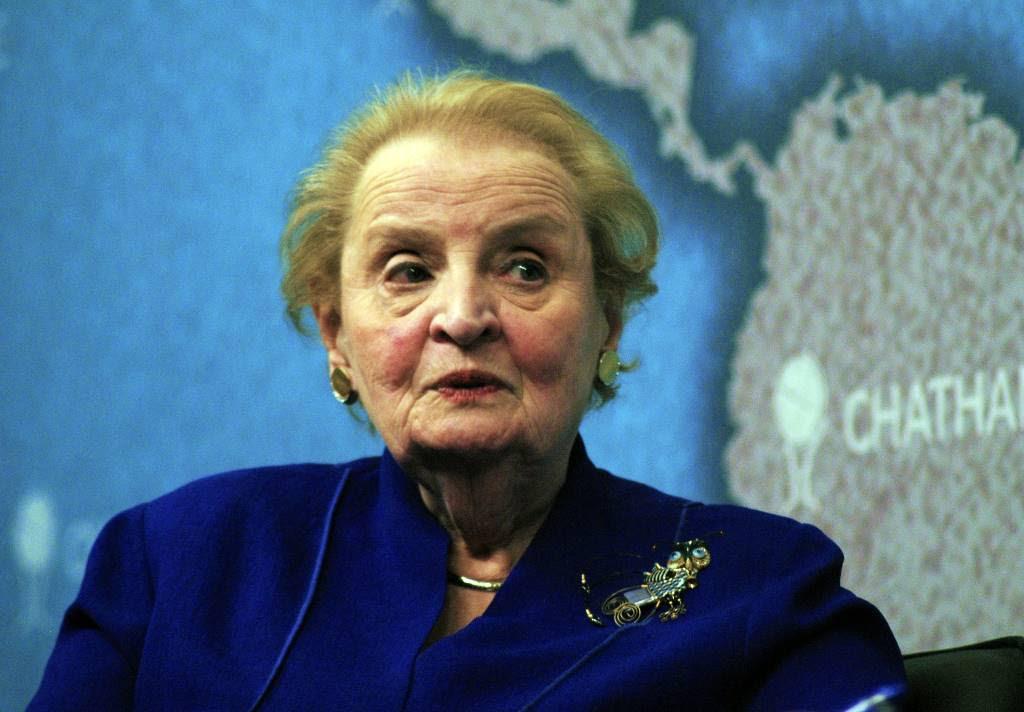 Madeleine Albright has died at 84. She was a pioneering imperialist who passionately advocated greater use of deadly violence in pursuit of a US-dominated post–Cold War global order — and killed many, many people in the process.

Madeleine Albright, who died Wednesday at the age of eighty-four, was America’s first female secretary of state. But the countless headlines touting that fact risk reducing her accomplishments to gender. That’s not fair: she was so much more than a trailblazer.

Albright was an imperial ghoul, as ruthless in her pursuit of American global dominance as any man. She played a central role in crafting a post–Cold War policy that wrought devastation on multiple continents. Her biography was a harrowing one: her family fled Nazi persecution when she was a child, and twenty-six of her relatives, including three grandparents, were murdered in the Holocaust. It’s a traumatic story, but rest assured: she presided over of plenty of trauma and death for others in return.

From 1993 to 1997, Albright served as United Nations ambassador. In that capacity, she presided over the brutal post–Gulf War sanctions on Iraq, with the aim of maximizing the misery of Iraqis so as to encourage Saddam Hussein’s overthrow. In a 1996 interview with Lesley Stahl of 60 Minutes, Albright seemed to suggest that the deaths of other people’s children were simply a cost of doing empire. “We have heard that half a million children have died. I mean, that is more children than died in Hiroshima,” said Stahl. “And you know, is the price worth it?” Albright answered, “I think that is a very hard choice, but the price, we think, the price is worth it.”

Although the mortality estimates Stahl was referring to have subsequently been questioned by researchers, Albright made it clear that she was quite prepared to inflict death on that scale. It’s hard to fathom the death of more than half a million children, and the refractory misery, for so many families, contained in that one statistic. Yet that was a “price” Albright was willing to extract from ordinary people in that poor country, where sanctions deprived Iraqis of medicines, clean drinking water, and essential infrastructure.

The Powell Doctrine — that is, the view of post–Cold War foreign policy advanced by Clinton’s Joint Chiefs of Staff chairman, Colin Powell (also recently eulogized here and not kindly) — was that the United States should limit its military interventions to situations in which its own national interests are threatened. Albright did not agree, and they clashed over what the US role should be in crises like Bosnia. Powell wrote in his memoir that he “almost had an aneurysm” when she asked him, “What’s the point of having this superb military we’re always talking about if we can’t use it?”

As UN ambassador, Albright drove UN secretary-general Boutros Boutros-Ghali from power after a relentless campaign, a sorry episode that sheds some light on her vision of the fin de siècle world order. Boutros-Ghali, whose tenure in office was supported by every country other than the United States, later attributed his ouster to his publication of a UN report arguing that an Israeli attack on a refugee camp in Lebanon, which killed one hundred people, was deliberate and not a mistake, contrary to the Israeli government’s claims. US officials denied that this was the reason, citing instead disputes over Rwanda, Croatia, and Bosnia. He had ruffled some Western ruling-class feathers by calling Bosnia a “war of the rich.” As well, Boutros-Ghali, an architect of the Camp David accords, saw Albright’s campaign against him as racist or xenophobic pandering to anti-UN Republicans (Bob Dole, for example, had taken to making fun of the Egyptian secretary general’s name: “Booootros Booootros” or “Boo Boo”), who were especially animated after fifteen US soldiers died in a botched UN peacekeeping raid in Somalia. Among other means of driving the secretary general from power, Albright falsely accused Boutros-Ghali of corruption. Writing in Le Monde Diplomatique at the time, Eric Rouleau suggested the real reason for Albright’s vendetta against her popular colleague:

The fall of the Berlin Wall had enabled the United States to conduct the Gulf War almost as it pleased and this suggested a model for the future: the UN proposes, on Washington’s initiative and the US disposes. But Mr. Boutros-Ghali did not share that view of the end of the Cold War.

From 1997 to 2001, Albright was secretary of state, under President Bill Clinton. In that much-celebrated groundbreaking role, she continued inflicting unimaginable suffering on the Iraqis. UN assistant secretary-general Denis Halliday resigned his post in 1999 in order to speak out against the sanctions; the US was “knowingly killing thousands of Iraqis each month,” he said at the time, a policy he called “genocide.” Although many Americans were shocked when the George W. Bush administration invaded Iraq, the reality is that when Bush came into office, the United States was already bombing Iraq, on average, about three times a week. That’s our girl! Just as warmongering as a man.

Albright also promoted NATO’s expansion into the former Soviet countries in Eastern Europe, a reckless trajectory that numerous high-ranking diplomats over the years have warned would inevitably antagonize Russia. That policy has contributed significantly to the terrifying potential nuclear conflict that we’re now facing, as well as the awful massacre of Ukrainian civilians (at least 977 for certain, as of yesterday, and the UN high commissioner for human rights believes the real number is much higher).

Albright never retired, a distinction that her fans will no doubt see as a badass rejection of ageism. But it would have been much better for the world had she taken some time off to bask in her considerable achievements. Her consulting company helped Pfizer avoid sharing their international property, although doing so would save lives around the world during the current COVID-19 pandemic. Vaccine patents remain a major cause of global vaccine apartheid and mass death. But it’s unlikely that this troubled her on her deathbed: the deaths of poor, brown people who aren’t Americans have always been “worth the price” to Albright.

During the 2016 presidential primary, she said of women (like this writer) who didn’t support the candidacy of Hillary Clinton, “There’s a special place in hell for women who don’t help each other.” She later apologized for the comment in an op-ed column in the New York Times, so I don’t want to be petty about it. After all, the Iraqi people never got an apology from her. But reviewing the evidence above, it was reckless of Albright to consign other women to that famous inferno.Almost certainly, there’s already a reservation in her name at that sizzling underground hot spot. Maybe there she will finally get the recognition she deserves, as a standout among murderous imperial warmongers of any gender.