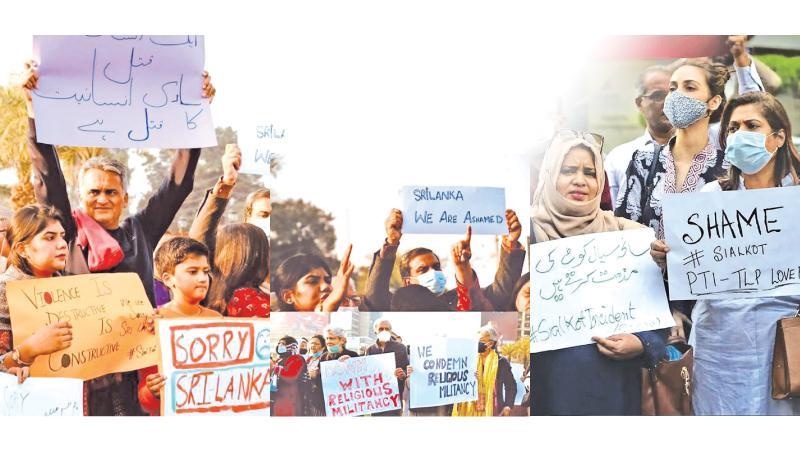 Last Friday, on December 4, Pakistan Prime Minister Imran Khan said that it was “a day of shame for his country”. The reason was the brutal lynching and burning of a Sri Lankan factory manager, Priyantha Kumara Diyawadana, in Sialkot, Punjab province, by radical Islamic mobs. In his Tweet message PM Khan said:

“The horrific vigilante attack on a factory in Sialkot and the burning alive of a Sri Lankan manager is a day of shame for Pakistan. I am overseeing the investigations and let there be no mistake all those responsible will be punished with full severity of the law. Arrests are in progress.”

Priyantha Kumara was a graduate engineer from the University of Peradeniya. He left for Pakistan in 2010 where he took up employment as an Industrial Engineering Manager in Cresent Textile, in Lahore. Later, in 2013, he joined the RajCo factory, Sialkot, a sports equipment factory as an Operational Manager, and had been working there for nine years up to this tragic incident.

Priyantha Kumara was accused of blasphemy-the reason given by the mob for the lynching.

According to initial reports, he had torn a poster pasted on the wall of the factory by a former banned terrorist group called TLP. The workers at the factory accused him of “tearing down Durood Sharif.”

Then, reports emerged that on this particular day there was a strike by a group of workers in the factory regarding a salary issue, and thus, some disagreeable party took revenge from him.

The gruesome video clips of this tragic incident shows members of the mobs dragging Kumara down, kicking him, beating him with iron rods and pelting stones, and then killing him instantaneously.

Finally, his body was put to the torch on the middle of a main road by the mobs, who later gave explanations in public for the lynching. Many in the mob made no attempt to hide their identity while some took selfies in front of the burning corpse.

However, this barbaric act shattered the whole world including Sri Lanka, India, and most of all Pakistan as soon as the videos and pictures of the incident flooded social media. Especially, Pakistani politicians, diplomats and activists began to express their shock over the gruesomeness of the murder and called on the Government’s attention to the rising extremism in the country.

While the incident was going on, one person among the workers at Sialkot factory, tried to save Priyantha Kumara’s life, though he couldn’t succeed against such a huge mob and video clips clearly show how he shielded Priyantha Kumara from the attack. And a day or two after the incident, we saw a considerable number of people that came on to the streets to demonstrate against the lynching – where they repeatedly voiced “Sorry Sri Lanka!”

The following are how activists, celebrities, journalists and other prominent people in Pakistan expressed views over the Sialkot incident.

Here is the reaction of Mahira Khan, a veteran actress in Pakistan: “Ashamed!! Sick to my stomach!! Looking at you @ImranKhan PTI for answers, for justice and to take away this menace from our country.” She wrote this on her official handle.

“Words fail me. We as a nation need to hold our heads in shame. Do we really want to live in a country where mob rule is the norm and not the exception? We look to Imran Khan for swift action to stop this now.”

Mansha Pasha, a leading actress, felt that it was high time vloggers and bloggers took a break from propagating a ‘soft image’ of Pakistan. “So, who’s the next vlogger who’s going to make feel good tourist adverts and proclaim how safe the country is for foreigners?” she sarcastically questioned.

Journalist Anas Mallick blamed radicalisation and insurmountable intolerance that is present in Pakistan as bellow:

“The amount of radicalisation and intolerance that has transgressed into the society can be very well measured by what happened in Sialkot – Absolutely horrific – Our heads should hang in shame.”

Another journalist, Raza Ahmad Rumi tweeted a video of the grisly act: “Horrific: A mob in Sialkot killed a sports factory manager of Sri Lankan origin for allegedly removing TLP posters. The videos of his lynching/burning are brutal reminders of state policies that have radicalised generations, normalising murders and mainstreaming radical groups.”

Disgruntled leader of Pakistan Tehrik e Insaaf (PTI) Jehangir Tareen has tweeted out his remorse and condemnation as follows:

“Deeply gutted at the gruesome act of violence in Sialkot! My heart goes out to the family of Priyantha Kumara. Our Prophet was the pinnacle of patience. To carry out an act of violence, that too in the name of Namoose Risalat, is a massive disservice to Islam.”

“Mob violence cannot be acceptable under any circumstance as state has laws to deal with all offences. Punjab Government’s action must and will be firm and unambiguous,” she tweeted. Author and activist Fatima Bhutto said every person in the mob should be tried for murder. Her opinion was echoed by Oscar-winning filmmaker Sharmeen Obaid-Chinoy.

“No one can be allowed to take the law into their hands and use religion as a justification. Sialkot is a terrible example that has to be addressed head on.”

And activist Usama Khilji called for the video of the lynching to stop being shared.

“Many users who saw the graphic footage found it traumatising and horrifying, with journalist Iqra Nasir saying the visuals will “haunt me forever”.

Writer and journalist Mahwash Ajaz remarked that with incidents like this being allowed to happen, the country was “doomed”.

Referring to the dozens of people recording the lynching on their phones, journalist Mehreen Zahra-Malik said “it’s terrifying that young men could beat a person to death in public, set fire to the body and then stand around for selfies. Something is truly sick and broken in Pakistan.”

Journalist Yusra Askari echoed the views of many when she wrote, “What have we become?” while commenting on the lynching.

Dr. Niaz Brohi, a leading ophthalmologist of Pakistan and a member of the Sri Lanka Eye Donation Society from Pakistan said it was a very heart touching thing over the Priyantha Kumara’s incident.

“Sri Lankan donated us eyes, but we have lost sight.” In fact, Pakistan is the largest recipient of eye donations from Sri Lanka – they received at least 35,000 corneas since 1967 according to Dr. Brohi.

These reactions from Pakistani people clearly show to what extent they are shocked over the incident, and how they are trying to overcome the religious menace in Pakistan. We should not think that all Pakistanis are religious fanatics in spite of these kind of rare events.

However, we are vigilant on what will happen to the barbarians that took Priyantha Kumara’s life in cold blood.