Loquacious ‘pro-Muslim’ campaigner in a soup 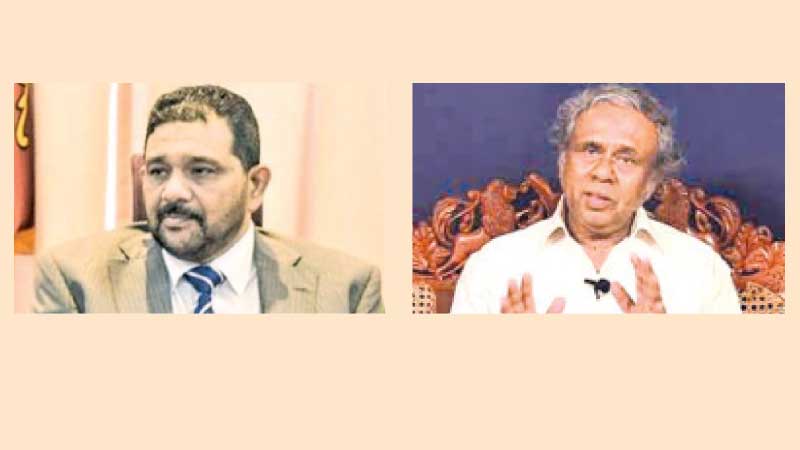 This article attempts to chart the current course of Sri Lankan politics within the meaning of the current dramas that engulf two people — Dr. Nalin de Silva and Azath Salley. Not that there is any similarity between these two personalities. Some would say Salley is an extremist but this does some disservice to extremists too.

In this writer’s view, Salley is no extremist — he is primarily an exhibitionist. Some have attempted to label Nalin de Silva an extremist too, but these are the types who would say the lion is an extreme animal.

Nalin de Silva has resigned as Ambassador to Myanmar saying that he has failed. Perhaps the Ambassadorship has failed him.

It is a position, at least in this country, in which people seek kudos, and eschew achievement. An Ambassador trying to achieve something is seen as a bit of a mad hatter — somewhat of a square peg in a round hole.

Someone had recently described Nalin de Silva as a philosopher. This writer does not see him that way. To me it seems he is more of a person that’s there. He IS — like the water, like the sky, he is existentially rigorous. The closest I can come to explain that, is to say that there is no artifice in the man.

He is not a North Star to the nation, because there is nobody in positions of power that quite follows him when they implement anything. He does not dabble in ideas, as far as I can see. He just says things as they are — and most people do not quite like people who spew the truth at them, though the current dispensation is the one that values him for his truth, which is closer to their own truth.

The main attribute of Nalin De Silva is that he has some sort of organic connectivity to the Sinhala Buddhists of this country, who seem to think that he a person with some innate organic sense of what it is to be a Sinhala Buddhist — even though in his own writings he often indicates that he is full of self-doubt, such as with reference to his performance in Myanmar.

But for a man who is a self-confessed self-doubter he has such firm convictions and that is a little paradoxical. That he was made an Ambassador to Myanmar in the first place is something of a vindication that life as we’d like to know it, is not dead yet in this country.

Of course now he has resigned from the post, and he says he failed. He does not lay down the law. He can be shy and retiring, and even if he is not really shy, he certainly seems the retiring type when he wants to be.

Azath Salley on the other hand is a person who seeks to be convincing with his verbiage and not his behaviour.

He says he will follow the law of Mohamed the prophet and not the law of the land, or words to that effect. He is out of step with his times, because he certainly does not seem to be espousing the cause of Muslims.

He always espoused a cause for himself. It is not surprising in the least, because he is a politician, and politicians tend to do that.

Also, he is trying to be relevant. Politically, Azath Salley became a dead letter.

He is essentially an attention seeker, who is desperate to martyr himself, and in that context it is probably best that he is not given an opportunity by being indefinitely in custody — provided of course that he did not have anything to do with the heinous Easter Sunday attacks.

The proximate cause for his recent arrest of course has been the speech that he made, in which he abrasively called for Shariah law and then went into say that he does not obey the laws of the State, or words to that effect.

These are rabble-rousing statements — but the Muslim community has more articulate spokespersons than this person who is struggling to stay relevant.

They would make the case for Muslim law, at least the partial application of it, more dispassionately and with some measure of finesse that Salley wholly lacks.

The strident cry of one country, one law will very probably not mean that all aspects of personal laws would be done away with. Unfortunately, that is the idea that some ordinary folk have acquired about personal laws. They think that getting rid of all personal laws would signify some sort of ‘levelling of the playing field.’

The odious aspects with regard to child marriages, etc., have to be got rid of first, and the most articulate against these laws have been women, in particular, from within the Muslim community.

Folk such as Salley ignore all these aspects and try to polarize the community by trying to whip up anti-majority sentiment for personal political gain. In essence, that is what the man is up to, and he has to be called out for it.

His ‘act’ is for political relevance, with his attempts to piggyback on the issues that have surfaced after the Easter Sunday attacks in particular. The only way he thinks he can be successful in that mission is to target the majority community by saying, or at least implying ‘Sinhala chauvinism.’

Salley seems to be proud of the fact that he “stuck to his guns” but when he was arrested with a pistol in his possession, it appeared that the gun stuck to him.

On the one hand, the man has to some extent at least, shown that the Sri Lankan Sinhala majority is tolerant because this is not the first time he shot his mouth — but he dared do it again and again, until he pushed himself to the limit. Dr. Sarath Weerasekera is getting about the task of apprehending those who have some involvement with the Easter attacks with clinical precision. He will take his time, and he is up to the task.

It is not to say that Salley is definitely involved, but that is for the sleuths to find out and until then Salley would have to keep a civil tongue, fond though he may be of taking verbal broadsides at the majority Sinhalese.

Temperamentally, Salley and Silva are polar opposites and there is no comparison — except just that this article is about two people who made the news last week.

Dr. Nalin de Silva has said that the news of his resignation shows the smallest development makes the news — but as for Salley, there is no doubt he made the news because he desperately wanted to, but he pushed a little too far and got himself in the slammer.

There is much that Nalin de Silva could do, even when he returns home. He seems to be saying that he is not an achiever — but that is his achievement, that he has contributed to the national discourse though he has been to a large extent, above the fray. He is a sounding board for society at large, and no doubt he will be comfortable getting back full time to that role he is familiar with.

As for Salley, it is doubtful he has written anything in his life. Not that anyone has to write, but may be if he was laid back and took up some penmanship, he would not have to inflict his dysfunctional persona on others, including I suspect a lot of Muslims, who would prefer more strategic spokespersons for their cause than this loose cannon Salley, whose modus operandi is of the bull in a China shop.