Liberal intellectual assumptions about our China relations are wrong 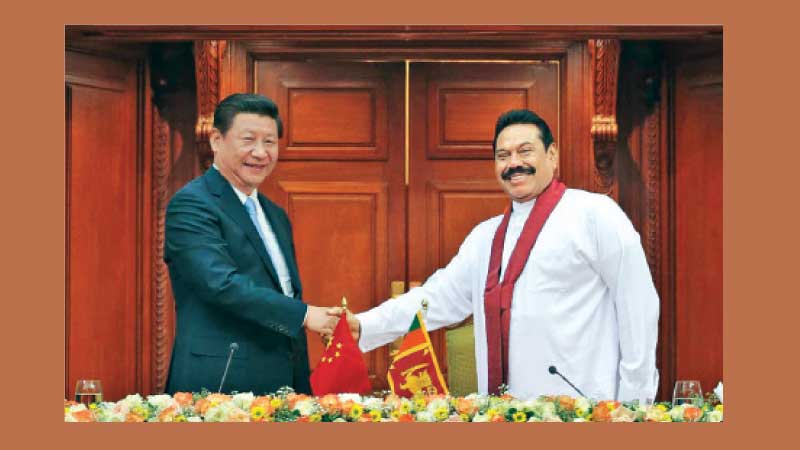 “The liberal world order established by the United States post the Second World War, still holds a ground in the contemporary world but its basic tenets are slowly fading away.”

So writes Heena Samant, a Delhi-based Phd. holder from the School of International Studies, Jahwaharlal Nehru University (JNU), New Delhi. The so called “liberal international order” was created after the cataclysmic events of World War II, proving once more that tumultuous events are needed to create paradigm shifts and sea changes in the way countries interact with each other — with various power blocs reaching certain stages of equilibrium.

Now, as the researcher Samant observes, the fundamentals of the world order created as a consequence of the power dynamics resulting from the World War, which took shape with key events such as the Potsdam Conference, are changing irrevocably, and the reason is Covid.

These developments have a profound impact on countries such as Sri Lanka. German Chancellor Angela Merkel has said that the Covid pandemic is the greatest challenge the world has faced since WWII.

‘Tumultuous event’ is an understatement. Notwithstanding the actual potency of the virus, and the real damage in terms of deaths that it inflicts on the globe, the reaction to the Covid pandemic has been treated as the pivotal event after the liberal world order under American patronage was created.

It’s widely believed therefore that there would be a new world order created upon the ashes of the pandemic. The shape this new arrangement of global power dynamics takes would have a profound influence on countries such as Sri Lanka, and others similar to ours.

This is especially important when our relations with the world’s number two economy China has increasingly come under the crosshairs. Opinion makers have said the way we are forging ties with China is fundamentally flawed because our China ties will come back to haunt us. They have given reasons. They have said that the way we engage with China would antagonize the rest of the world, or at least they have inferred that.

But very soon, we will not have the old China, and soon enough we won’t have the old world order even, as everything is in a tremendous state of flux due to Covid, which is a paradigm shifting event in world affairs.

We are at the cusp of a New World Order, and most experts agree on that. Novel dangers have been recognized because of the pandemic, and these are quite different from the perils that faced the world after the tumultuous events of WWII. That means the New World Order would be based on different realities, and these would make the new global arrangement strikingly different from the liberal international Pax Americana dynamic that characterized international relations in the aftermath of World War II and decisive summits between the big powers such as Potsdam that followed.

So in effect those ‘experts’ who try to predict the trajectory of our China relations through the lens of the world as we knew it, are unaware that they are engaged in a fool’s errand. At best they are trying to predict the weather based upon what the hit songs were last week — i.e., making a connection through the agency of things totally unrelated. It’s going to bring them grief when they find out that their gazing at the crystal ball was a mere hallucination.

The post Covid World Order will not be based on so-called liberal imperatives that shaped the world after Potsdam. The world has had shock therapy. It is much like the situation the global order was placed in after the transformative carnage of the two World Wars.

Nation after nation has learnt that liberalism and political equations related to war and peace and a liberal world order or a need for such a global order, are not the important considerations of our time. Conventional wisdom and the commonly accepted realities were shaken up by the enormous disruptive event that was Covid. Nations are looking for sustainability now. They are looking for a green economy, and leaders are hankering after survival through innovation because they are at odds with an unseen enemy. In the 1940s, in the aftermath of tumultuous armed conflict, countries were looking at a World Order in which nations sought to prosper by themselves within a ‘live and let live’ narrative.

Leaders wanted to build nations that would cooperate with each other and coexist and that was good enough in the then newly established liberal World Order.

Times have changed. In the post Covid world, nations are coming to the realization that countries cannot survive in compartments. It is not a matter of coexisting anymore — it is sustainability as one world.

With this new paradigm shift, China has to be treated as a coequal by other world powers. There lies the wrong reading most “experts” have about China–Sri Lanka relations. The Chinese are indispensable as a leader in the cause to combat global warming — and the Chinese leadership earned their chops in this area by setting an example.

“More than anything, the world today needs a more dynamic multilateral architecture in order to deal with various other global issues like that of Climate Change, terrorism, poverty reduction, etc,” writes JNU scholar Samant.

This multilateral architecture will come about — but not before taking down the current set of realities and assumptions about the existing World Order.

“The liberal World Order whose existence was already at risk in the pre-COVID era has been further challenged by the crisis. Its effectiveness is gradually fading away and if the United States does not gather itself to revive the order back which it once established, the world is likely to witness the collapse of the liberal order,” writes Samant. It does not necessarily mean that China will be the dominant power in the future, but what is certain is that this is a transitional phase. In this great flux, it is pointless saying that Sri Lanka has erred in its China relations and make judgements on similar lines, because when every nation is sizing up its chances of survivability, etc., there is not much time for the old power rivalries to play out. Even if they do play out — which is not ruled out by most world watchers — they are not poised to play out in the way the world has been hitherto acquainted with.

So excoriating our current foreign policy and especially our China relations in this time of transition and tumultuous movement in the World Order is ridiculous. Quite apart from that, we are a democracy and the people have chosen a Government with previously robust ties to China.

The Chinese have been a gifted people for several millennia, and in that context they did not become a world power just yesterday. The world has realized that too. It is why China is the leader in several global initiatives, and is a leading example for how a sustainable economy could be built after Covid.

All this means much to most nations that forge close ties with the Chinese. None of these are satellite states of China and have no intention to be. That holds true for us too. We had historical ties on our own terms with China for millennia. The Chinese know this too, and they know we are not a satrapy and will never be. Those are just tall tales — made up by critics who want our China relations to be an issue to attack the Government with. It won’t work — especially in these transitional times, when most of the world knows how to conduct useful China relations without tuning out the rest of the world powers in the process.