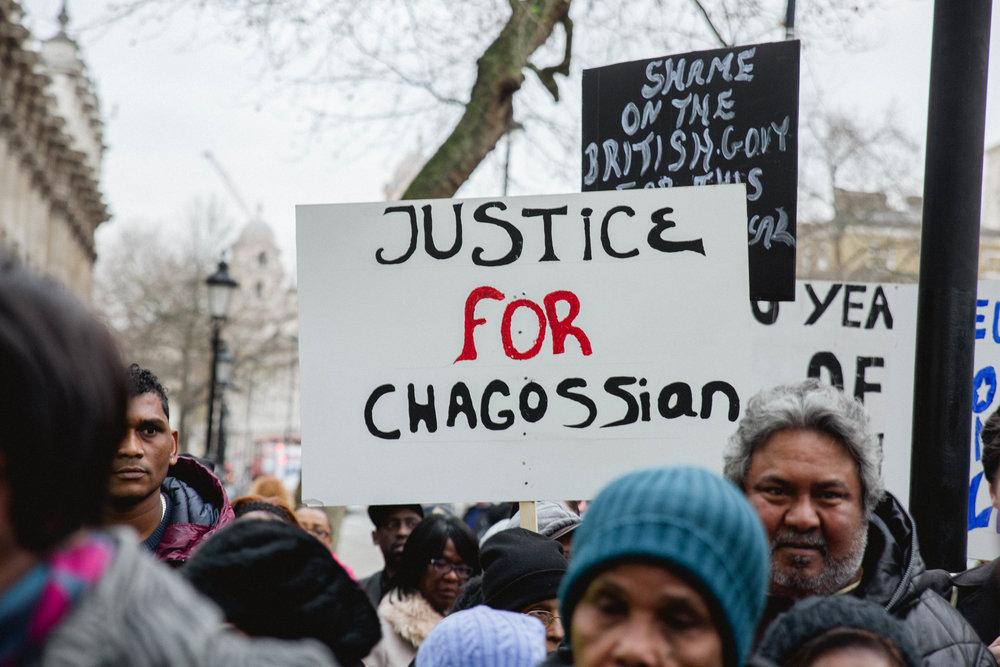 “The struggle of people against power is the struggle of memory against forgetting.” -Milan Kundera
The theme that underpins today’s editorial is based on the struggles of a people and the blatant violation of their human rights. The scene shifts to the Chagos Archipelago some thousands of miles away from the shores of Sri Lanka and making news was the emotional-filled return of five Chagossians to their native country in a symbolic gesture of freedom after more than 50 years of exile in Mauritius. They were deported to Mauritius by British officials to clear the archipelago of its population to make way for a US military base on the island of Diego Garcia.
The BBC in a report filed last week said a boat sent by the government of Mauritius arrived in the disputed Chagos Archipelago in the Indian Ocean after the country accused the occupying British authorities of “crimes against humanity”.

“On a clear warm afternoon deep in the Indian Ocean, five islanders who were thrown off their remote archipelago by the British half-a-century ago kissed the sand and cried as they stepped on to the beach of Peros Banhos, one of the larger atolls comprising the disputed Chagos Islands,” the BBC said.

“This is a great moment,” said Olivier Bancoult, one of the returnees, before lashing out at the British government as “racist” for ignoring Chagossian demands for the right to return to live on the islands.

“This is our birthplace. How can they deny us that right?” he asked. Immediately after stepping ashore, as Mauritian government officials began laying a concrete base for a flag post the BBC said. “This is not something unusual. It is normal for a nation to raise a flag over its territory,” Mauritian delegation leader, Ambassador Jagdish Koonjul said, pointing to a succession of rulings by the United Nations’ top courts recognising Mauritius’ sovereignty over the islands, and ordering Britain to end its “illegal occupation” of the archipelago.

Palm trees crowded in and around the old church, where 68-year-old Liseby Elysee another returnee said she had been baptised. The Chagossians quickly set about clearing coconuts and other debris from the roofless church floor.

“I am happy to be back. But I am sad that I have to leave again. I want to stay here permanently,” she said.
Two women, and three fellow Chagossians travelling on a boat chartered by the Mauritian government, have made history as the first people to step foot on their isolated archipelago without a British military escort and without seeking British authorisation.

Eminent investigative journalist, author and documentary filmmaker John Pilger in his book, ‘Freedom Next Time’, has a chapter titled, ‘Stealing a Nation’, in which he documents in detail the plight of the Chagos Islanders.
“Knowing this story as I do, I still find its criminal audacity almost incredible. In high secrecy, during the late 1960s and early 1970s, British governments tricked, coerced, finally expelled the entire population of Chagos Islands in the Indian Ocean in order to give the principal island, Diego Garcia, a paradise, to the Americans for a military base,” he says.

Pilger says the Chagossians were treated like Australia’s Aborigines in the nineteenth century; they were deemed not to exist. Not only was their homeland stolen from them, they were taken out of history.

Until recently, the foreign office website denied their very existence. Only a handful of MPs have referred to them in Parliamentary debates on Britain’s remaining ‘overseas territories’. Not a single politician whose policymaking had brutal consequences for the islanders has ever referred to them in his or her memoirs. I know of no work of scholarship on British foreign policy that describes what happened to them, with one admirable exception; the books of Mark Curtis, who has called them ‘unpeople’.

“Having abandoned them, seven British governments watched their vulnerable, faraway citizens live a nightmare in shanties in the Seychelles, and mainly in Mauritius, where they had been discarded, while ministers and their officials mounted a campaign of deception that went all the way to the Prime Minister. This scandal continues today — even after the high court in London ruled in 2000 that the islanders’ ‘wholesale removal’ was an ‘abject legal failure’,” he says.

Even through years of exile, they never allowed their struggle to be forgotten. We admire their unquenchable determination to return to their own, their native land and live in peace, dignity and freedom. It is often the case — like in Vietnam, Iraq, Afghanistan, Palestine and East Timor – it is the innocent men, women and children, who fall prey to the machinations of secret agendas of powerful countries.