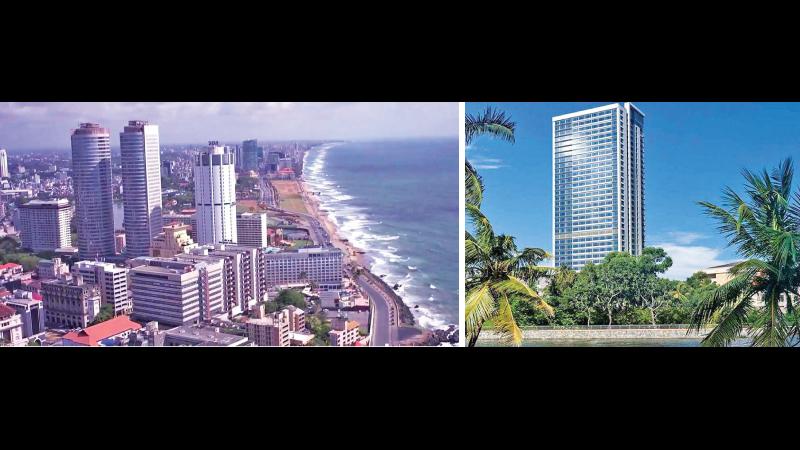 The moves to lease more State lands as an answer to the currency crisis and the economic crisis in general has tongues wagging. Are we selling off the family jewels — and, is this policy of leasing prime pieces of real estate, a case of purloining State property for the benefit of a few who stand to receive handsome kickbacks

State land leases may be nothing more than a case of privatization if done right, and if Sri Lanka Telecom came by being properly functional after privatization, is there a need to raise the privatization bogey each time a State land is up for lease?

Several years later, as far as this writer can see, they are not accusing the late Samaraweera of having stolen the family jewels. On the contrary they are lauding him in all quarters — especially right of centre liberal dovecotes — for being the hero and the champion that brought back Sri Lanka Telecommunications from the dead.

If that’s the case, there could be a salutary way of looking at the land leases that are said to be in the pipeline. The government has to find some way of earning revenue, especially the valuable foreign exchange upon which the entire fate of the country seems to depend.

However, before the deals have been properly explained and placed before the public for scrutiny, they have been slated as the devils compacts by those who relish taking this government to the cleaners, because this regime consists of people that rode to power on the back of patriotic rhetoric.

The question is whether patriotism is necessarily at odds with leasing State land to foreign entities with an eye on raising valuable foreign exchange? Take the case of the Sheraton that is coming up. The hotel is being built on land that was lent out on a 99 year lease agreement. The prime piece of real estate on which the Sheraton is being built was first offered to a Chinese firm in a similar lease agreement and for some reason the Chinese entity baulked. As a result the government began negotiating with Sheraton Inc., and the agreement was finalized in 2011 or thereabouts.

There were no vocal protests that were heard against the leasing of the Sheraton property presumably because the lease did not involve a Chinese Company. To this day there are various accusations about selling property to the Chinese, but nobody says anything about leasing land in a fancy quarter in Colombo at that, to the Sheraton chain.

Several more land leases of this nature i.e a la Sheraton, are not necessarily sellouts to foreign entities, that could be described as land grabs. If there are no local takers that are wealthy enough to take over and develop prime plots of land, these can be offered to foreigners as long as there are no kickbacks involved and the lease agreements are carefully scrutinized.

However, land leasing has to be done in a scrutinized manner in which the local landowners are not marginalized or ignored. This factor very importantly applies to land that is leased out to agribusiness. Those with good memories are aware of what a to-do resulted in leasing out a substantial acreage to Booker for example for the Pelwatte sugar plantations.

Projects such as Pelwatte and Kandalama were seen as egregious sellouts that would compromise generations. There were protests that were calculated to hive off investments from the country.

However, several years later the stakeholders in the area are often the first to acknowledge that these were investments that improved their quality of life because jobs were on offer and the employment was stable. Of course there may still be the disgruntled few who lost land and were relocated, and were embittered as a result. But on the whole these foreign investments are not seen today as pacts with the devil even though that’s how they were considered at that time.

However, large scale leasing of land for agribusiness such as what has transpired in certain African countries for example is not a good example of leasing out State owned property for long term cultivation to foreign companies. These leases have disempowered the original owners of these lands and often the stakeholders did not have any say.

In any event the leases that are in contemplation in this country at the moment are not of this nature. They do not involve any displacement of original landowners, at least on a large scale, because the lands are owned by the State.

Either that, or they are relatively small plots that have come by State ownership as a result of outright purchase from single individual owners. If such land leases are carried out in a rational manner so as not to compromise the interests of the State, there can be no argument against such arrangements especially at this juncture when foreign exchange issues are of paramount importance.

It cannot be forgotten that the government has declared an economic emergency. Around 50 plots of land are slated for lease and in this context there cannot be a Kandalama type furore over these projects provided the government can find any takers. That too must be a factor given the international investment climate.

Land value capture has been a tactic that has been used by cities for a long time to ensure that city residents have their basic amenities such as water and waste disposal delivered despite the increasing costs of providing these services. Basically land value capture takes place when higher taxes are charged from developers as the land values in cities increase.

Leasing land to foreign entities is a different form of land value capture, even though there may be naysayers who would severely contest that position. But if land can be used as a tool to take in the shekels from local entrepreneurs, it can well be asked why the same cannot be done with foreign investors too?

Of course it cannot be doubted that there are severe psychosocial barriers that have to be dealt with in leasing land to foreigners as opposed to locals. When individuals are told that there is a ‘foreign takeover’, that message impacts on how much of a backlash there is in society against renting of prime land to foreign companies.

There is no land lease phobia as there is in South Africa in this country for instance. Those are nations that had to restrict land ownership for historical reasons because the vast tracts of land used by white farmers were the image of inequality writ large. But, there are no land lease arrangements that create that type of hegemony in this country, even though there is still a hangover from colonialism.

Land leases of a piecemeal nature where the plots are small and are given out for specific purposes cannot generate that much of opposition. But when the plots to be leased amount to around 50 pieces of prime real estate, it’s easy to raise the hackles of people over the move because of the sheer number involved.

In South Africa they dealt with the apartheid era hangover by limiting land leasing to foreigners to plots under a certain specified acreage, the amount being relatively small such as fifty hectares. This way they dealt with the considerable psychological anxieties of a people who had been subjected to oppressive land use policies in the past. The policymakers have to be similarly imaginative here. They can lease out the 50 plots in Colombo and thereabouts, but they have to win over public opinion by convincing everyone that it is safe.