Law, Diplomacy and the Politics of Human Rights 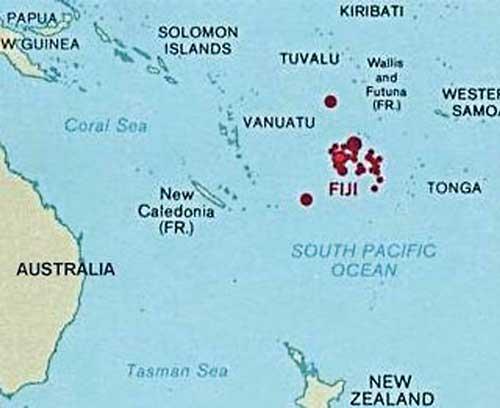 The Resurrection of Fiji

Sri Lanka will shortly be facing renewed scrutiny at the United Nations Human Rights Council in Geneva, where elements of the international community have been calling for action over unsubstantiated war crimes allegations.

This may lead to sanctions against senior officers of the Sri Lanka armed services and even political leaders.
Sri Lanka’s response has been characterized by the usual lack of preparedness, last minute flurries of activity and panic. There has been very little research, serious study or thinking. This has been the hallmark of Sri Lankan strategic and diplomatic thinking over the years.

The current president of the UNHRC is Fiji’s ambassador in Geneva, Nazhat Shameem Khan, a diplomat and former judge, who has been the Permanent Representative of Fiji to the United Nations since 2014. Khan, who served as the council’s vice president in 2020, was elected on 15 January 2021.

This story began at the UN Headquarters in New York in 2018 when Fiji won its bid for a seat on the United Nations Human Rights Council, receiving the second highest number of votes among all the candidate. This was a moment of global success for Fiji, giving this small pacific nation international recognition for its advancement and protection of human rights.

What is not widely known is that since independence Fiji has had a tumultuous recent history, characterized by ethnic tensions, military coups and recurrent suspensions of the democratic process. A closer look will reveal strong historic parallels and many commonalities between Sri Lanka and Fiji.  Both countries have had to face similar problems and the challenges. These parallels and commonalities are clear and immediate and deeply relevant.

Like Sri Lanka, an island nation, Fiji was colonized by the British during the 19th century. The second Governor of Fiji (1875-1880) was the Liberal Party politician and colonial administrator Sir Arthur Hamilton-Gordon, who went onto become the 16th governor of British Ceylon (1883–1890).

Hamilton-Gordon’s policies were to have decisive influence in the shaping the history of modern Fiji. He presided over the suppression of an uprising against the British in the central highlands. As with the suppression of the Kandyan rebellion in 1818, the British adopted a scorched earth policy, burning rebel villages and destroying fields.
In 1878 Gordon decided to import indentured labourers from India to work on the sugarcane fields which had replaced the cotton plantations. As in Sri Lanka, this began a wave of emigration which completely transformed the social, ethnic and political dynamics, leaving an enduring impact on the country. Whereas native Fijians or Melanesians remain the majority (54%), Indo-Fijians, the descendants of these Indian labourers now comprise 38% of the population. The tension between these two ethnic groups has dominated the politics of the islands since independence.

Unlike Sri Lanka, which has remained a democracy since independence in 1948, Fiji has seen several coups and many political revolutions. It also has a history of military rule, first by Colonel Sitiveni Rabuka, later Prime Minister from 1992-1999, and then Commodore Voreqe (Frank) Bainimarama, Prime Minister since 2007. Both men seized power when they were serving officers, before going onto to become elected political leaders.

In 1970 Fiji gained independence as the Dominion of Fiji. Until April 1987, it was governed by the Alliance Party, which championed policies of “multiracialism.” This government, which had a majority of Indian members in the legislature, was overthrown twice in 1987 in military coups led by Colonel Sitiveni Rabuka. These coups were driven by demands for the protection of majority rights and sought to entrench native Fijian dominance in any future government. To this end, Fiji declared itself a republic and revoked the 1970 constitution. In 1990 a new constitution, designed to concentrate power in the hands of Fijians, was established. Fiji was expelled from the Commonwealth in the same year.

It is an extraordinary story, the resurrection of a nation which was an international outcaste and its transformation into a human rights champion and a pillar of the international community. How did this turnaround take place?

Under the 1990 constitution, Colonel Rabuka was elected to parliament and went on to become prime minister in 1992. In 1999 Mahendra Chaudhry became Fiji’s first prime minister of Indian origin. Chaudhry’s premiership was bitterly opposed by Fijian nationalists, and in May 2000 he and his government were taken hostage and deposed by a military-backed group, claiming to be acting for indigenous Fijians. A counter coup was launched by the Commander of the Armed Forces, Voreque (Frank) Bainimarama. The rebels were neutralized and an interim military government was formed. This led to the restoration of democracy and new elections.

However, the tensions between the military and the elected government remained. In December 2006, Bainimarama seized power in another coup, removing the prime minister and establishing himself as the country’s sole leader. In January 2007 he restored executive powers to the President, Ratu Josefa Iloilo, who then named Bainimarama as the head of an interim administration. In 2009, the Fiji Court of Appeal ruled that the Bainimarama government was illegal. In response, President Iloilo abrogated the 1997 constitution and dismissed the country’s judges. National elections were postponed and another interim government appointed, again with Bainimarama as prime minister.

In 2017 Fiji presided over the United Nations Climate Change Conference (COP23). It was the first time a small island developing state had assumed the presidency of the negotiations. Fiji’s ability to preside over an international meeting of this calibre signalled its growing reinstatement within the international order. This was followed a year later, by Fiji’s election to the seat on the United Nations Human Rights Council

During this period Fiji was isolated and largely ostracized by western powers such as Australia, New Zealand, UK and Europe. Fiji’s participation in UN peacekeeping operations was also suspended. Neighbouring Australia and New Zealand were the loudest international critics and in 2009 Fiji expelled both the Australian and the New Zealand ambassadors, accusing them of interfering in the Fijian judiciary. Fiji also shut down many NGOs. In the same way as Sri Lanka, Fiji was forced to look beyond its traditional partners towards China, who refrained from involving herself in domestic politics.

“It was inculcated by the military government that you are largely responsible for your own survival because no one will come forward to rescue you. There was nepotism. The military put their own people in key positions but they were all qualified people who knew what they were doing. They were also expected to deliver.”

In 2017 Fiji presided over the United Nations Climate Change Conference (COP23). It was the first time a small island developing state had assumed the presidency of the negotiations. Fiji’s ability to preside over an international meeting of this calibre signalled its growing reinstatement within the international order. This was followed a year later, by Fiji’s election to the seat on the United Nations Human Rights Council.

It is an extraordinary story, the resurrection of a nation which was an international outcaste and its transformation into a human rights champion and a pillar of the international community. How did this turnaround take place?
Fiji’s permanent representative to the United Nations in Geneva, Nazhat Shameem Khan.

Many of the answers appear to lie in the efforts of Fiji’s Permanent Representative in Geneva, Nazhat Shameem Khan. Fiji opened its first Mission in Geneva in 2014, barely months before the country’s Universal Periodic Review at the Human Rights Council. Under this process the human rights situation of all UN Member States are reviewed every five years. Every year, 42 States are reviewed during three Working Group sessions. The result of each review is reflected in the Final Report of the Working Group, which then lists the recommendations which each country will have to implement. Khan proved herself a skilled diplomat and negotiator and a convincing advocate. Not only did Fiji succeed in passing the review; in less than three years, she has managed to secure the Presidency of United Nations Climate Change Conference and now the UNHRC.

One of Fiji’s pre-eminent judges, Khan was educated at Sussex University and Cambridge, where she obtained a Master of Philosophy in Criminology. In 1983 she was admitted to the Bar of England and Wales at the Inner Temple in London. In 1994 Khan became the first woman in Fiji to be appointed as the Director of Public Prosecutions and in 1999, she became Fiji`s first female High Court judge. In 2009 she became a private practitioner, concentrating on training lawyers and judges in human rights law, sentencing law, governance and litigation.

What appears to have gone unnoticed is the role played by many Sri Lankans in helping revive Fiji’s judicial sector and resuscitate the country’s international reputation. During the years when Fiji was frantically trying to establish law and order, many Sri Lankans played key roles in rebuilding the country. Some of the most important judicial offices were all held by Sri Lankans and until 2014 the Fijian judiciary was heavily dependent on Sri Lankan expertise. This was despite the considerable pressure which was put on many Sri Lankans not to live or work in Fiji. In 2009 Fiji’s chief justice, Anthony Gates, accused Australia and New Zealand of telling a number of Sri Lankan judges that they would be banned from entering Australia or New Zealand if they took up appointments on the Fiji bench.

Although as a country Sri Lanka has not helped Fiji, there remains a deep recognition and gratitude towards the many Sri Lankans who lived and worked in the country during this time. There are strong connections and in some cases enduring relationships. Shameem Khan herself has worked alongside Sri Lankan jurists and is very conscious of their skill, expertise and integrity.

The prima facie evidence suggests that Sri Lanka could be dealing with a sympathetic interlocutor with whom it already has many connections. Even at this late stage however, there are options and strategies which can be pursued.

This administration has three to four research institutions at its disposal, the BCIS, the Institute of National Security, the Lakshman Kadirgamar Centre and the Kotalawela Defence University. Yet there has been no study or appraisal of these potential links and their possible connections. It is clear from the public discourse that we have no idea about whom we are dealing with, what their backgrounds are and where their skills and attitudes lie.  Perhaps we have not even begun to think about it.

The resurrection of Fiji seems to have taken place within a decade, much the same decade that Sri Lanka was gradually being isolated from the world. The parallels suggest that Fiji achieved its current position through the implementation of a concerted and sustained strategy. It shows what could have been done and how.