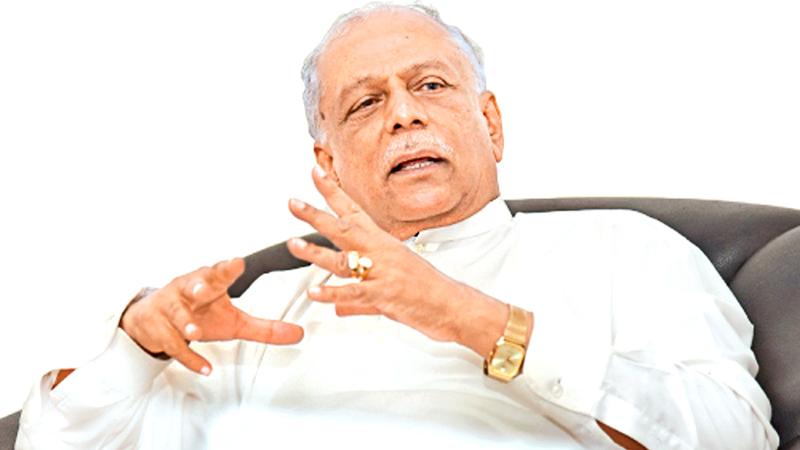 Foreign Minister Dinesh Gunawardena said that the United Nations Human Rights Commissioner Michelle Bachelet’s report does not reflect the reality on the true ground situation in Sri Lanka and it has not properly studied the progress that has been made.

The Minister in an interview with the Sunday Observer said he could not understand as to why these allegations are made without studying the ground realities. He said the Government has already responded and further explained areas where Sri Lanka is committed to work with the United Nations (UN) system since we are also a member of the UN.

Minister Gunawardena said Sri Lanka should follow a collective understanding in in international affairs like other countries. Our call for the principles of sovereignty and democracy to protect our motherland should be the priority rather than working to destabilise it based on very short-sighted views.

Q: How is the Government prepared to face the upcoming UNHRC challenge in Geneva?

A: The United Nations Human Rights Council (UNHRC) as usual has overlooked many key fruitful and factual areas and made general recommendations in the annual report. Our Foreign Ministry has replied to most of the issues raised including the key area of UNHRC Resolution 30/1 where we withdrew from the co-sponsorship.

However, we have effectively stayed on to the pledges that we made last year and the other issues that have been added on are all internal matters of the Government. The President’s election which we feel has no relevance to the matter is being mainly discussed.

Sri Lanka is a longstanding parliamentary democracy and the people elected a new Parliament with an overwhelming majority. The President received a strong mandate and we are one of the oldest democracies in Asia. I don’t think that small internal issues and references contained in the UN High Commissioners report would play a much important role.

Q: When the entire world accepted that the Liberation Tigers of Tamil Eelaam (LTTE) was a ruthless terrorist outfit then why should certain sections attempt to misinterpret the battle launched against them by our war heroes?

A: Sri Lanka defeated the LTTE which was proscribed by the world as one of the most dangerous terrorist organisations. Various sections have been trying to raise issues such as the diaspora by providing misguided and imaginary advice in a bid to lobby the support from some Western countries.

Let us not forget even at the moment, these countries renew the LTTE proscription because of the possibility of their emergence. Sri Lanka has made tremendous progress in the restoration of living conditions of persons who were affected in the North and the East and to bring back normalcy in the areas.

Q: Why are these alleged human rights violations dragging for so long at the UNHRC? Is it mainly due to the former Yahapalana Government’s decision to co-sponsor the UNHRC resolution 30/1 along with the US?

A: The former Yahapalana Government’s anti-democratic and anti-people measures paved the way to co-sponsor the UNHRC resolution 30/1 against our country. Our Security Forces had brought the victory after 30 years by defeating the LTTE terrorism. Inviting foreign judges to make judgments on our internal matters is not permitted in our Constitution.

When we withdrew from the co-sponsorship of the resolution 30/1 at the last year’s UNHRC session, the President pledged that a Supreme Court judge will head a Commission of Inquiry and a domestic mechanism to go into any so-called violations that is being put on Sri Lanka.

There have been confidential reports of the British Foreign office released and quoted in the House of Commons by Lord Naseby which gives new opening to the realities of those who have praised the battle launched against the LTTE by our security forces.

Q: It seems certain Tamil political parties in the North such as the Tamil National Alliance (TNA) are also backing the UNHRC allegations levelled against Sri Lanka. Your comments?

A: The TNA has been always taking an extreme position as their goal is not the day to day development, better livelihood and better prospects for our countrymen who are living in the North, East as well as in the rest of the country. They are interested in their political structure with falsehoods in a bid to lobby groups in Western capitals.

However, these same Tamil political leaders in the North who levelled baseless allegations against our war heroes and stressed the need for bringing them before the UNHRC called upon the people in the North and East to defeat Mahinda Rajapaksa at the 2010 Presidential Election and elect the common opposition candidate former Army Commander Sarath Fonseka as the President.

The “Channel 4” was yet another such drama enacted to level such allegations against Sri Lanka. However, we have responded and categorically rejected those allegations levelled against us.

Q:: Do you think that friendly nations will stand by Sri Lanka to collectively face any challenge posed by the forces with vested interests at the upcoming UNHRC sessions in Geneva?

A: Sri Lanka has always won the support and solidarity of our friendly nations as a pioneer of the non-aligned movement, a member of the Commonwealth and the South Asian Association for Regional Cooperation (SAARC).

The dedication which Sri Lanka has been working for over 60 years has also contributed to help the United Nations (UN) network. We hope, if we are given a reasonable and a fair debate to exchange views if possible, our viewpoint will be accepted by the majority.

But let us not forget the UNHRC is holding discussions in Geneva on February 22 as a virtual conference where foreign delegations, ministers and representatives will not be able to gather, discuss, negotiate or debate issues as we have done before.

Q: Don’t you think all the Government and the Opposition political parties irrespective of their political differences should join hands to defeat the “Geneva challenge”?

A: Sri Lanka should follow a collective understanding in international affairs like other countries. Our call for the principles of sovereignty and democracy to protect our motherland should be the priority rather than working to destabilise it based on very short-sighted views.

Q: What is the reason for the Government to reject the United Nations Human Rights Commissioner Michelle Bachelet’s report? Is the Government of the view that she has gone beyond her mandate?

A: Based on so many issues the report is not based on the real ground situation since it has not properly studied the progress made.

The Covid-19 pandemic has affected the entire world. If we look over the past hundred years, the world has not been shaken in this manner. However, Sri Lanka has been able to control the Covid-19 situation.

It should be understood that amid the Covid-19 pandemic, the lives of the people have been protected in our country irrespective of where they live. That has been the highest priority during this Covid-19 pandemic situation.

I could not understand as to why the allegations are made without studying the realities. It is purposely being repeated in the UN Human Rights Commissioner’s report. We have answered and further explained areas where we are committed to work with the UN system. We are members of the UN system by contributing for the betterment of it.

Q: According to you, why have certain Western powers levelled baseless allegations against our war heroes?

A: Our war heroes acted on behalf of the entire nation. They also gave protection to Tamil political leaders as well. We will not provide any room to initiate any action against them or bring them before any international war tribunal. Our war heroes were engaged in a humanitarian mission. Therefore, we have requested to withdraw these baseless allegations levelled against our war heroes.

Q: Concerns have been raised that justice has not been meted out to the aggrieved parties?

A: Any citizen can seek the assistance of the judiciary regarding any injustice that may have been caused. They can also go beyond the incidents that happened in the past and act according to the Paranagama Report and the LLRC Report. In addition, anybody can separately give his/her own evidence.

Q: The Opposition MPs at the Party Leaders’ meeting held on February 8 had demanded to table the Presidential Commission report on the Easter Sunday attacks and Political Victimization in Parliament. Would you like to comment on this?

Q: The Opposition political parties have accused the Government that through the Presidential Commission report on Political Victimisation there are attempts to deprive the civic rights of several opposition members of Parliament and ex-MPs. Your comments?

A: First this report has to be released and it has to be submitted to Parliament through the Speaker. Then we can discuss what is contained in the report.

It is the people’s right to know what is most important rather than jumping into conclusions without reading the report.

Q: The Sri Lanka Podujana Peramuna (SLPP) General Secretary Sagara Kariyawasam at a recent media briefing said that Minister Wimal Weerawansa should publicly apologise for his comment to a local weekend newspaper where he claimed the President should lead the Party. Would you like to comment on this?

A: As the Leader of the House I would like to say that these are internal party matters which can always be overcome through discussions.

Q: The Opposition in Parliament raised concern on the removal of Special Task Force (STF) security given to TNA parliamentarian M. A. Sumanthiran. Your views?

A: It is entirely up to the Defence Authorities to make such decisions. Different people have different numbers as well as different divisions for providing security. So, it is up to the Speaker if there is any matter to be considered.

Q: There is speculation that the names of several prominent figures of the former Yahapalana Government are mentioned in the final report of the Presidential Commission which probed the Easter Sunday attacks. Will the Government be able bring the culprits who are held responsible for this tragedy to book without delay?

A: The Commission had been sitting for a long time. Certain recommendations have been made by the Presidential Commission of Inquiry.

So, it has to be known to the public and Parliament. If there is any action to be taken by the judiciary process it will also be discussed.